IDW has been communicating a lot with Sonic fans on their Facebook page. Case in point, they just concluded a Q&A, and there was some interesting things to come from it. I live-tweeted them out, so here’s what we learned. Note that each tweet came with a screenshot of the question, so I recommend looking at the screenshots to see what exactly was said.

First bit of new info we got from the IDW Q&A pic.twitter.com/RQ57U0YN42

Some more info, in regards to game references. pic.twitter.com/i4L4Sq2KGM

The wording on that "vague" portion makes me raise an eyebrow. pic.twitter.com/p7COBwhUPX

More creators are to be announced. pic.twitter.com/Qg9ZMDv8ax

I'm not sure if this is new or not, but whatever the case… pic.twitter.com/zFPdnFkC1N

The one above confirmed that a fan letters/art column will be a thing.

This isn't really surprising, but it looks like the IDW Sonic team just confirmed an appearance at SDCC 2018 pic.twitter.com/3ypg8cSIOK

Not happening this year, but "maybe in the future". pic.twitter.com/p4s0XabXRC

"none of the events of the games are canon, but something similar may have happened". pic.twitter.com/2VbjS8aGR0

They addressed the whereabouts of Blaze and Cream.

…They have no idea. pic.twitter.com/yRB83dZIn9

He'll "have some swagger". pic.twitter.com/xftbSkenAK

Long story arcs will be on the way. pic.twitter.com/wlU01W2yFD

In case you didn't already figure, the Chaotix will be in Sonic #5. pic.twitter.com/L4E0dVeSKE

By the way, 10+ people have asked about the Freedom Fighters.

I'm 100% sure we learned about this last year, and it's pretty much a given anyway, but in case you didn't already know, Modern Sonic will be the focus of the comics. pic.twitter.com/qlZp9Cwbdi

Tyson Hesse isn't scheduled for any IDW Sonic work postlaunch, but both David and Joe say he's welcome to come back and work with them more. pic.twitter.com/f7yxVcH815

The comics will have an "interesting cast of both new and old characters".

David from IDW has "read some of the old comics". pic.twitter.com/jM1spuMfi4

And that's a wrap. Q&A is finished, but they did say they'll look back and sift through any that they missed.

SEGA On Sonic Movie: “We Believed Strongly The Sonic Brand Needs To Be Treated Right” 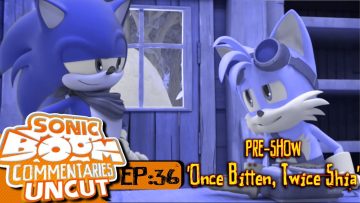