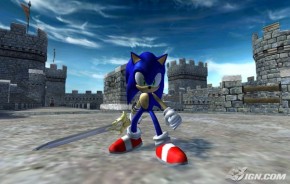 Slash it up
Despite never having handled a blade before Sonic is no slouch in theswashbuckling department. Combat starts out simply, but expect him to learn some flashy new abilities as the hedgehog’s prowess as a knight grows.
Screenshots from top to bottom 1-5
1 –
Sonic’s learnt from the Zelda games. Here’s a sweeping sword strike.
2 –
A nifty flying kick. mid-air sword strikes are also possible.
3 –
Using the nunchuk Sonic can block enemy attacks before countering.
4 –
Sonic’s trademark homing attack now creates an ultra fast, forward lunge.
5 –
Sonic can smash stuff up – he even cuts through stone.
Ride to hell
In this sequence Sonic boards through treacherous enemy territory. Instead of plumping for the scenic route he chooses to fight off a squad of crack knights armed with gauntlets…
Screenshots left to right 1-3
1 –
All aboard! It doesn’t look like great weather for sightseeing. Just as well because we’d rather ruck.
2 –
Uh-oh, more of ’em. Sonic readies his sword for the onslaught as his enemies leap into action.
3 –
Take that you cur! Timing is the key to dispatching enemies quickly and effectively.
Bottom pic on Page 4 –
Sonic –
He might be in strange surroundings but Sonic is still his cheeky wise-cracking self. Most of his familiar moves remain too, but some have been retooled to use his sword.
The knight –
Knights are supposed to be chivorous, but these fellas are anything but. We’ve seen several different baddies and are hoping for some mythical creatures too.
The setting –
Don’t expect an accurate retelling of the Arthurian legend. After all, The Secret Rings managed to shoehorn dinosaurds into the Arabian Nights.
Text under pic –
Death from above: It’s nice to see that Sonic has retained some of his trademark moves. The trusty old Sonic spin attack is made all the more deadly by his flashing blade.
GM Verdict
GM Loves –
+ The graphical style
+ Using the sword to get around
+ A ‘different’ Sonic game
GM Hates –
– That the Wiimote isn’t always the most reliable way of recreating sword-based combat.
Most wanted rating 4/5
Combining the speed and thrills of Unleashed with the RPG elements of Chronicles and the best bits of Arthurian legend this could be something special!
Can’t wait?
Most like: Sonic and the Secret Rings 80%
Out sooner: Sonic Unleashed, Nov

All of that from Shadzter.
Check out the following links to veiw the scans!
Scan 1
Scan 2
Scan 3
Scan 4
Stay tuned for more Sonic & the Black Knight posts in the future here on TSSZ news.