Would you ever have thought that two of the most evil and most cunning bad guys in the whole history of video games, would ever be in a film together?

Same here but, thanks to a source from a member from DVDizzy and thanks to NintendoLife also, we can see in a picture the two villains plus also Street Fighter’s very own Zangief sitting next to each other in Disney’s new animated film “Wreck-It Ralph”. 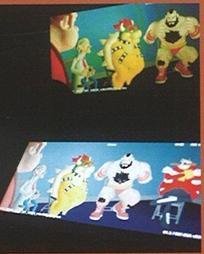 Here is the actual picture of the three characters (EGGMAN, Bowser & Zangief) together.

With looking at this picture it looks like they are sitting down talking about something, this could either be like a talk show type scene where there talking about themselves or, they could be planning to team up and take over the Universe or kidnap princesses i’m not quite sure.

All in all this is a very good find and we could get ourselves a movie from Disney, which will feature are very own Evil Genius and the King of the Koopas together in a room, we shall of course keep you updated as soon as we get more information about this new film Wreck-It Ralph.