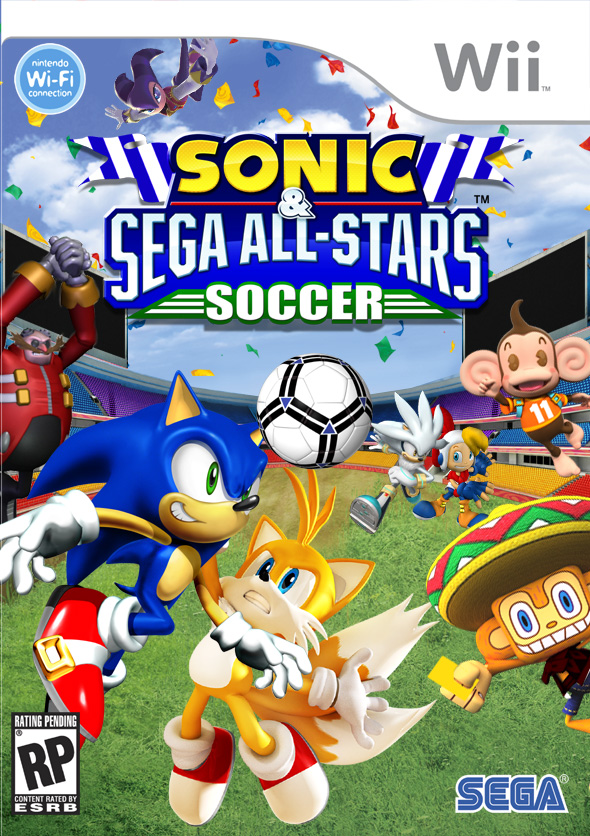 SEGA have just released a press release and an early pack shot design for a new All-Stars title, it seems that All-Stars Racing has gone down a treat if SEGA want to press forward with the series.

There’s no mention of SUMO Digital being involved at this stage but one has to assume they’ll continue their work on the franchise.  Click on the pack art to see it bigger.

The Press Release is below:

The title, to be known as Sonic & SEGA All-Stars Football in European territories, pits Sonic and his fellow characters against each other in classic “5-a-side” soccer match format on pitches set in lush stadiums, underwater enclaves, rainforest canopies and a-top city skyscrapers – anywhere is good for a kickabout! Fan favorites from previous All-Stars games such as Dr. Eggman, Tails, AiAi, NiGHTS and many more return to join Sonic all of whom have their own set of skills which you will have to master. Having one All-Star isn’t enough this time, you need an entire team of All-Stars!

“Sonic & SEGA All-Stars Soccer brings Sonic back to the soccer pitch for the first time since Virtua Striker 3.” said Jerry Foxshold, Product Manager, SEGA of America, Inc. “ASS is much different to ASR (All-Stars Racing), there’s a new degree of tactics – in order to be an ASS master you need to bring a ASS team with balance, flair and that little extra something. We can’t get enough of ASS here, and we can’t wait to show ASS to the world.”

Winning isn’t everything, but who likes to lose? Once again each character has a specific All Star move geared towards their current position on the field a Super Sonic shot might prove too hot to handle from Sonic as a striker, but a inbound goal might well be saved by a Super Sonic interception. Power ups and weapons may also appear around the pitch and can be used to gain an advantage fair or foul against the opposition to ensure victory – watch out though, as referee Amigo is a hard enforcer of the rule book!

Can Billy Hatcher roll his way to victory? Will NiGHTS fulfil your dreams of cup glory? Will Sonic be winning the golden boot? Kick-off starts in 2011. For more information please visit: www.sega.com/allstarssoccer.

tHE tANGY: whY silver’s the best