Traditionally, all of the big game releases were centered on a two month period prior to the holiday season. The “the holiday season” that gets underlined, capitalized, and printed in different colors on most calendars. It’s been shocking how close some games have cut it just to show up on store shelves December 23rd, but in the publisher’s eyes, it was going to be worth it. They had to be under the tree, or in the stockings, or on fire on top of the menorah… because there were no suitable release dates after that for ten more months.

Well, publishers have finally gotten the hint that no, their game doesn’t have to come out November/December. Which for plenty of reasons is a good thing, but it’s ultimately led to one very bad thing: Christmas II. Or if that’s not your lean, Revenge of Kwanzaa. Ni-Hanukkah? We’re not going to run the holiday allusions into the ground too much more this article, so let’s settle on “Giftmas II.”

Giftmas II has become the safe developmental slide date. It’s not unusual that a few holiday games missed the actual holiday, with sane companies taking the bold step of not pushing broken crap out of the door early for maximum holiday exposure. To hit closer to this site’s target base, the Wii Sonic Storybook titles landed roughly during the Giftmas II period, taking an approach closer to “it’s done when it’s done” more than nearly all of the 3D Sonic titles prior or since. It’s a stark contrast to the two major 360/PS3 platformers, which were both rushed for mid-November releases. While it would be foolish to assume the Storybook games had no targeted release date, they had much more of an option to shift and slide as needed, over a holiday game that’s perceived to be actively losing sales for every week it’s not sitting on shelves.

That’s changed as now, the secret of Giftmas II is out. Cheers erupt from developer cubicles as they realize they don’t need to completely neglect their families this year while working on code for a Day 1 patch to correct issues that shouldn’t even be in the retail release. They decide to pick a month. January? No, too soon after the spending season. Too much debt already in place, gift cards only go so far, and most stores focus on clearance sales, not new products. February? Well, that’s getting there… April? Tax time in the US, not an ideal time to hook parents and poor gamer adults. Then one voice pops up, “How about March?” They all nod, that’s perfect.

Now imagine that every single developer did this. Strike that, you don’t need to imagine it. They practically did.

Again, March game releases are not unheard of. What is different is a lot of publishers specifically announcing what would normally be holiday titles as March releases. Like there’s an expectation they should be ready for Santa to bring down chimneys this season, but the publishers know there’s no real chance of getting their golds mastered in time. Or maybe they believe they’re outsmarting the other publishers by focusing on the after-holiday season instead of sparring for your Black Friday cash. In years prior, they would’ve been. This is not, however, years prior. At least, that’s what my caveman buddy says.

The worst part about Giftmas II is that games are going to get overwhelmed. Even if you know the day’s coming, even if in other circumstances you would buy every single game coming out, you’re not going to purchase most of them on release day because you’re not an idiot. You know you have a finite amount of time to play games, and buying games well before you can even begin to play them means you’re just cheating yourself out of potential later deals. Most pre-order goodies can’t hold a candle to saving $20 or $30 on a game release, and if your delayed purchase isn’t delaying your intent to play it, you as a gamer don’t lose out. Dumping a bunch of important games onto the market all at the same time means people prioritize, and titles will invariably get lost in the shuffle. 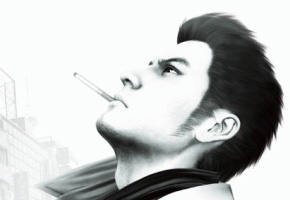 For example, Sega has finally shown a change of heart, announcing a US release of Yakuza 3. The original Yakuza was a high profile localization experiment that performed poorly. Yakuza 2 was a low-profile release only put out as a sort of favor by Sega to their fans, and it did even worse than they hoped. The series was effectively dead in the US, but now it has a second chance at life. Except that chance at life falls at some indeterminate time during March 2010. Even assuming that the potential buyer is exclusively, and I mean exclusively, a PS3 gamer, it’s still going up against other titles like Battlefield: Bad Company 2, the added-content re-release of Resident Evil 5 complete with Motion Controller compatibility, God of War III, and something involving Fantasies, the 13th one finally. The examples I’m giving are from an out-of-date release list, and I’m sure there’ll be even more announcements coming up, as there naturally would be. It’s only going to get more crowded from here.

The crazy thing is that this was kind of a step in the right direction for publishers. They obsess so much about Chrismahanukwanzakah; now they’re finally taking steps toward spreading out their blockbusters more evenly across the year. Except they all picked roughly the same time frame to spread them to. And you know with each passing announcement, an increasing number of those publishers are slamming their heads to their desks, yelling, “Pokemon comes out when?!” Let’s hope at least a few of those publishers turn that calendar page once more, and realize April isn’t such a scary month after all. It has Find-A-Rainbow Day, what more could you want?