Yes that’s right you’ve heard it here or via SEGA itself, the one and only arcade racer Daytona USA that still today is as awesome as ever is coming once again to your TV screens on Xbox Live Arcade and PlayStation Network.

So get ready to start your engines as here is the official Press Release by SEGA:

LONDON & SAN FRANCISCO (October 12th, 2011) – SEGA® Europe Ltd. and SEGA® of America, Inc. today announced the triumphant return of thecherished arcade racer, Daytona USA™, coming this month to home consoles. Speeding out of the past from its 1993 debut, Daytona USA will be racing onto Xbox LIVE® Arcade for the Xbox 360® video game and entertainment system from Microsoft, and PlayStation®Network. The classic title has been tuned up and overhauled with enhanced graphics, steering wheel support and, for the first time on home consoles, online multiplayer. Daytona USA will be available as a speedy digital download on October 26th for XBLA (800 Microsoft Points) in North America and Europe and October 25th for PSN in North America. Daytona will release on PSN late November in Europe.

Since its arcade debut, Daytona USA has stood the test of time as one of SEGA’s top racing titles, thanks to its colorful tracks for drivers of all skill levels, breakneck-speed gameplay and competitive, head-to-head multiplayer options. The game’s iconic soundtrack is instantly recognizable to SEGA and racing fans everywhere, and every detail of the original hit has been meticulously preserved, polished and presented for the ultimate version of Daytona USA.

The re-release of Daytona USA features:

Fresh Oil and a New Coat of Paint:
Experience the classic retro graphics of the original arcade hit in an enhanced,16:9 widescreen format

Let’s Go Away:
Relive your glory days of racing to the sounds of the original Daytona USA soundtrack, also available in Karaoke Mode (admit it, you know you’ve been singing along anyway)

Reach the Winner’s Circle:
Challenge AI opponents in Arcade Mode, race the clock in Survival and Time Trial Modes, and trade paint with up to eight players in online multiplayer to place on the worldwide leaderboard

And just to get you into the grove for DAYTONAAAAAAAAAAAA!!!!!!! (Sorry I had to do it), here is the Official Announcement Trailer:

So save up you cash or your points and go and get Daytona USA, out October 25th on PS3 (US only, Daytona will be available in Europe late November time) & October 26th on 360 (US & Europe) and i’ll see you on the race track. 😀

Shinobi 3DS Invites You To Jump The Shark, Amongst Other Things 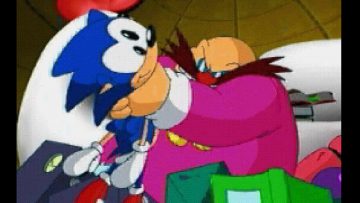 “Sonic – Man Of The Year” from Sonic Jam