Home Articles VR vs. VR vs. Fiction – Vol II: Games That Want To Play You 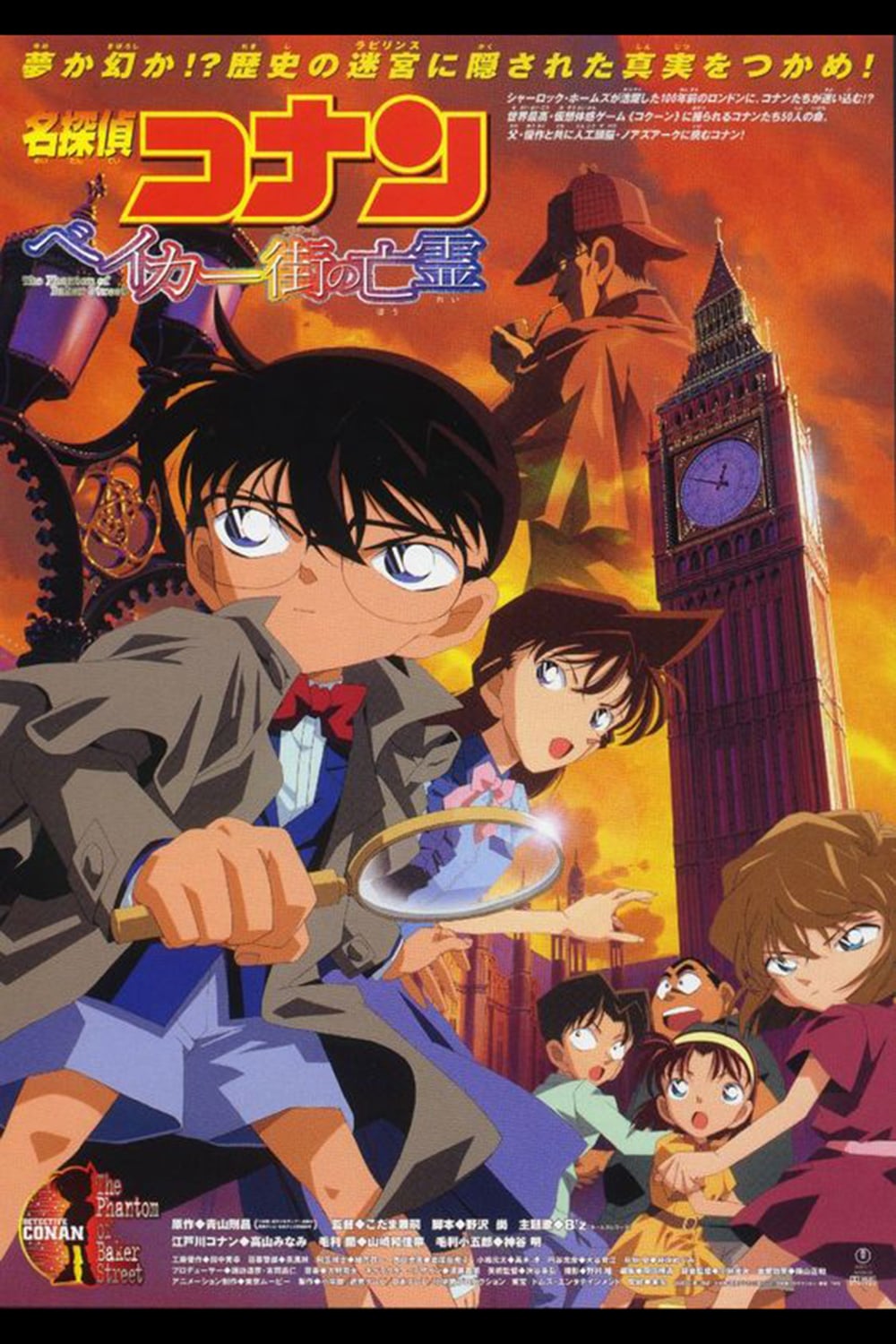 We’re already in May and you know what that means. Events season is almost on us once again. An endless Summer of this and that, and probably even more of ‘this’ on top of ‘that’.  Over the next couple of weeks there’s two events that VRFocus will be gazing at intently. First of there is Facebook’s F8, which no doubt will be talking about data privacy quite a lot under the circumstances and then after that next week we’ve all got three days of Google I/O to sit through. So, I expect we’ll be getting lots of ARCore related news then.

That is then though; so as things are the tiniest bit on the quiet side let’s dip back into the world of fiction for this week’s VR vs. As you may recall from reading part one in this sub-series I’m looking at instances in fiction where virtual reality (VR) or any kind of immersive technology similar to it has been used, as well as any head mounted displays (HMDs) that might fit into that bracket. 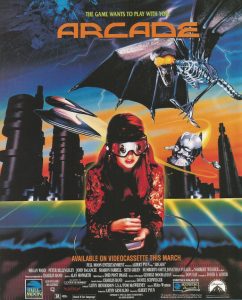 Since we started with a film last time in Hackers, let’s do so again this time around. There’s a very good chance you don’t recall the film Arcade in the slightest as it was a 1993 B-movie. For those that don’t the film focuses on the character of troubled teen Alex Manning, who through a combination of bereavement and usual teen angst is not exactly having the best of times. Heading to a local arcade called Dante’s Inferno she and her friends come across a brand-new VR gaming title called Arcade, a sort of sci-fi VR version of the television series Knightmare, which is being test marketed to the arcade’s clientele by Difford (John de Lancie) – the CEO of Arcade‘s developer Vertigo/Tronics.

Difford is really, really keen to get people’s thoughts. In fact, he even gives out free samples of the home version of the VR kit to the kids. Complete with an HMD, joystick and haptic gloves. Unfortunately, it seems there’s something of a snag when playing Arcade. Namely if you lose you also lose your soul to be imprisoned in the title. (A videogame being given away by Q might not be on the up and up? You don’t say!) All this soul snatching is actually the doing of the title’s villain, who is also called Arcade.

So, go to the arcade, to play Arcade and defeat Arcade. What could be clearer?

Arcade’s A.I. is quite advanced, it’s also quite deranged. Mainly due to the fact Vertigo/Tronics used the brain cells of a boy that had been beaten to death by his mother to make Arcade more advanced and realistic. Arcade instead begins taking control of the minds of the teenagers that have been playing the home version, as well as stealing the souls of the players from Dante’s Inferno – and you thought sim sickness was bad!  Alex and friend Nick have to do battle with Arcade within the videogame itself, to free the stolen souls from the virtual world, but Arcade isn’t going without a fight.

If you think this whole ‘getting sucked into a computer game’ thing is a bit TRON-like, well there was the threat of a lawsuit about similarities with Walt Disney’s film. Not on the film plot but regarding some of the CGI which looked a bit too similar to that of TRON‘s light cycles for Disney’s liking and it had to be redone. (The second CGI is very of its time.) Oddly enough the in-game avatar’s helmets look a bit similar to those we’d eventually see in the proof of concept video for TRON Legacy. 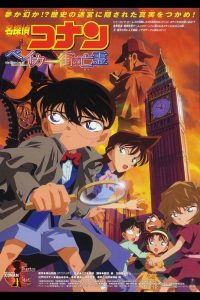 For the next item we’re dipping into the world of Japanese anime and Detective Conan, which was localised in the U.S. as Case Closed. Again, there’s a very good chance you don’t know Detective Conan, which is a shame, since it’s amazing. Do let me write some backstory. Detective Conan is the story of a high school detective prodigy Shinichi Kudo, ambushed on a case by members of a shadowy organisation and fed a prototype poison to do away with him. The poison doesn’t work and instead Shinichi shrinks. Biologically rewinding to a six-year-old body – but his intellect remaining the same. That may sound a slightly ‘cute’ premise, with the shrunken Kudo now being a child detective but it isn’t.

Shinichi takes on the identity of ‘Conan Edogawa’ and with the help of only a couple of allies tries to get through life as a six year old at the same time as helping his childhood friend Ran’s slightly bumbling private detective father solve cases (without him knowing), looking for clues into the ‘Black Organisation’ responsible for his predicament and doing everything within his power to keep them from finding out he’s actually still alive – because if they find out they’ll kill him, and Ran, and anyone remotely connected to him to protect themselves.  People die in Detective Conan. A lot. To give you an idea, the first episode – which gets Shinichi shrunk – see him investigating a murder on a roller coaster where a rider is decapitated. The solutions to cases are usually extremely detailed, with all manner of pretty high-brow tricks – and half the time there’s also a gut punch at the end when you find out the criminal might have had their reasons for doing what they did after all.

It’s been going for a long time – yup, it’s still in production. In manga form since the 19th of January 1994 and in animated form since January 8th 1996. Detective Conan is, at the time of writing, the sixteenth longest running (in terms of episodes) anime series of all time with 898 episodes and #8 in those still in production. It’s had more episodes than either One Piece or Naruto, to give you an idea.  It’s also had a whopping 22 cinematic releases, not including one film that was a crossover with Lupin the 3rd.

In the sixth feature film, The Phantom of Baker Street, Conan and his friends find themselves trapped in a VR video game called Cocoon, powered by an A.I. system known as Noah’s Ark, the last creation of a ten-year-old genius before his apparent suicide from jumping of a skyscraper. (Yep, kids committing suicide. Detective Conan can get very dark.) At a special premiere event for the VR system which sees 50 children trying out the massive VR system, in a strangely similar situation to Arcade Noah’s Ark takes control and tells those assembled that if no one solves the game it will kill all the children.

As the game continues, the virtual world taking on the form of a period Sherlock Holmes adventure more and more children are eliminated from the simulation after incurring injury or making mistakes. Things are connected with a real-life murder being investigated at the same time and there seems to be connections to Jack The Ripper in both instances – the well-known serial killer popping up regularly in the simulation.

In the end, only Conan, a mysterious boy and Ran are left – the boy turning out to be the embittered ‘spirit’ of the dead ten-year-old (and Noah’s Ark), who had been experiencing the journey with them. Unlike in Arcade however, in this case the children are let go as the spirit of the dead boy is satisfied with the outcome of someone being able to best him and maybe understand him. The gut punch I mentioned? He proceeds to then delete himself. Thus, we have a child commit suicide twice in the same film. Geez.

So there we go. Two works of fiction that use VR in their plot from very different backgrounds and that do so in a reasonably similar way. VR vs. will return next week.