Home Articles VR vs. VR vs. Fiction – Vol I: Their Only Crime Was Curiosity 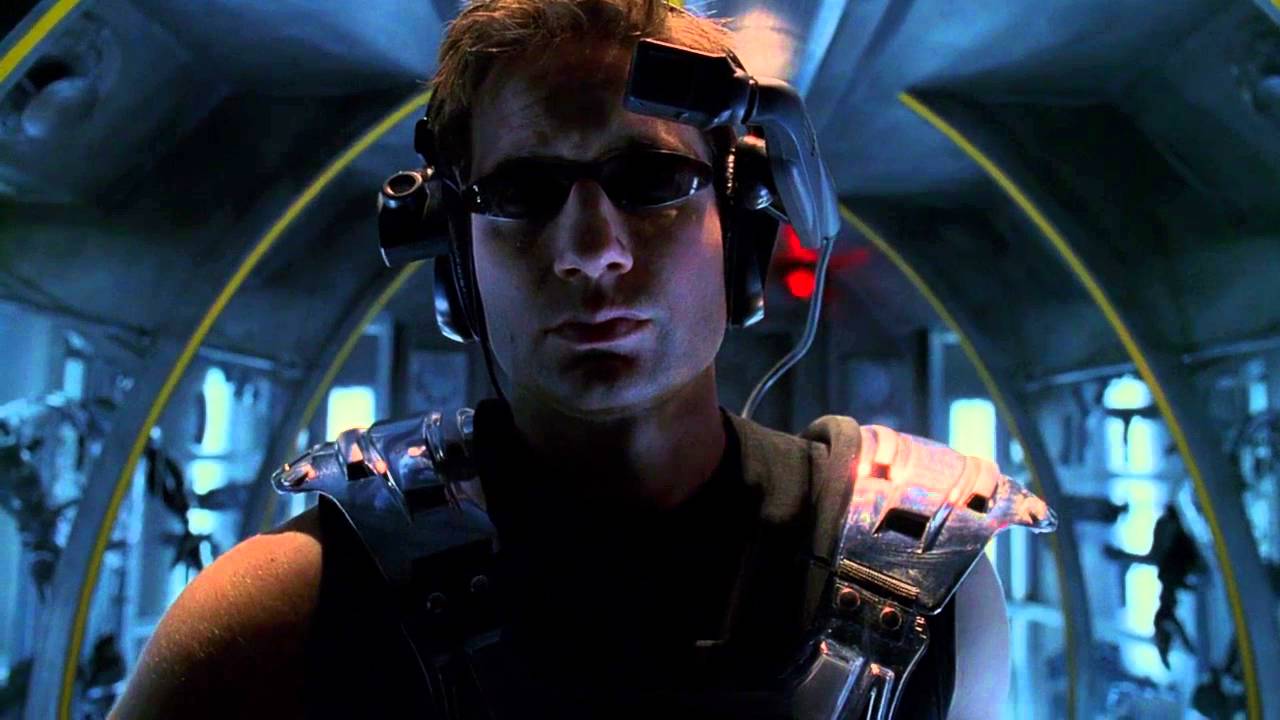 It has finally happened. WipEout has come to virtual reality (VR). You may remember we used to have that ‘Make It A (Virtual) Reality’ column on VRFocus way back when? I dig it out occasionally on VR vs. to discuss a video game, film, television programme, etc that would be a good match with the tech. Well, when it came to making an existing video game franchise in VR, WipEout was one of those at the top of everyone’s lists. It didn’t just ask for a VR adaption, it screamed it, begged for it. It was one of those titles that when you suggested it the answer was ‘well, yeah obviously’. It was a natural fit.

In fact, that’s pretty much the holy grail for WipEout achieved now. Leading me to muse on Twitter the other day that the only thing we’ve pretty much got left to hope for in terms of the title is that they somehow add all the extra stuff from the demo used in the film Hackers. Destructible leader board and all.

Now Wipeout has come to virtual reality thanks to the PSVR support patch, can we have the stuff from Hackers added next? pic.twitter.com/hT2Hbn7zZJ

This in turn got me thinking about the film Hackers as a whole. Mostly that I should probably watch it again very soon as it was one of my favourite films growing up in the 90s. But it then dawned on me that for a movie which was very much of its time, it also at one point incorporated the VR of its time.

Before we start though- yes, Star Trek: The Next Generation onwards. Yes, Lawnmower Man. Yes, VR Troopers. I know. Beyond that, though…

Dade Murphy, alias ‘Zero Cool’, a.k.a ‘Crash Override’ is in a whole load of trouble. He and his hacker friends are being set up to take the fall for a virus which is threatening to capsize five Ellingson Mineral oil tankers unless a ransom fee is paid. The good news is they’re innocent. The bad news is they can’t prove it and the FBI is onto them. The worst news is that the person behind it all is actually another hacker – one hired by the very same Ellingson Mineral to protect their Gibson computer network as the company’s Computer Security Officer. A role played to wondrous effect by Fisher Stevens who is utterly believable as this overgrown kid/corporate sleazeball Eugene Bellford, known by his hacker handle ‘The Plague’.

The technology showcased is, as I say, very much of its time. In terms of ‘wearable tech’ you could for instance include Dade’s use of a – surely utterly useless – head mounted display (HMD), which has more of a Tiger Electronics R-Zone about it (“HERE COMES WOLF!”) than Google Glass.

However, moving away from that, there’s also the moment where Dade’s nemesis takes on VR itself. Indulging in a little R&R, before he is interrupted by FBI Agent Richard Gill, who is, unwittingly working with Bellford to catch Dade and his friends.  It being the 90’s what else would Bellford be using than a Virtuality system?

Someone, actually clipped the scene on YouTube, although judging from the title they didn’t realise just what the system was.

Wait, The X-Files did VR? There’s nothing spooky about that surely. What, are aliens using the black oil combined with DOOM VR, or something?  Well, actually yes. No, not the aliens bit but for one episode The X-Files did indeed tackle the subject of VR.

In the episode First Person Shooter, which takes place in Season 7 of the show’s original run, Agents Mulder and Scully are called in to investigate a futuristic room-scale VR video game with bio-feedback, that The Lone Gunman have been working on as consultants. Why? Well one of the players was just murdered. Not only are they killed within First Person Shooter, they appear to have been killed for real by a character within the title. Except that the female character who shot the player, ‘Maitreya’, isn’t from the shooter and seems to have a degree of self-awareness. 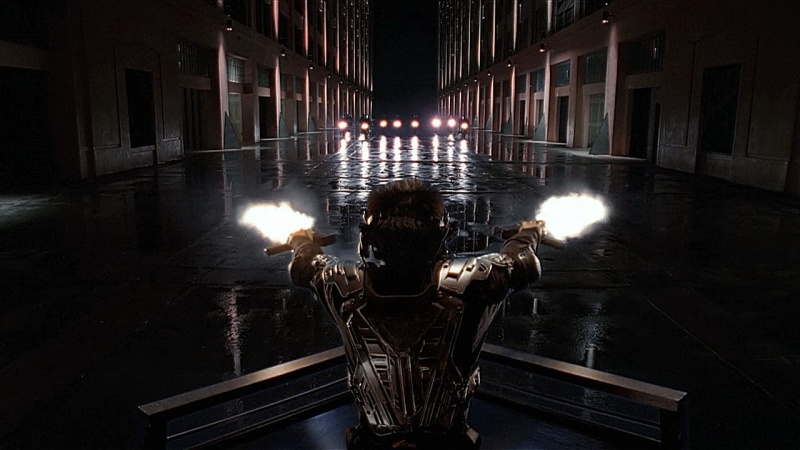 A famous computer hacker/master gamer is soon called upon to deal with the rogue program, but doesn’t fare much better, his efforts to kill Maitreya sees her lop off his hands with a samurai sword for real before she decapitates him for good measure. Oh dear. Soon the Gunmen are trapped in the game after nipping in the to patch it, Mulder dons sunglasses, body armour and an assault rifle and goes into the First Person Shooter to save his friends. Only for FPS to straight up disappear, leaving the Gunmen safely behind, but somehow Mulder has been taken into the video game TRON-style and is now a part of it.

It turns out that the character is a pet project of studio’s developer Phoebe, who poured her efforts into making her as a private project to channel her anger and frustrations at having to work day-after-day with a jerk of a boss in a hyper-male environment.  “I mean, she was all I had to keep me sane. My only way to strike back as a woman. She was my goddess. Everything I can never be.”

Maitreya has taken her programmer’s desire to “strike back” at men a little too literally, managed to break out of the private computer into First Person Shooter and now offing men because she can. Luckily, Dana Scully is here to do her best “I am no man!” moment, and despite previously scoffing at the video game, goes into it herself to save Mulder’s ass.

The video game PAYDAY 2, as you should probably know by this point, does have its own VR mode. As well DOE version that you can enjoy – if you, you know, fly to Dubai.  However, what you might not be aware of is that VR appears within the video game itself too; appearing twice in the guise of the Starbreeze StarVR HMD. This in itself should not really surprise you considering the history of developers OVERKILL and Starbreeze AB.  The first instance comes in the form of a heist mask. Yes, you too can go and rob banks, loot yachts and rig election machines whilst wearing a StarVR. The height of crime fashion!

However, the StarVR does also appear in an actual heist. The title’s 2016 Christmas heist ‘Stealing Xmas’ sees the Payday Gang doing another contract for Ukrainian cocaine dealer Vlad.  Unfortunately, Vlad has a tendency to give endless chances to his drunken brother-in-law; who at this point in the story you’ve already had to deal with at least once. Said relative has, helpfully, stashed some drugs inside boxes at the mall. When the gang find him initially he is dressed as Santa Claus and tied to a chair in front of a Christmas tree. Some creative wake-up techniques on Boozy Saint Nick later, the gang discover that the boxes have actually been distributed to the stores now and so off they rush to locate the lost product. Vlad threatening repercussions if he does not have a happy holiday.

One of the places that cocaine is stashed is in a technology store… and within the locked away box of a StarVR headset. Vlad is less than impressed about the hiding place. 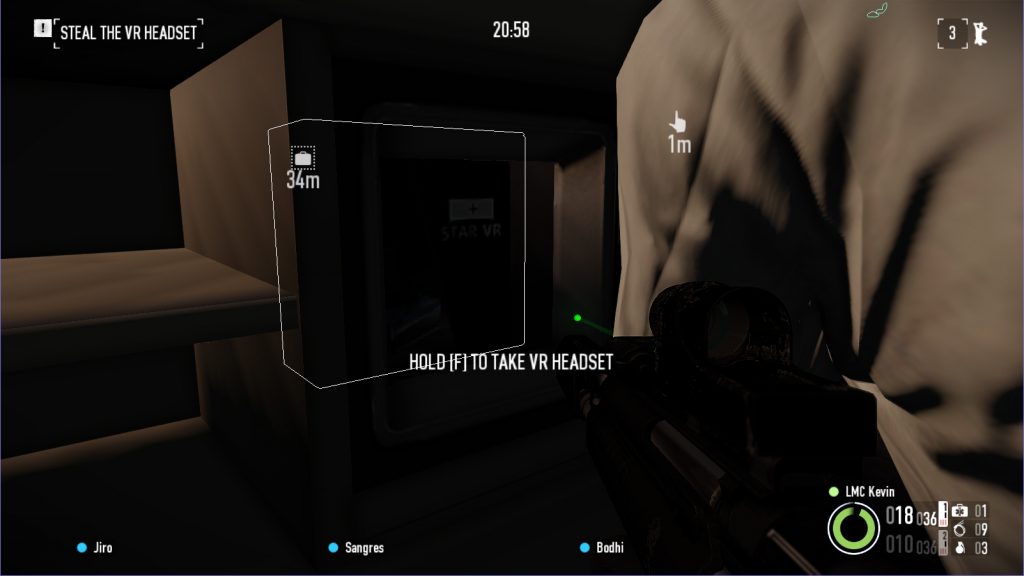 “VR – Vlad’s Rejoicing. That’s what this means to me.” He says, dismissively. “The VR set is virtually not here. Or should that be actually? I don’t know – which is it.”

The whole thing ends with you blowing a hole in the mall roof and disappearing up into the sky by helicopter, riding a Christmas tree with all the cocaine under it that you’ve… reacquired.

That’s all for now, I think a video game, a film and a television show is a good spread for the first episode. VR vs. will be back next week. Maybe with more of this, maybe something else. We’ll have to see.

The Sonic Movie Will Now Be Shooting In Vancouver, Starting July 30th