Home Articles The Tangent: The Lectures of Developers

There are a number of people who write for this site, who read this site, and even those who have nothing to do with this site that dream of being one of the top individuals working on a professional console or PC game. To have the serious chance of your name being bundled with the likes of Shigeru Miyamoto, Will Wright, Richard Garriott, and Keiji Inafune, to pour your soul into a game that may end up being loved by millions. Or despised by greater numbers. You have to sympathize with the people who have worked themselves to near-death to get where they are today and are in that very position, spending years on projects that can collapse in a week past release.

That sympathy only extends so far. As the connection between developers and their fanbase has grown stronger over the past few years, at times an ugly side is revealed. Of course it existed before, leaking through in magazines and marketing, or even in the choices of product distribution. But through the sheer volume of communication that goes on now between these professionals and their potential target market, sometimes the casual side of the developer becomes the unprofessional side. Allow me to expand on this.

Denis Dyack has had a very visible presence on the online gaming community NeoGAF. He, like a number of other game developers that post there, often tries to relate a real perspective on his feelings, on the work on his products, and on the gaming industry as a whole, most famously describing a need for a one-console future. But as opinions of his latest work Too Human have soured from poor press showings, a questionable demo, and reviews pointing out flaws with the cameras, class system, and respawning, Mr. Dyack’s tone changed to become bitter, defensive, even malicious. After attempting to rally his game’s fanbase on the forum, he later described the act in an interview as a sort of rebellion against what he “would say is probably the worst forum.” He was supposedly making an attempt at some grand point, about his game and himself versus the complaints of the NeoGAF community. Yet even in this light, you have to wonder why he turned to launching veiled threats against the forum if it was truly something he planned out to the degree he suggested. Eventually the forum administration decided that there was no point to the continuing drama, and in a hard-hitting summary post, banned Denis Dyack from NeoGAF. It sounds so mundane and unimportant to it state that way, but this was a professional game developer heading up a multi-million dollar production being banned from a major internet forum for his behaviour and threats. This is something not even David Jaffe has accomplished. Denis had to work for this.

Could he be right about some of the critiques leveled against his product? Of course he could be. People too often hate blindly on the internet with little regard for the need for proof, leeway, or even time to accept new or different things. As a generality, gaming fans are prone to snap judgments and knee-jerk reactions, and ridiculously high expectations. But what about when the reasons behind those decisions are unknown by most of the public? Some of the choices faced by developers are those that will never be described in a public manner by legal contract. Others require a detailed knowledge of the product and its limitations of technology, budget, and marketing. The public is not always aware, or even informed, of this information. So should it result in a negative reaction by professionals when the consumers state their opinions with the information and understanding they have?

Here’s an example of something I feel was handled well. When the original, planet-shaking reveal of Diablo III occured, many fans objected to the overall graphic design of the areas shown. They felt that it didn’t reflect the atmosphere of the previous Diablo games as well as it should, the designers opting for a more colorful, predictable fantasy color scheme. Rather than berate those people, Diablo designer Jay Wilson examined some of the more popular fan mockups, and explained why they wouldn’t work. He described limitations with the lighting, the necessity to create strong visible profiles for 3D figures, and the basic need for color balance. Another interview described their internal debates over the issues brought up, further cementing their reasoning in a clear, unpatronising manner. Excellent work, unfortunately damaged when one of the gaming press decided to play the popular game of “Chide the Fanboys.” Now, despite the character he often plays on his show, X-Play’s Adam Sessler is a very intelligent, respected games journalist who usually has a good understanding of what’s going on. So it was a disappointment to watch his weekly segment, Sessler’s Soapbox, and hear him berate people for questioning the changes. He carries on about the insignificance of those who question the art style, mocking them, and finally suggesting that they do something wonderful for society as a whole and let the game they’ve been looking forward to for almost a decade slide by no matter their objection, because they just don’t matter. I really don’t understand how disagreeing with the art style of a game you’re looking forward to for entertainment is in any way equivalent to the effort required to effect a social change or advancement. It’s almost the equivalent to saying, “You don’t like your meal? Then go read a book!” It’s nonsensical. No one putting their energy into complaining on internet forums about a game is going to divert that energy to campaigning door-to-door for a political candidate, or working in a soup kitchen for the homeless. The active discussion and debate is part of the enjoyment of most hobbyists, gamers are not unique in this matter, so the comment comes off as simply odd.

He also questions the amount of content we’ve seen of the game so far. In actuality, twenty minutes is a lot of time for such an early showing, and Blizzard knew this game was a reveal of titanic proportions. They chose a vertical slice of gameplay in a set number of locations that would serve as a referential standard for the game. Those areas were chosen to represent Diablo III at this time. That was their decision to make, and as gamers exposed to only that which is officially released in most circumstances, of course we can only judge and discuss what we are shown, and presume what is shown to be representative of a majority of the product. And ultimately, fans do have a right to question why a product in a series they’ve devoted their time and money to doesn’t seem to agree with the previous products in the series. The argument by fans is that Diablo has an iconic look, and what’s been revealed of Diablo III doesn’t fit the established aesthetic of the existing Diablo universe. And yes, gameplay is king, that answer comes naturally. But too many people have been brainwashed into blurting out the mantra that visuals don’t matter at all. Of course they matter, of course they contribute to our enjoyment. These are video games, and these are the very graphics people are expecting to stare at for tens, or even hundreds of hours. They may have already done so in the Diablo games prior, and naturally have a certain expectation of what the third instalment’s look should be. Berating them for disagreeing with artistic decisions is distasteful, and mocking them for not understanding or realizing the technical reasons is unfair. And when people say those who complain should vote with their wallets, they’re completely missing the point. These people want to buy Diablo III, and will probably do so no matter the art style. But Diablo III is a special occurrence, a sequel eight years in the making and still a long, long way from release. These fans are hoping in their own way to help the developers make the product even better. In the end the fans and developers are both on the same side. 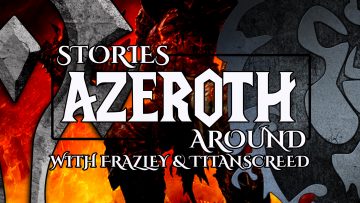 Kevin
691
NiGHTS is back - but so is Wizeman the Wicked.