VR vs. MR vs. Uncle Jack

Hello again and welcome back to VR vs. the time once a week where a keyboard is thrust into my hands and I jab away at it until I make some kind of point. Today is actually the last VR vs. for a couple of weeks as I am off on holiday to relax. So if there is a VR vs. next week it certainly won’t be written by me. One of the things I wanted to do for a while is get back to talking about games and away from the super serious discussions regarding the industry for a bit. We went through a bit of a period of talking about very serious industry things and I think we’re due an excited tête-à-tête about a game I’d like to see make the jump into the world of immersive technology.

I was also not going to write a column about Palmer Luckey cosplaying as Quiet, because dear God why did every website out there do a story about that? Who cares! He can dress up as whoever he likes! People cosplay. This should not be a shock to the games industry at this point. Besides, I’m sorry he’s not topping Jamie Lee Curtis secretly cosplaying as Vega.

Long time readers of VRFocus will of course remember we used to do that on a regular basis courtesy of our Make It A (Virtual) Reality feature, something I actually used to write moderately frequently before taking over VR vs. Unfortunately in February last year someone made the decision to take Make It behind the VRFocus barn and proverbially Old Yeller it with an editorial shotgun. Which was a shame, because damn it I liked Make It A (Virtual) Reality. I got to talk excitedly about TRON, re-imagined classic video games and board games, and discussed children’s television and Bruce frickin’ Campbell. So today I want to get back to that, and since this is my column I hereby resurrect Make It so I can talk about a game that whilst I have not played (and am not going to until it is finally released) that I love to watch others play and think would make a highly interesting mixed reality (MR) – not VR – experience. So I guess we’ve got a VR vs. Make It A (Virtual & Augmented) Reality? Oh well.

As an aside before we begin I am aware that it is #MentalHealthAwarenessWeek (in the UK at least) and I will throughout this be talking about a game where people are en masse using medication to escape their troubles. There is no deliberate timing for this, it is nothing to do with the campaign in any way. Nor am I directly equating We Happy Few with the topic. Mental Health is a serious concern; many people do struggle getting through life from day to day in oh so many ways. Depression is a proper son-of-a-bitch, as this writer oh so readily knows. We will actually be having a three-part mini-series on emotion and how VR can help tackle such things beginning tomorrow. So keep an eye out for that. I can however see why someone might, might think the timing is deliberate or I am being critical in some way. I’m not, this has nothing to do with it. I just really want to talk about this game today. 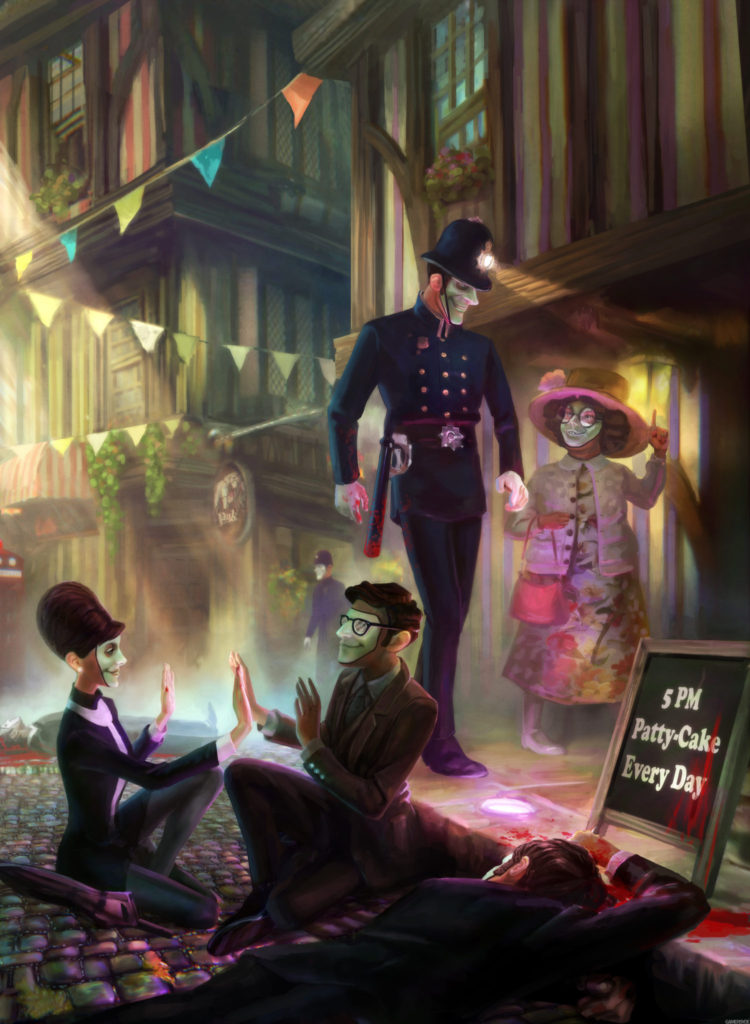 In any case… Wakey Wakey, everyone! It’s another fabulous day on VRFocus. The sky is gray outside although I am sure that we will soon be spotting streaks of lovely sunshine poking their way through the clouds. Everyone at VRFocus is working busily away on news and features and doing absolutely everything that they can to bring you information on virtual reality (VR) – the brand new technology that can bring you joy. You can never have enough Joy can you? Happiness is a choice!

We Happy Few first poked its head out of independent studio Compulsion Games in 2015. although I didn’t hear much about it until it featured in during XBox’s E3 presser in 2016. Then, ohhh, then it got my attention. We Happy Few is set predominantly in Wellington Wells, a series of islands in the UK surrounded by a river. Quite possibly near Blenheim in Oxfordshire. That’s based on that there is a Blenheim Bridge and the lead character making references to “Mr. Churchill” whilst talking to himself in the area.

Kevin’s Historical Explanation: Blenheim Palace was the birthplace and ancestral home of Britain’s great wartime leader Sir Winston Churchill. After he died he was buried so that you can see Blenheim Palace from where he rests. So it’s a pretty good theory.

Kevin’s Televisual Tip: If you get the chance watch the documentary series Churchill’s Bodyguard. It’s fascinating.

Speaking of World War Two, We Happy Few is set in a dystopian past – not future – where following World War Two it seems the populous has decided the only way to get through and make sure such a tragedy never happens again is to medicate their way through it. Utilising an artificial high known as Joy, readily available in pill form on every street corner phone booth – even in multiple ‘flavours’ – they steadfastly ignore all the terrible things going on around them. The lack of food, the utter misery of lives spent in drudgery. Choosing instead to live in delusion. “When life annoys, pop a Joy.”

Everybody must feel the same happiness. Everyone must go around with a big smile on their face. (The same painted faces are another sign of the need for everyone to be the same.) It’s like a bit like the film Equilibrium set in a twisted version of the 1960’s. Joy’s forced happiness versus Equilibrium‘s all emotion stripping Prozium. Instead of the mysterious pseudo-religious character of Father and his conformist broadcasts there is Uncle Jack. A happy-go-lucky and slightly enigmatic figure ripped straight out of 1950’s early television broadcasts. A continuity announcer, in more ways than one, he is there to reinforce the message of those above and his cheery attitude and stories keep everyone going through troubling times. The people’s dependency is such that he has reached a near religious status for some. The more you look, the more you wonder if his words aren’t slightly tinged with a touch of menace. Shades of the BioShock series permeate the story, surroundings and game play. The Equilibrium comparison also amplifies even more as the lead character Arthur Hastings’ job is to ‘redact’ materials that may induce an unsatisfactory emotional response. Do your job. Smile. Join in. Be the same. Play Simon Says and learn to do as we say. Be happy. I said BE HAPPY.

Swinging these sixties are are not.

For those who don’t take their Joy their behaviour soon has them found out, and those who are not on their Joy and are not conforming are called Downers. The presence of Downers are a threat to the happiness of the conformists. There are anti-Downer security devices and traps placed in the more opulent residences in order to protect them. Traditional looking British ‘Bobbies’ roam the streets and are quick to judge and secret enforcers work behind the scenes. If discovered it becomes an essential free for all on the Downer, they are caught and sent packing to Wellington Wells where other Downers are – that’s if they don’t die of course. Death is everywhere. But the shock of death can be overcome and ignored of course. There’s a pill in your pocket to put a song in your heart.

For Arthur, a reminder of his lost brother sets off his story as he refuses to take his Joy as the memories set in. The scene shifts and everything begins to look decidedly wrong. He is eventually discovered when the work party he is encouraged to attend includes a brightly painted pinata and after whacking it he looks again to see what they all see as a pinata is actually a dead rat. 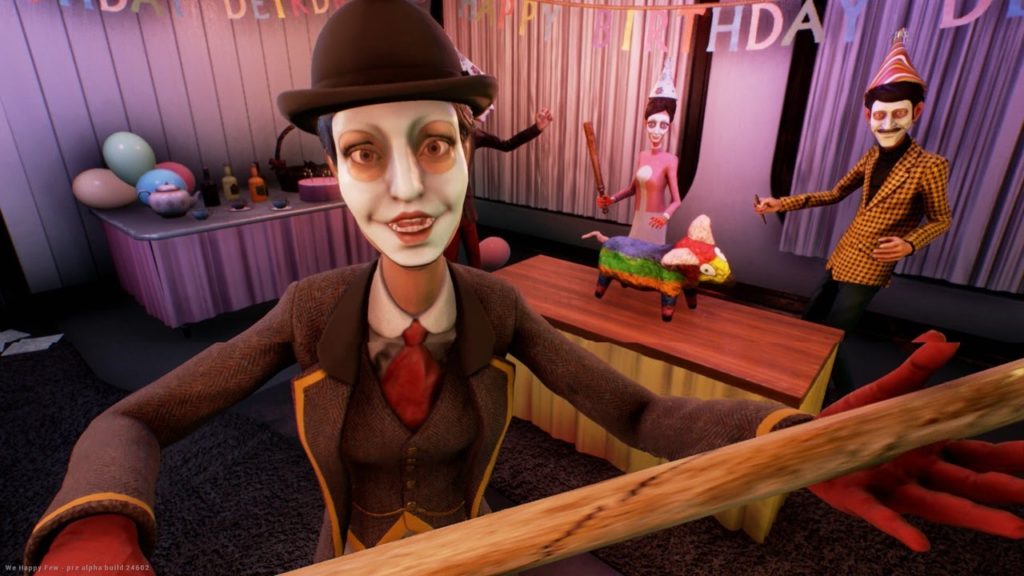 However this visual transformation between the real world, the ‘ideal’ world of Joy, and also the visualisation when crashing off of Joy is what would make the most interesting augmented or mixed reality experience. Imagine you interacting with the real world around you and find that it is changing? What if you saw everyone with a painted smile on their face? It’s not that far away from what you’ve got on the likes of Snapchat right now, is it? We’ve had VR experiences where the world around you shifts based on your emotional responses. Remember the twisting virtual world of Nevermind?

We Happy Few does I think have the potential to produce an experience in a similar vein. Villagers judge you based on your movement and attitude both of which have the potential to be tracked. Imagine travelling through a location which can change from sunshine and rainbows, to misery, menace and monotone hues. About not just playing a game with a controller but playing the game. Moving through in a certain way physically, having to worry about the sheer vibe you’re putting off. Desperately trying to play a character in a world where you haven’t seen the script. In many ways it’d be a stealth game but a stealth game in plain sight. An MR conform-em-up.

We Happy Few is still very much in progress, the team put out a big update not that long ago adding another island. If you would like to see the game played I suggest definitely you watch ChristopherOdd’s let’s plays where he covered both the 2016 version and the recent Maidenholm update. Incidentally I also recommend following his playthroughs of XCOM 2. (Locksley forever!) We Happy Few is also set to get a film at some point so we’ll see more of Uncle Jack yet.

But wouldn’t you all like to welcome Wellington Wells into your home – your actual home- via MR? Ha ha ha… of course you would.

You don’t want to be a Downer do you?