When Archiact announced their next virtual reality (VR) project back in October 2017 you would have been forgiven for responding with a knowing nod and a slight roll of the eyes. “With Evasion, the team is using everything we’ve learned and weaving our experience into a truly genre­-defining AAA title.” Said the press release at the time. “With innovative locomotive movement and intense bullet hell gameplay, we’re convinced Evasion will prove a stand­out VR experience and we can’t wait gamers to play for themselves.” It’s a nice statement that says all the right things for announcing a first person shooter video game. But come on. We’ve been here before, right? 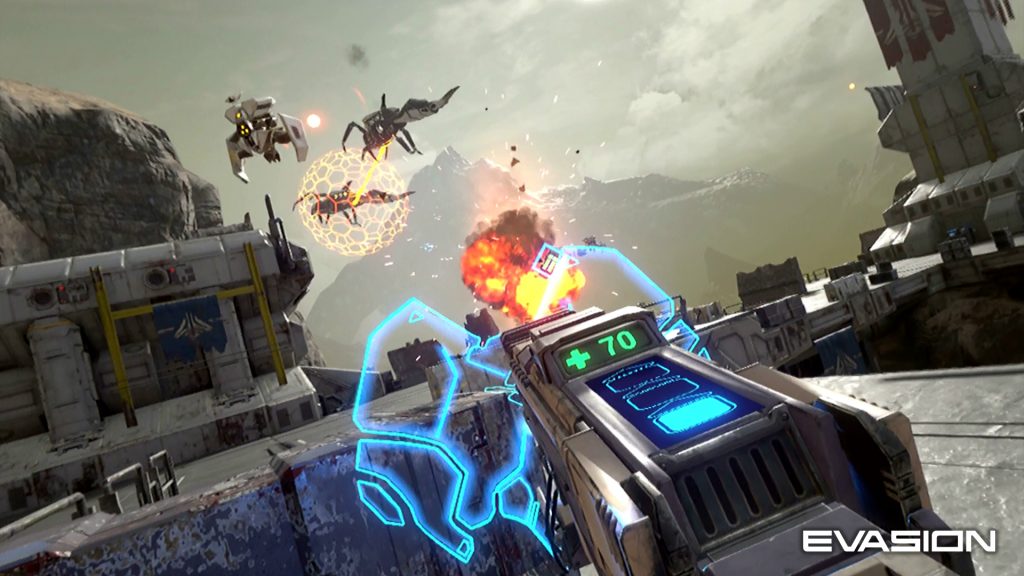 So, it was a pleasant surprise indeed for VRFocus when we got a chance to preview the title on the HTC Vive Pro headset at this year’s Game Developers Conference (GDC) and found that not only does Evasion’s alien landscape look amazing in VR but the gameplay was pretty impressive as well. Archiact seemed to not just be saying all the right things they were doing all the right things too. As Peter put it in his Evasion preview last month “it looked so crisp and vivid that it’s was easy to forget this demo was being held in GDC” and the developer clearly wanted the title to be as welcoming as possible, Evasion being stuffed “with just about every conceivable locomotion option available”.

In fact, it became pretty obviously when we spoke to Archiact at the time, that they were having an absolute blast making the title. The team even produced for us a pretty definitive guest article on the development of the enemies of Evasion, that you can tell when reading it, that they had to reign themselves in a bit. As they could of quite happily continued to tell you stuff about the title for as long as you wanted to hear about it.

All this is excellent news indeed for PlayStation VR owners who it has been announced today will be joining HTC Vive and Oculus Rift owners on PC in getting to experience the intensity of the sci-fi bullet-hell shooter when it comes out later this year.  The release date is currently slated as being Fall 2018.

“Evasion invites you to jump in solo or team up to save an embattled human colony from swarms of invading Optera. PlayStation VR gamers will experience a campaign filled with intense action and AAA-graphics powered by Unreal Engine 4. Built for locomotion and featuring four unique playable classes, Evasion is the authentic FPS experience VR fans have been waiting for!” Explains Archiact in their announcement. “Use your Tether Lash to snatch enemies out of the air and hurl them against buildings, snipe at targets from behind cover, or charge up your blaster and unleash a unique, class-specific Surge Attack. Evasion offers a myriad of ways to take down the Optera swarms.”

The title contains both solo campaign and two-player co-operative gameplay, a replayable survival mode full body avatar animations by IKinema, and – PSVR owners will be delighted to hear – will include support the PlayStation AIM Controller right out of the gate.