SEGA have always been keen to get to grips with any new technology straight away, this tends to result in launch or near launch titles involving Sonic. As a result you get a two-edged sword as a company and as a fan, in that you are first in with a very popular franchise on a new platform, providing something familiar to a new audience and should the hardware sell like hotcakes your game is right there in amongst the best sellers. The other side of this is that the development cycle is very trunkated, there’s a short space of time to make the game and Designers and Directors may not be aware of the full range of said hardware functions – or any inadvertant limits. Or your game ends up being crap.

This brings us to Sonic Free Riders, a game with a very short development cycle indeed. A continuation of the Sonic Riders spin-off series, with Sonic and chums facing off with Jet The Hawk and the Babylon Rogues to prove who has the biggest pair of anthropomorphic balls in Back To The Future Part 2-esque hoverbaord action. Is it even possible for a review about Sonic Riders to not mention BTTF? Evidently not… It is a series which depending on who you are talking to is either highly enjoyable or tremendously boring, however it is absolutely ideal for the motion-tracking of the Kinect. Or at least it should be.

Now many of the sites out there have had reviewers who have struggled with the game and not got the full picture as a result, Sonic Wrecks has actively sought out one of our staff who can play the game. We leave you with Andy’s opinions.

In the past there have been many Sonic games that have made all of us go “WOW!!!!” From the first game in this speedy hedgehog franchise back in 1991 to his first ever true adventure in 3D, on to his recent 2D platforming return and colourful outer space offering. There is though a new way to play with Sonic & Co and all you need mainly is just you, yourself and no one else……..unless you’re playing two player then on the other hand, just you and a couple of friends.

Sonic Free Riders came out as the third title of the 2010 gluttony of hedgehog launches which included two titles mentioned above, Sonic The Hedgehog 4 Episode I and Sonic Colours.  Free Riders is a fast pace racing game which puts you in control of Sonic and his friends but with no controller no, no, no, no you control them with your body. Free Riders is the first ever Sonic game to be made compatible with the Xbox Kinect and it does work pretty well – but only conditionally, there are some little drawbacks whilst playing it too.

First up the story, the Ex-World Grand Prix which featured in the first Sonic Riders game is back again to let racers from around the world participate so they can try and become the next Extreme Gear Champion. The main organiser behind the championships is a somewhat mysterious royal called “King Doc”; you won’t win any prizes for guessing this is Dr. Eggman. This is mainly because a) he looks like Dr. Eggman, b) his name has “Doc” in it and c) DR.EGGMAN ORGANISED THE TOURNAMENT LAST TIME.

Before you begin you must choose which team to play first through in World Grand Prix Mode.  Unlike previous Riders games the story is split four ways with a setup more akin to Sonic Heroes although intiially you must just choose between either the rechristened team of Sonic, Tails & Knuckles “Team Heroes” – Knuckles clearly was doing politicking to get the name changed. Or Team Babylon: Jet, Wave & Storm. After you complete both Heroes and Babylon stories, youwill then unlock Team Dark (Shadow, Rouge & E-10000B) and Team Rose (Amy, Cream & Vector). Each team has a different reason why they want to win the Ex-World Championships; Team Heroes enter not for the sake of treasure but to go out and have fun, Team Babylon enter as cocky as ever and apart from the big cash prize on their minds, Jet is determined to face Sonic in the finals and beat him once and for all.

Incidentally there has been an interesting development with Jet’s character over the years. For those that aren’t aware, Jet remains one of the few characters to have actually BEATEN Sonic. Something he did in the first Sonic Riders, winning the final race of the Ex-World Championships.  He did this however through cheating and by an explosive charge on Sonic’s Gear, since when he has been obsessed about whether or not he could have really beaten Sonic fairly. Whilst Jet is one of those characters who operates in shades of gray – he IS a thief after all – its interesting that he’s a rival who’s not quite villain and who has something akin to a code of honour.

Fun Fact for you as well, the overall winner of Sonic Riders is actually Dr. Eggman and remains the only game where he actually wins.  Sadly the treasure he gains is useless.

Team Dark arrive for the tournament 15 minutes late but naturally couldn’t care less about the time as their main focus is to win the treasure and then just go home. Unfortunately after realising they needed another team member otherwise they would be disqualified and with E-123 Omega apparently off having an oil change or something, they find a lonely little E-10000B robot and decide to let him join the team.

Lastly Team Rose, who also arrives late for the tournament –  yes they have actually give a storyline reason why you can’t pick either of these teams at first. They do make it in time for the start of their first race with Amy still trying to get Sonic’s attention. Cream is out to go and have fun whilst Vector is in the team after being hired from the Chaotix by Amy to the team’s muscle with Big The Cat apparently off fishing… or something. Naturally all the cash strapped crocodile cares about is the cash prize.

After completion of all four stories you then unlock the final story, where there are a couple of big surprises which you probably know by now. But for now i’ll let you all find out what happens for yourselves.

The gameplay to Sonic Free Riders on the Kinect is very impressive, while using full body motion control there are many things you can do whilst you are in game. Such as; Holding your arms out either to the left or right to grab rings or poles to take you to different parts of the race course, liftng up your arms so you can be able to grab on to different transition obstacles (poles, rings, trains etc) to take you to different parts or short cuts in the course. You can even collect pickups in this way, with some comically over the top weapons and others there to help you proceed in the race.

There are several different game modes in Free Riders (apart from World Grand Prix Mode) to choose from so you don’t get bored, such as:

The online multiplayer mode is mainly a basic race mode for up to 12 players in one lobby, after selecting your character and after the lobby host has chosen the course; you are then ready to race. Although the only little problem to the online mode is mainly the connecting time as it does take quite a while for the race to even start but when everyone is all connected and ready to go, then you are all set. There is really nothing bad to say about the online mode, I found it not to lag at all, running very smoothly, and it is great fun to be up against players from around the world that are of course doing the same silly things you are doing.

The controlling is quite basic and straightforward; you must always stand in the position as if you are riding a skate/snowboard, to turn left or right you move your body to the left/right, whilst in a race you will always reach jump ramps, in order to get past them you must jump over them, by crouching down your character will start to crouch down as well into a as I like to call it (get ready to pull an awesome trick mode), once you are on the ramp you are then ready to, well jump. If you get the timing just right your character will perform a fantastic trick which could get you an X Rank so the better you time your jump, the better trick you do and the better Rank you get. Another move you can do whilst playing against a friend is you can team up with each other, in order to do that you must turn to look at each other, put your hands together with your friends hands (tell them they have beautiful eyes….only kidding), and away you go, everything you do is the same except, you are working together.

As well as this sounds there are, as I’ve said, some little drawbacks to it. Mostly it is when you’re in game, sometimes when you’re just playing and minding your own business, the pause screen pops up out of nowhere and this can happen a good few times (mainly this can be caused if you are moving your hands in a certain way it will think you are trying to pause) which can be a bit frustrating at times when your continuously shouting select at the Kinect when it is on the cancel button in the pause screen.

Another issue is that sometimes when you want to do something (i.e. jump, collect rings, hold onto obstacles etc) and when you try and do the motion, the Kinect and the game can sometimes not respond to your movement which can be a bit of a pain in the backside as it is things like this which can sometimes spoil your chances of winning a race. However, apart from those things this is very a fun and entertaining game and is very good with the Kinect and can be fun for everyone, family, friends, young and ol…. er, active middle aged people.

S.W.A.G Returns – The Original Sonic Generator Is Back Online 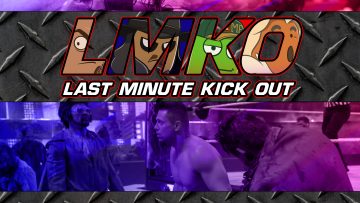 Kevin
796
The dead are on the march again and there's a new king in town. That town being Hell.