Yep. It is definitely that time of the year.

We now have two voice actors that have listed unknown Sonic projects on their resume or website. This time it is Rouge voice actor Karen Strassman, who did the former. You can see the listing in the image provided below: 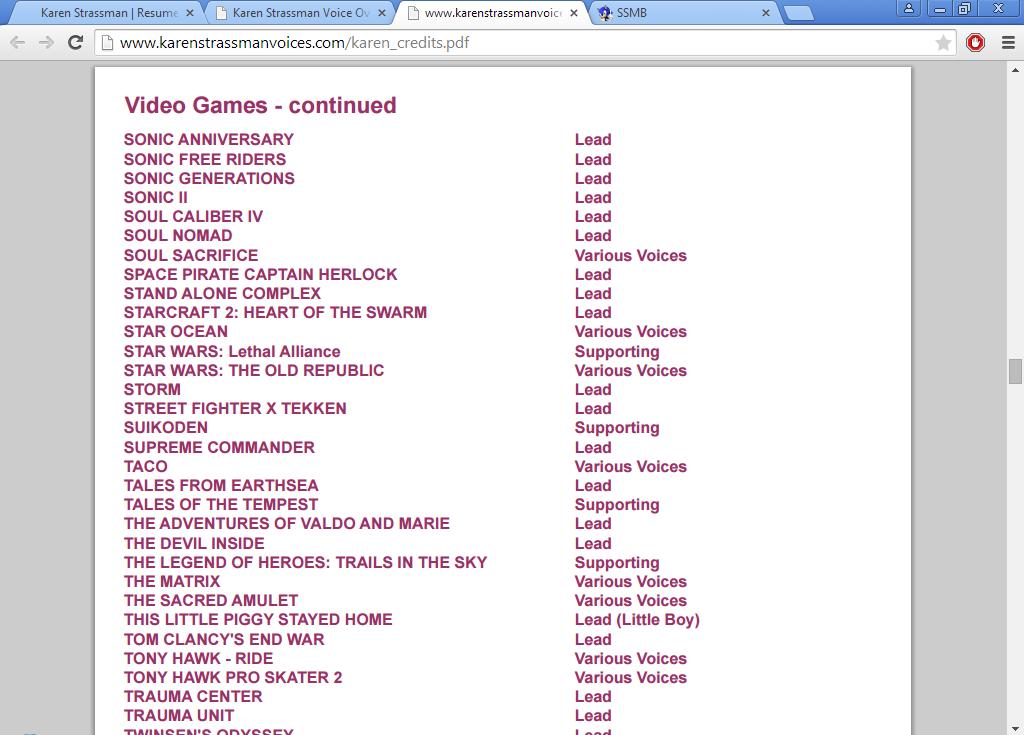 There are two listings seen: “Sonic II”, similar to the “Sonic Mach 2” rumored listing from before, and “Sonic Anniversary”. What is noteworthy about the latter is that this is not the first time we have heard this. “Sonic Anniversary” was the code name for Sonic Generations. However both are listed separately, perhaps a suggestion to being reused. Could this be a Sonic 25th birthday title? Either way this is not official word nor is it confirmation. As such it is being labelled as rumor for now.

Still, this may be even more interesting than the Sonic Mach 2 rumor. We’ll let you know more as things develop.

UPDATE: We have more to share on the resume. It was discovered on the SSMB that a version of the resume, dated back from January 22nd, 2012, is still available. Both listings are still on there, indicating that both listings have been potentially in the works for at least two years now (the version found by Stadium is from May 20th, 2014). We’ll keep you updated.

UPDATE 2: The SSMB’s investigating continues. Thanks to the Wayback Machine it was discovered that a March 22nd, 2012 version does not contain either listing. However the listing reappears on a version dated September 5th of that same year. The speculation is now shifting from “Sonic II” being an upcoming game to the listing being a code name from a Sonic game that was either cancelled or already released. As always we’ll let you know on further developments.