Get ready to dust off those driving gloves, SEGA and SUMO Digital are getting set to drive you wild once again it seems – and this time it’s not going to be just on land.

Taking something of a cue from Diddy Kong Racing (yeah, get used to hearing that line), the action will see Sonic and chums vehicles get an upgrade allowing them to transform from land craft, to water craft and to aircraft for this new game due this year on PS3, 360, Nintendo 3DS and PlayStation Vita. The legal line does also mention Kinect however.

The new trailer for Sonic & All-Stars Racing Transformed (they’ve dropped the SEGA apparently…) confirms Sonic, Eggman, Knuckles, Amy, Beat, BD. Joe and Tails all returning although the fox’s ride is most changed with his new land ride which has clearly a reference  from his ride from Sonic Drift (I seem to recall someone suggesting that a long time ago…*COUGH*). Knuckles’ quad bike seems to have been replaced by a possible reverse trike whilst Beat swaps his pimp mobile to something more similar to what the echidna used to possess.

Additionally a mysterious additional character driving a rather classic looking car and camoflage sided boat that can be seen in the trailer – wait a minute. HOLY CRAP! Is that VYSE from SKIES OF ARCADIA (and Valkyria Chronicles)?!?! IT IS! 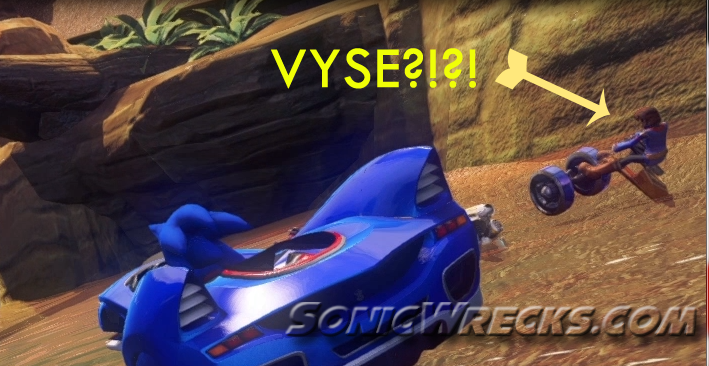 IGN also reports Gillius Thunderhead as a driver and Panzer Dragoon as a level area.

The action is as frantic as before, with item boxes returning, as well as new star markers which presumably will be the new way you charge up your All-Star Move – its not clear from the initial trailer if the move it locked to a particular mode or if you will indeed possess three of them at this time.

Richard Jacques is also confirmed to be returning to work on the franchise, remixing the music in a fresh new way.

The official press release is below:

Following on from the huge success of Sonic & SEGA All-Star’s Racing™, the characters now have their own unique transforming vehicles designed to take advantage of the varying terrain. The line up on the Sonic & All-Stars Racing Transformed grid sees SEGA favourites – including Sonic the Hedgehog, Dr Eggman and AiAi – return to battle against newcomers that include Gilius Thunderhead of Golden Axe and Vyse of Skies of Arcadia. The brand new dynamic environments and tracks in Sonic & All-Stars Racing Transformed are once again inspired by SEGA’s illustrious gaming history. When the road falls away beneath you in Super Monkey Ball’s Temple Trouble track your car transforms into a boat and speeds down the rivers and rapids, whilst the Panzer Dragoon inspired track, Dragon Canyon, takes you into the sky in complete control of your plane, barrel rolling to out-manoeuvre rivals and obstacles before transforming back in to a car and racing to the finish line.

“Given the fantastic feedback we received from critics and consumers alike for the first game we really wanted to push the boundaries on our follow up game, Sonic & All-Stars Racing Transformed” commented David Corless, Global Sonic Brand Director. “Transforming vehicles allow us to do this – as well as drifting your car around the corners of a track, you get to fly your plane and pilot your boat against others all within one race. Add to this a grid full of star characters, retro IP, fun, fast race modes and cool tracks and racing fans of all ages are sure to love this one!”

Sonic & All-Stars Racing Transformed also sees the popular All-Star moves return with a brand new mechanic allowing your All-Star bar to power up faster if you race daringly and stylishly. An all new fair weapon system ensures that weapons fired at your vehicle can either be blocked or evaded once you have gained the skills to do so, making each race a unique and exhilarating experience whether it’s on water, in the air or on land. Old rivalries can be settled and new track records set in the enhanced online multiplayer mode, whilst the Grand Prix mode and competitive Battle Arenas will prove that Sonic & All-Stars Racing Transformed is certainly set to change the rules of the race.