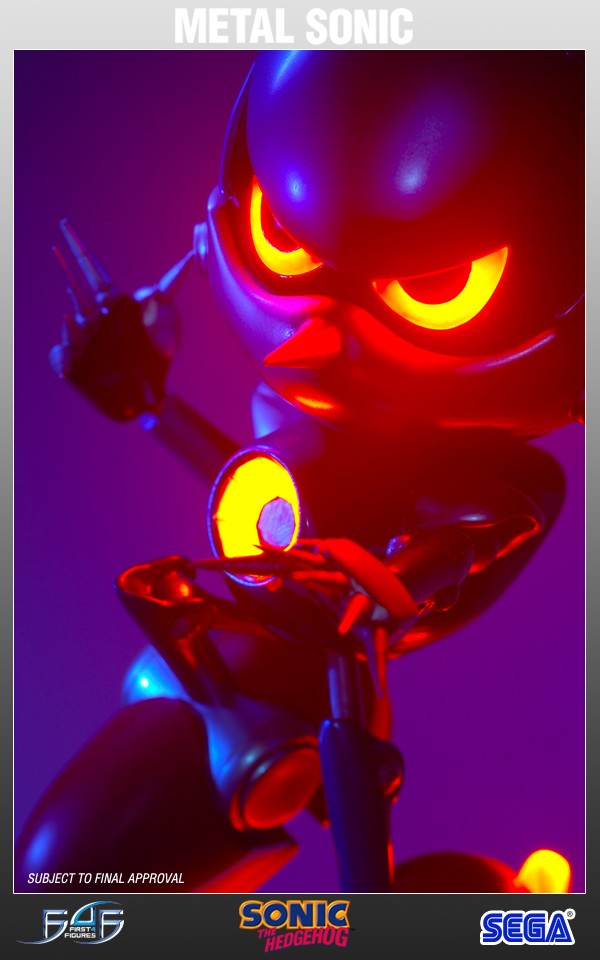 Back in the day before Summer of Sonic 2010 I spoke to one of the owners of First 4 Figures about what they could do at SOS 10.

At the time they talked me through their upcoming products (can’t tell you about those, hush hush y’know) and they immediately became everybody’s friend by offering attendees a 3″ Metal Sonic figure for free from their series 2 line – which wasn’t even released yet.

At the time I actually suggested Classic Amy, why? Because in fairness to F4F you lot were more likely to actually go and buy Metal Sonic, so it made sense to perhaps give you the one of the set you wouldn’t and would have less success in locating!

F4F would have none of it though and were dead set on giving you Metal Sonic because, in their own words, Metal was “a fantastically cool character”.

You can’t really argue about that really, especially when its coming from a man called John Connnnahhh. I mean the man fought Skynet for Tikal’s sake(!)

It shouldn’t really be a surprise then that F4F have taken their love of Metal Sonic (and I suspect your enthusiasm over him at SOS) to form a new statue of the Sonic’s robot doppelganger in the same style as the large limited edition Super Sonic that again was shown off to the public for the first time in the UK at Summer Of Sonic 2010. This third statue in their vinyl resin line is once again available in standard and limited editions, the latter of which will light up and pre-orders for the highly limited 350 piece line plus standard version are already being taken.

for them to get things ordered and through before the US one runs out for now at least the item is only available in America and Canada. Naturally we’ll keep you abreast of whether of not F4F are successful in this extension.  I hope they are, they’re good chaps at F4F.

Besides, I gave them all sorts of ideas for a potential 3″ series three amongst other things that I KNOW you’d like and they were quite interested in it so its in our interest for them to stick around!

The NiGHTS Winter Dreamers EP Gets An Upgrade