Everyone and their mother are doing reviews of 2010 now we’re in 2011 – Happy New Year by the way – a year one would hope, of great progress with the site now taking a more dynamic direction I wondered what our successful YouTube account has been up to. After all its getting very popular indeed now, so baring in mind we kind of know what number one will be, what in a year of Sonic Colours and Sonic 4 AND Sonic Free Riders AND more besides what was the top ten 2010 SW videos in terms of hits? Lets find out!

The first time we heard Reach For The Stars, Gameplay Trailer 1 is a massive success on the SEGA Europe YouTube account where its in the top 5 all time videos for views going up against and beating videos with almost two years head start. Something was clearly done right with this video.

Something rather off the wall, especially with Unleashed being almost 18 months old at the time but the release of a trailer for DLC on LittleBigPlanet of all things took ninth spot.

A Sonic 06 vid gets in the top ten!? Well yes, sadly its not my favourite clip (you know the one) but 5.9K zoomed over to watch notorious video “Elise’s Tears”. Why? Well its the video where Sonic actually bites the bullet… or gets shanked in the back by a massive lance of light. You know, whatever.

The second Gameplay trailer showed off the DRILL and LAZER Wisp moves, some of the opening CG and also more footage from Sweet Mountain.

Colours’ strong showing (errrr, has Sonic 4 vanished or something?) continues with the very first trailer showing off Sonic, the Wisps and Tails… who then got everyone excited as you thought you could play as him. Yes, sorry about that.

The countdown video from SOS10 generated a lot of interest, physically put together by the Sonic Show but conceived and all the actual numbers crated by us at SW it got SOS 10 off to a roaring start… with an in-joke at Sonic 06’s expense.

Over seventeen thousand people viewed the DS trailer for Colours, which also showed off the exclusive BURST and VOID Wisps. 17,000 for what was essentially the seventh trailer – and one just for DS is actually pretty impressive.

In this trailer we had the underwater level, footage from Asteroid Coaster, the co-op section (Sonic Simulator) and Motobugs everywhere! People loved this video as besides the Motobugs there were lots of little freeze frame details. It takes its place as the highest ranked official trailer to go on the SW Channel this year.

It would make sense considering the 2009 Tails Doll skit is at 188,000 hits that BoozermaN’s 2010 Tails Doll short for SOS would also make big waves. Though not as big as those in Marine’s bathtub apparently.

Well we kind of knew it was going to be this one, the first time we ever heard (properly) Roger Craig Smith as Sonic was an event and a three-way exclusive for the community sites. Whether you liked the voice, thought it needed to grow on you, hated the voice or were outraged the three of us had the video, you cannot deny its impact or importance. It got a whopping total of over 300,000 hits and is the second highest video in terms of hits on the SW Channel. Most official trailers don’t get over 60,000!

Wow, it seems the SW crowd just wasn’t as interested in Sonic 4 vids – I wonder if that was to do with its audience or them constantly being gibven as exclusives to ON THA SPAAAAAGGGHHHT. To carry on though the highest rated Sonic 4 video was Gameplay Trailer 1 but that was at #18, in comparison the highest Free Riders video would have been the first western trailer at #12 – heck even the Japanese “COOOOL!” trailer ranks higher!

Who’d have thunk it. 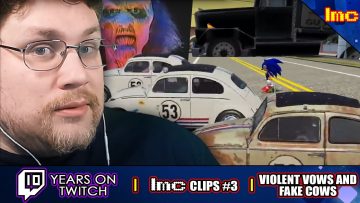