More often than not, creativity first stems from modification. Take an idea, put your own spin or tweak on it, and you’ve got something a little different. As you develop new skills to advance your ideas that much further, sometimes you feel the constraints of your source materials holding you back, particularly when they take a sharp deviation from your own ideals. Others point out that you’re piggybacking off the original work of another, and that with a fresh coat of paint and a few small changes, you would have something unique enough to call your own. And so, it’s time to move on to original development.

That’s the traditional fan reaction to work they decide is “too good,” usually perceived as a tier above the average of the community. In an odd way, when we see someone create really impressive fan work, whether it be art, music, stories or games, our first instincts are to tell them to stop; that it’s time to create something original, instead of contributing further to the fandom. It’s a unique form of self-destruction we employ, but with good intentions. Ultimately the complainer doesn’t want to see the person limited to scribbles of Shadow and Mario when they may be able to develop great new concepts they can then focus their talents around. The thing is… that’s not guaranteed, and in some cases that’s the opposite of what happens.

Some people work better when given a predefined structure. This isn’t an opinion, it’s a simple psychological truth. You give them five dozen pots of paint, and the options become too overwhelming, or too vague for them. However, you dollop four colors onto their palette and tell them to work from there, maybe give them a starting ideas like painting a sailboat, and they’ll make it happen in the most stunning ways. It’s not because they’re simple or unimaginative, it just takes something different, more specific to flesh out their ideas, rather than a complete creative ad-lib. Some would consider this a bad habit that needs to be broken, but it may not be breakable. It may be something that persists with them most or all of their lives, and no amount of strapping them down in front of a blank canvas and telling them to “make something unique” will change that.

The issue is that, like some people perceive it, I’ve made it sound so far like a deficiency when I’m trying to describe a mentality. It’s more about enjoying working in those confines, or changing the rules without completely trashing the game. And in today’s creative landscape, there have been so many ideas explored and tested that developing something truly unique has become an overwhelming challenge. Take a look at the movie industry if you need any proof: it’s collapsed into remakes of prior cinema, more remakes of aging tv shows, and “long-lost” sequels that most people would prefer to stay lost. Yes, you Dr. Jones, get back in the fridge. While in some ways this is a reflection of the economic downturn and the fear of risks associated with unestablished properties, in other ways it’s a clear view of how flooded the market is with prior cinema, to the point where new scripts too easily adapt to old properties, ultimately resulting in little to no novelty.

Movies are not the only creative realm with this issue, clearly. Writing, artwork, music, all have so many creative minds sharing their work in ways not possible even a decade ago, with a traditional back catalogue stretching hundreds to thousands of years. Game development is a relatively fresh landscape, but even now too many games fall predictably into classifiable themes and remakes. In some cases fans don’t trust the developer to make something original, preferring the safety of a remake. And sometimes they don’t even trust that to happen, deciding instead to take the matter into their own hands.

So you have some people that work better in creative confines, and you have others that do it out of their enjoyment of the series as a fan, wanting to see what they believe are the best parts of it shine that much brighter. So is there really a clear-cut point when fan work should stop? If you’re trying to land a professional role in that field, often that answer is yes. But even that’s changing in today’s IP-rich industries. Fan artists have been repeatedly hired to work for the Archie Comic’s Sonic the Hedgehog series, such as Dawn Best, Jeff Axer, and Jonathan H. Gray. Now as lead writer is Ian Flynn, for not only the main book, but off-shoots like Sonic X and Sonic Universe. Somewhat unique cases, but I believe a sign of the developing times. Even a legend like Shigeru Miyamoto has entrusted The Legend of Zelda series to Eiji Aonuma, so he could focus on developing new software ideas. But even when a professional makes it, the fan work doesn’t stop, it just becomes something quiet to the side, shared with friends and colleagues. Sometimes it even leads to new and unique developments, like a sequel to a series long dead, or a crossover that may never have otherwise happened. Maybe you one day find yourself in creative control of the very work that inspired you. 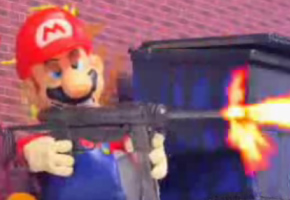 That’s a big maybe. The cold shower is that tens of thousands of people love Mario or Sonic or Metal Gear games enough to want to be a big influential part of the series development, and many of them have ideas that don’t mesh together. Some of these ideas would radically change the series targets and base themes, others would mire themselves so deep into traditional and classic ideas that not one fresh concept would be highlighted. Just take a look at the wide range of games at the upcoming Sonic Amateur Games Expo, and pick one at random. Will it be a game about Vector the Crocodile using his hang glider to behead possessed cultists trying to use the power of the Flesh-eating Emeralds? Or will it be Sonic in Green Hill Zone running around loops? Who knows, they may even get crazy and use a synonym for green! The issue is, while sometimes these projects are made for fun and laughs, even though that Vector game would easily be GotY, these sharply-contrasting concepts can often be where the creators really think the series should go. It should be pretty clear to you how well those two thematic structures would mix. Then again, I may have just tapped the secret of Genocide City Zone… Nah.

So the hard, ugly reality is that you’re one of at least 10,000 people who have at some point wanted serious creative control over a series you enjoy. This is the bottom line: you can dream about one day working on your favorite series, but don’t ever plan on it. And don’t be surprised if you do get there, all enjoyment you had for it is robbed away. Knowing the details, having it be your life day in and day out, working on the same project for years at a time, it can kill your love for anything. Gamers who get into game development often have no time to play any titles other than their own buggy, unfinished work. Movie lovers who pick up a camera start seeing the structures and mechanics too clearly; all it took was Fight Club to ruin cue marks for some.

Make the fan work as a stepping stone of learning, or make it because you want other fans to enjoy it. Don’t make it believing you’ll be the next creative to lead the series. It’s not impossible, especially with a title that gets as much travel as Sonic the Hedgehog, but you can’t count on it. Sometimes you’re better off for that. Sometimes you’re not. Just remember that you’re either learning or having fun, not building résumé material. Once you keep that in mind, you stick with it for as long as you want to, not until others think you’re too good for it.