I’d like to address comments I made elsewhere regarding my future participation in Summer Of Sonic post-2011. I’m not sure if you guys are actually aware of what I do for SOS, I know some seem to think I just turn up on the day due to my SEGA connections and sort of take up part of the stage. What I actually do is y’know, slightly more than that.

Everything from acting as the communication hub between the different departments of SEGA, the arranging and creation of the merchandise, the booking of transport, contracts, balancing legal necessities and going quite literally cap in hand to SEGA to get the money to host this event in the first place goes through me. Its hard, its long, it traditionally upsets the other staff as for what seems like ages its only me doing anything.

Ultimately thats the way it has to be and one of these days I hope to God they get that. Its not quick and its not easy and it does mean that often I have to be the parent nobody wants to be and simply go “no” to requests and wondrous ideas the crew has.

Essentially I’m the voice of reality in the team, I’m also the guy who has to conjure miracles from the budget every year. This has nothing really to do with why I’m stopping – I just thought you’d like to know actually what I do, since the vast majority don’t have a clue.

In any case there’s a few reasons I’m not planning to continue past-2011, first up I think you simply won’t need me by then – as I revealed during the SOS11 announcement, some SEGA/Sonic high-ups had actually been in the venue and already offered much more help than I got this year in securing wonders for you. I’ve been the only “working” SEGA employee on the day at all three SOS’s to date – I say working, you don’t think I get paid do you? Heck I don’t even get any overtime – wish I did, I’d probably double my wage(!)

So we may get some more SEGA personnel in future to help out with things like the pods and demos and things like that which is all good. The awesome Community crew have become very adept at SOS and their skill set is quite something, Discoponies’ videos got some very glowing praise at SOE on the Monday afterwards (as well they should’ve).

Second – and this is going to sound very selfish considering what some others give but apologies – I guess, one way and another I’ve spent about £700-£1000 out of my pocket on SOS every year since 2008 and jeez I just can’t afford it anymore. The last two SOS’s have both given me some real financial headaches, and it got to the point this year after some very unexpected post-SOS bills where the other guys have had to bail me out a bit – and I can’t have that. Now I’m not THAT well off ya know and I’ve a family I need to take care of, ultimately they come first in any matter.

Thirdly –  I kinda hope by then I might’ve moved either onward or upwards by the time people start thinking of an SOS12. I don’t want to be Sonic Community Manager forever, I actually think I could contribute to the brand higher up. Fact is though that once the grind of one SOS is done I have to go straight into another marathon grind towards the next one at present, frankly its depressing as hell – especially when you consider I’m probably the person who gets to enjoy SOS the least. Hey, I didn’t get to see Crush 40 this year – I was too busy de-rigging everything so we could meet our times for pick-up. I’m kind of okay on that, as I often say to the likes of Urtheart (another who misses out on things) – if I don’t do it who is going to?

Fourth – and this part saddens me the most – I honestly don’t think I’ll have the heart post-SOS 11 to do it anymore. Much as I love tearing myself to shreds for everyone, damaging my health, working myself to quite literal collapse for the greater good of the fanbase and the frankly awesome spectacle that is Summer of Sonic. And it IS awesome. It is unique. It is fabulous. Don’t let anyone, the trolls, the haters, the troublemakers, the people who don’t “get” it tell you otherwise. SOS is great for the fanbase – it celebrates the fanbase. However whilst its great for the fanbase, SOS has not exactly had much love for me over those years.

Truth is all these years of being battered and battering myself with endlessly long hours for SOS I’ve just reached a limit and had enough.

To say SOS is hard on me is a bit of an understatement, I’m very worn and tired and after a while that just doesn’t go away. Not helpful when SOS is on top of my normal, already stacked workload. People complain at me that I’m a workaholic and I should delegate more. The reason I work THAT hard is because I need to work that hard to get the thing out the door – if I slowed down the work would still have to be done and there’s an awful lot as I said earlier, that can only be done by me.

A lot of people I spoke to after SOS 09 were actually quite distressed at how bad I looked; what you don’t perhaps know is just how bad I was. By the time we got home I could barely physically move and once the door was open I recall leaning against a wall…. and then the world falling. I spent the next 12 hrs essentially in a delirium; if you listed to the post-SOS09 Radio Redux show its obvious in places I’m still not really all there. (Looking back now I’m astonished I was even able to do the show.) My wife ended up having to transfer liquid to me mouth to mouth in order to get some fluid in me – this was after 30 minutes of struggle for her trying to pull me up the stairs with me flitting between being KO’d and semi-awake in utter agony. If you’re interested in what liquid it was, she tells me it was Pepsi.

To be honest I had to do a lot of soul searching after SOS09 to do 2010 as it was. I damned near killed myself at SOS09 and afterwards I was rather dismayed to find myself mostly left out of the general thanks and acknowledgements from the people who went. I hardly want people to start doling out statues and awards to me but I’d kind of hoped to, y’know, be acknowledged outside of the staff and the few who knew me from visiting Wrecks or community days. So when everyone was just thanking TSS for all their hard work I’d be lying if I said that didn’t hurt me quite a lot. The Wrecks team were actually quite disgusted by the situation and really didn’t want me to continue with SOS10 which I did anyway (and gladly) out of a sense of loyalty to the team.

I should say at this point that TSS went out of its way to try and make sure this didn’t happen this year, but ultimately it doesn’t matter, because regardless I just can’t keep doing this.

This year I was very clear to people that it was time they stepped up, which they did – and bar working myself into unconsciousness again (about 7:27pm, mid-desperate de-rigging) I had at least the chance to go to the after party for once, go home and have no-major lingering issues… apart from being very violently ill the next day.

Come the end of SOS10 a lot of people came up and shook my hand all thanking me in various ways for what many termed the best time of their lives. I thank you for that, its for you guys that we all put in the effort to put on what still is at this point in time a free show. A lot of those people were also very concerned with how I was at the end as I again looked an absolute wreck.

Interestingly most people seem quite happy for me that I’ve decided to step aside as everyone seems to think it’d be the best thing for me health wise. Well no shizzle Sherlock. I think the keypoint in the decision though was probably when saying goodbye to a genuinely very concerned Roarz (Roarey Raccoon as was) and him telling me I was a daft bastard, that I wasn’t paid enough for this crap and I was stupid for putting myself through all the stress and strain over and over… and for once I really couldn’t think of an argument against that statement.

Ultimately as long as I’m working with SEGA I will have something to do with Summer of Sonic as either contact or coordinator. Even as a consultant, a balancing factor to keep the community-ness of the event intact. I’m just not going to be the host, I’m not going to do Wrecks Factor or any massive projects, even be backstage or anything like that and I’m certainly not going to be the ultimate head of the whole damn thing.

I just can’t anymore. I’m sorry if I’ve let anyone down.

SOS11 will be a watermark I suspect; it’ll get no bigger than this with it being Sonic’s 20th anniversary. I actually have a few surprises in store for the SOS staff even beyond SOS11. I’m not going to say what those are, but not even Svend knows what I’ve got cooking. Call it… a farewell favour.

My thanks to all the Summer Of Sonic staff who’ve helped so magnificently and magnanimously over the years – you’re all awesome sauce incarnate.

No, Wrecks isn’t disappearing. I’m not leaving the fanbase… at least not yet. Will I attend SOS12 assuming it occurs? Probably. Who knows, I might even be able to enjoy it for once. My thanks to all those who’ve come to SOS over the years and hey its not over yet – we’re just reaching the end of this particular chapter. 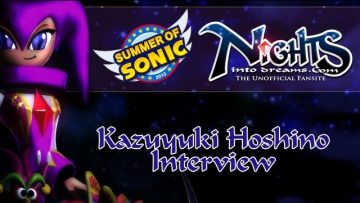