Sorry for the delay on this rather more important things than blogging came to pass! Continuing on from last week, the answers to the quiz that was used to determine who would get to sleep in the Sonic Room are below, thus being the first person to do so.

As it happens we ended up with a three-way tie on 6/10 (the worst score being 3/10), between Dreadknux, his partner  (who actually got a different six correct to Dreadknux) and Overlord from Sonic Retro. Luckily I had a tie-breaker prepped so if you knew that Big The Cat’s weight was 280 Kg you’d’ve done very well here. Dreadknux came closest with a guess of 300 kg. He celebrated. Everyone else looked for something to throw at him.

With Alton Towers in sight we pulled up, after a couple of heart-stopping moments trying to get the coach around the tricky roads of Alton village and all piled out to stretch our legs.  We were greeted immediately by SEGA fan Umiyuri who had also been invited and not long afterwards the coach arrived with the lanky Vger (Emerald Coast) and Shadzter (Sonic Stadium) who despite being none too well had come along to soak up the atmosphere at the very least.

With my merry band of Sonic community guys and online contacts in tow we went through the gates to the deserted ticket area to be met by Sonic.

“Typical you’d have got here first.” I complained, as the hedgehog started tapping his foot and looking at his non-existent watch. Sonic clearly was in a hurry to get on with things, he shrugged at me and started posing for pictures after straightening his spines out a bit (pictured).

After a brief introduction to Alton Towers we made our way down rapidly to the ride which even from a distance looked awesome.

Now, let me tell you, walking through a deserted theme park is pretty creepy… in fact down right unnerving to see the place so devoid of life. Soon though we came to the ride entrance, the ride was already in progress and took some people by surprise, the thought I think was that it was going to be very “kiddie” but no – Spinball is a proper roller coaster with high vertical loops and really fast twists.

Now, let me tell you,

A quick opening ceremony followed, where Sonic discovered that he couldn’t get his gloved fingers through the scissors… whoops!  He remained cool though and got one of the SEGA staff to cut it for him spindashed the ribbon slicing it to bits. Hooray! Everyone piled forward and started taking photos of the ride, getting very excited. Like most major rides at Alton Towers there’s a photo booth where you can get ridiculous images of you either being scared witless or doing an incredibly stupid pose. There was also to one side a collection of three claw machines containing…

After dragging the community guys away from the stuffed toys we realised the ride was now open and race to be part of the queue, though everyone took the time to watch the first public riders of Spinball go around and it became apparent quickly that this was not going to be the teacup ride. Incidentally, for posterity the first public riders were Hollie from Destructoid, TurtleGirl from GirlGamers and G from SEGA Nerds – whether or not G suffered like G did I forgot to ask. Anyway my party got on and after a few moments we were on our way. You know you’re in for a bit of a fun time immediately, its kind of disconcerting making the first climb looking diagonally from the direction you are going.

The car swings around as you go which is obviously somewhat dependant upon the people in the car so every ride is different. The first few turns were great fun, however with the car swinging I was actually facing away from the ride when it happened – we hit the first big drop. Of course being unsighted I didn’t actually see the first big drop and I was completely unprepared for it… I also did it backwards so I’ll admit it scared the hell out of me. Big loops at breakneck speeds soon followed including the big vertical loop where you are at 90 degrees (I was facing skyward on that one again taking the big drop backwards).

We went on it a second time as people began getting their free photos, courtesy of Alton Towers.  The community enjoyed the ride immensely, had great- 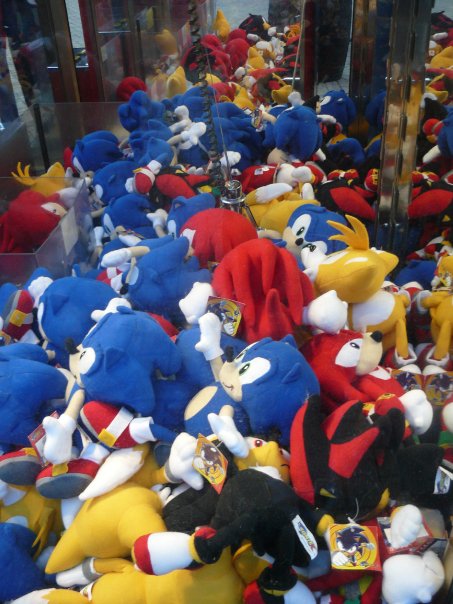 fun and were keen to get as many goes as possible-

to perfect their Spinball photos, after all the-

-OH OKAY you can go on the blasted crane machines!

Honestly, show a Sonic community person a crane and a plush and they will immediately go for it.  Of course being the CLAW MACHINE KING I immediately retrieved several to general coo-ing and clapping. I gave away several to community members as my skills paid their plush requiring bills.  I think I won about ten or something ridiculous like that. Claw machines and those Arabian Derby/Dolphin Race ‘roll balls up an alley into holes to make your character move’  machines – I’m ace at both. Something rather strange happened though, because the pound I put in seemed to be magic…in that it gave us all rather more goes than it perhaps should of done. Ho hum, plushies for all!

Actually the amount of plush toys the crew’s collective efforts across all three machines resulted in got kind of embarrassing and I had to physically drag Flyboy Fox and Turbo from the machines when we realised that people were going back to the hotel bar to check in so we rushed back.

In an ironic twist of fate a discarded plush from another claw machine was found abandoned on top of a nearby bin. You’d never believe what it was if I just told you so we took a picture of that as well!

In the next blog the the community crew hit the bar, Dreadknux hits the Sonic Room and we gear up to par-tay!

1. What’s the number of (controllable) female characters in All-Stars Racing ? This does not include Avatars, Miis or any that may make up part of the scenery of a stage – like Samba’s Lynda for instance.

2. Including Sonic, how many characters were in the axed band idea from Sonic 1?

he character that would become Vector!

Green. Everyone got this right, I wonder why(!) I did joke with the guys that I’d’ve also accepted “does it really matter” or “gumball coloured”.

4. Nigel Kitching from Fleetway’s Sonic the Comic wanted to include Big the Cat in the Sonic Adventure storyline as he reminded him of which anime character?

5. What’s the name of the main boss in Sonic Chronicles? A bonus mark was also on offer for the name and full title.

Ix, full title being Imperator Pir’Oth Ix (no one got that incidentally)

6. As you all no doubt recall Shadow cursed during his game, but other characters also did – name one.

Espio and the General where the main ones I thought of here… but there are others.

7. What was the name of the bear animal friends from Sonic 2?

8. What were Sonic and Tails sleeping in in the Adventures of Sonic The Hedgehog opening?

9. In the Egyptian episode of Sonic Underground’s song, what word did Sonia “cleverly” rhyme with “brothers”?

“Brother” – yes, you read that right. She rhymed brothers with brother.

10. Omochao has been in a SEGA franchise other than Sonic – what? 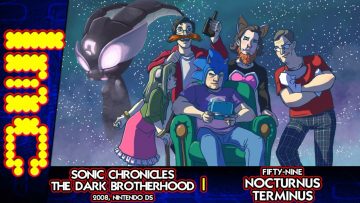