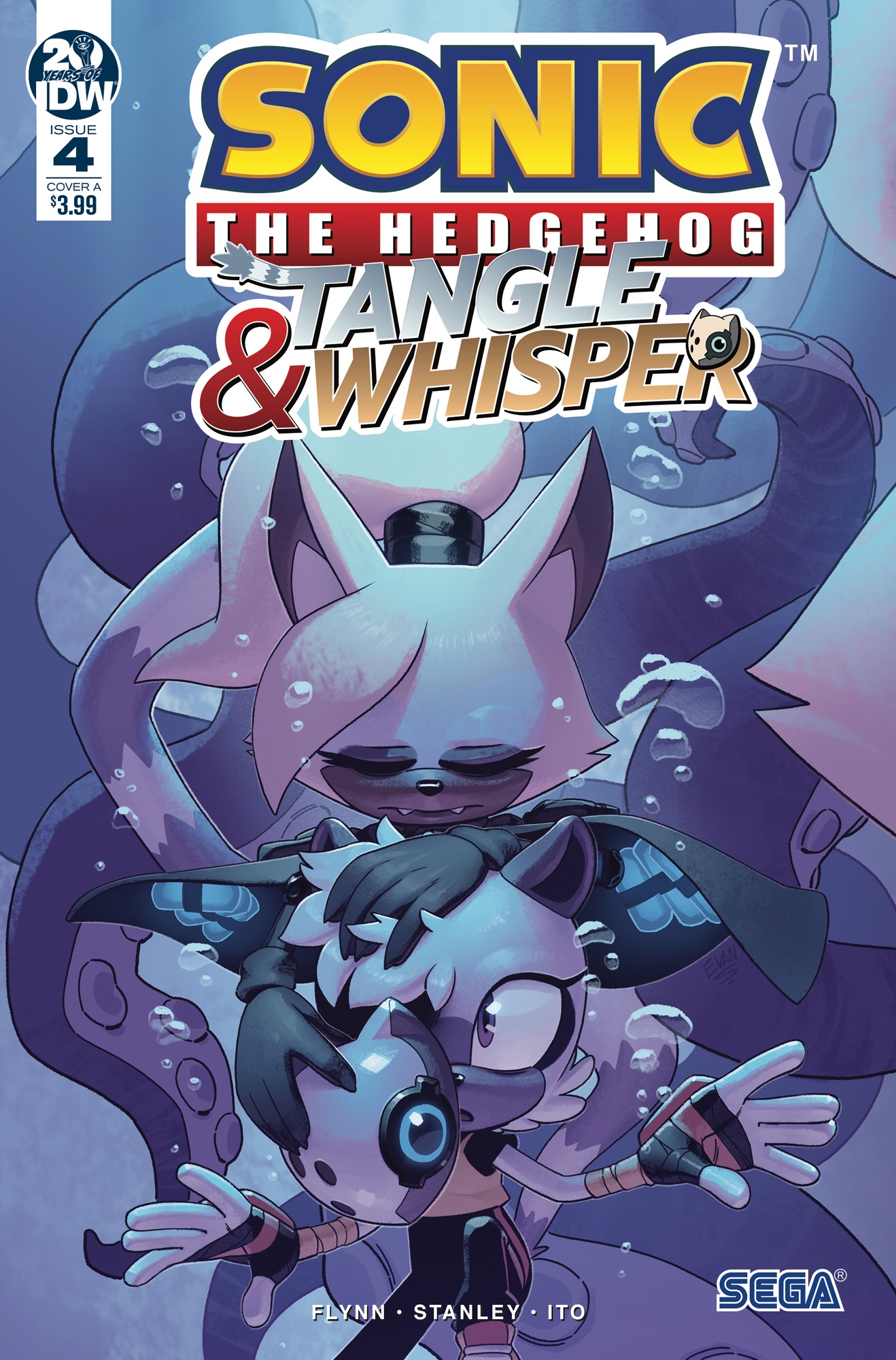 Welcome back to the Tangle and Whisper reviews! Yesterday we looked at issue 3, today we finish our work issue 4, where the fight goes straight to Mimic.

Our finale starts off at the old Diamond Cutters base, which has been blown to smithereens in the past. Our duo is waiting for Mimic, who brought the Eggman brigade with him to fight. Not to worry, Whisper uses her wispon to take out the Bug Bots. However, this was a decoy, and Mimic is sneaking onto the base as they speak. Tangle leaves Whisper to enact their plan, and Whisper stays behind to handle the Eggman robots.

While Whisper handles the badniks, Tangle runs into Sonic, who found out someone was running around impersonating him and came with Tails to lend a hand. Tangle leads Sonic into a room with masks, and reveals the Diamond Cutters video, and Mimic is revealed to have been impersonating Sonic. Tangle confronts Mimic, and the two banter for a bit (this will be discussed more in a few). Mimic turns into Jewel and he and Tangle duel for a bit while Mimic talks about friendship being a weakness.

Whisper joins the fight and together, she and Tangle fight Mimic. This lasts several pages with some minor back and forth dialogue, mostly coming from Mimic. They finally get him restrained, and Tangle has to talk Whisper out of shooting and killing Mimic. Instead, they take him to Tails (the real Tails, no more doppelgängers). Tails built a cell that’ll keep him from escaping, Tangle even threatens Mimic with Eggman’s hostility toward Mimic’s past failure. Now with Mimic captured, he can be safely transported to a prison, and the issue concludes with Tangle and Whisper parting ways.

This one I was expecting to have more action in it, so it doesn’t surprise me that there wasn’t as much to read. I mentioned earlier there was some dialogue is I want to discuss. We learn a little bit about Mimic’s side of things, he didn’t view the Diamond Cutters as friends, or comrades, which is why it was so easy for him to turn on them. He even says “heroes become martyrs, professionals stay alive”, and Mimic is a tried and true professional mercenary who clearly didn’t like where the Diamond Cutters were taking the team. This was an awesome little piece of dialogue, made even better by the art that went along with it. I also appreciate how well written the fight scenes were. Readers might not see that, but when script writing for anything, comics included, the script needs to be detailed enough for the artists to draw what the scenes entail, including (and especially) with action scenes. This is definitely something I can appreciate just based off my own knowledge of how the process works.

As far as the art is concerned, as always the art is incredibly well done. I have to give props to the artists for their skill in drawing the action sequences. I definitely find that some of the motion conveyance in art is difficult to do well and the artists did this incredibly well. The panels move in great sequence between each motion and it’s wonderful. Otherwise I enjoyed the color schemes they used and the art style.

Overall, this was a great conclusion to a miniseries I really didn’t think I’d enjoy. Even now I really think that this is a series I could take or leave, but I will say that the conclusion was incredibly well done and made reading the first three issues well worth it. Tomorrow I’ll give my full opinions on the series as a whole in my overall review, but for now that was it for Issue 4. What did you guys think of the conclusion to Tangle and Whisper?