Home Articles VR vs. VR vs. 10 Franchises SEGA Would Be Crazy Not To Bring To VR – Part 2

Hello everyone I’m back to talk virtual reality (VR) and the House of Hedgehog for another week. As you may recall last week on VR vs. I started a list of ten franchises (and one honourable mention) that would – in my opinion anyway – be great for the leap to VR.  SEGA is of course no stranger to VR down the years, there was the SEGA VR for instance. A headset which was initially designed with the idea that it could provide support for not just the SEGA Mega Drive/Genesis and the SEGA Saturn but the arcades as well. A project that would have seen a 1994 release date after being revealed at 1993’s Consumer Electronics Show (CES) event. This in itself is not to be confused with the SEGA Master System’s 3D Glasses that allowed you to play a number of titles in quote-unquote “3D”. Yes, such things existed.

But enough of the hardware of the past let’s get back into those games franchises, eh? What else, via way of a lick of virtual paint, could hypothetically make its way to modern VR? Well when it comes to SEGA sometimes you’ve got to make some tough choices (as any long time SEGA fan can probably tell you) and when it comes to this list there’s one or two games that could easily occupy the same space.  Such a dilemma can be found with our next title, it was a tough decision in the end but let me explain my reasoning.

Admittedly having a game with “cop” and “kill” in it isn’t going to win much in the way of good publicity, but this combination name should tell you everything you need to know about where I’m going with this. For you see when it comes to VR genres we have the ever popular (and increasingly railed against) wave shooter, and it just so happens that for SEGA two franchises – Virtua Cop and THE HOUSE OF THE DEAD*. I could give you very good reasons for both being on this list but I’ve gone with Virtua Cop. Why? Because put simply we’ve not had a Virtua Cop game for nearly fourteen years. 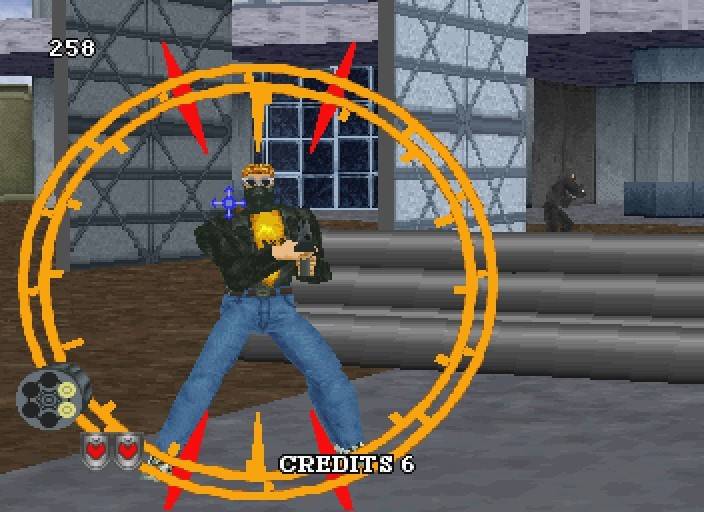 Yet people still think of the series fondly. HOTD on the other hand has had quite a few iterations, is a staple of SEGA’s All-Stars franchise and has proven itself to be an arcade mainstay. In other words, if you’re going to use VR to help elevate some old properties why not help the one that needs it more.  Increase your viable library of characters. Increase the interest and hence their and your value. At the very least you’d raise some interest in getting some ports of the older titles going.

For VR the idea is simple. We have wave shooters, and the idea of having such a game where hiding behind some oh so handy barrel or outcrop of rocks isn’t 100% infallible makes it a far more frantic experience.

But what about the suffix? Well people familiar with HOTD will like as not recall the Wii game THE HOUSE OF THE DEAD: OVERKILL. UK studio Headstrong’s entry into the series took the franchise, supposedly back to the very beginning before all the nonsense at Curien Mansion and into the shoes of rookie cop and series protagonist Agent G. Except things weren’t quite as people were used to with the game. OVERKILL took the franchise to 18/R-Rated territory by spoofing the grindhouse genre. Partnering the straight-laced G with foul-mouthed Detective Isaac Washington a man incapable of finishing a sentence without a s***, f*** or m***********. (Except, ironically, at times when it would technically be accurate. Long story.) In fact there were so many swears it actually held the world record for number of swears in a single game for some time. Eventually only taken out by Grand Theft Auto 4 I believe.

The video below features some… examples of this. You have been warned.

OVERKILL might not have set the world alight with sales but it, along with another SEGA title, Platinum Games’ MADWORLD, certainly held up the ‘adult’ end of the Wii gaming spectrum. It was later ported to PS3 and given extra levels, ported to mobile and eventually PC where it was converted yet AGAIN this time adding old SEGA favourite THE TYPING OF THE DEAD into the mix. Four games from one game. Not bad going, huh?

The point is OVERKILL was very tongue in cheek about the franchise’s own foibles, and that’s in a series that was already very self-aware. It was so fresh and different why not do a similar trick with Virtua Cop? Turn it into a self-aware parody of all those 80’s cop shows. Or even the 90’s, you meta humour all over the place then about old VR tech. Make it these two ridiculously out of touch cops dealing with endless suited gunmen in shades, ninjas and all the other light gun game staples who for some reason think this is perfectly normal. Make it Miami Vice on acid with a smart mouth and a stick up it’s ass. Make Virtua Cop but HOTD: OVERKILL.

Then let me know so I can buy it.

NiGHTS is a pretty deep franchise, if you did but know it, and one I have all the time in the world for. Not only do they have the most friendly fan base I’ve ever met, (no really, they’re all lovely) the game is fun, scary and promotes an array of ideas that would be very interesting to explore in VR. For a start there’s the obvious connotations of dreams and nightmares, and Sonic Team had no problem going dark. This shouldn’t be a massive surprise since in one of their games they once showed the moment a little girl gets shot for goodness sake**.

But NiGHTS isn’t just about dreams it is about the psyche itself.  The original idea is based on the works of noted psychoanalysts Carl Jung and Sigmund Freud.  The ideya you collect are aspects of the Id – your personality traits. Hope, growth, intelligence, purity and lastly courage. Even their colours weren’t chosen randomly. The game deals with the topics of freedom, confidence, growing up, parental issues, loneliness, friendship, the idea of two people sharing the same experience and trust. NiGHTS is after all actually a Nightmaren – the bad guys. Trusting the person based on their actions and not on the preconception of where they were born is also something NiGHTS and particularly Journey of Dreams (which has more of an outright story) touches on.

It is also about freedom and flight. So I want you to now imagine a first person NiGHTS game, one where you actually get to feel the simulation of flying, where you travel through a colourful level doing tricks and collecting… balls. And things. Now take that landscape with its SEGA blue skies and popping colours and what if we added a touch of Nevermind to it? What if the game reacted to your character’s welfare and became more dark and twisted the closer you came to running out of time or whenever you take a hit?  It’s not that far fetched. The various levels in NiGHTS, the world of Nightopia is shaped by the Visitor (your character).  The levels are given subtitles such as “The IDEAL”, “The POSSIBILITY”, “The CONFUSION” and are all based on relationships and aspects of their lives.

The feeling of flight and a bit of psychology. Sounds interesting?

We all know that driving games can be translated over to VR, some of which can be done very well indeed. But what about SEGA? It has a number of driving franchises that you could port. But All-Stars Racing was never going to be on this list. SEGA Rally was a distinct possibility but no, I turned down that too. Initial-D was a strong contender considering its arcade longevity and popularity specifically in Japan.  But ultimately the choice to fill this spot can only be OutRun.

OutRun has, for decades, been not just about the game but about going as fast as possible in a sweet looking ride to impress the girl. About owning a Ferrari and being the personification of cool. It sells you a fantasy, one that gives tremendous satisfaction. A ‘long-medium right’ done well is one thing, but it doesn’t match slamming the steering wheel to full lock as you drift around a car and through a narrow gap between two buses in your Testarossa (or a British racing green Ferrari F40 if you’re me). It just doesn’t.

Taking a first person viewpoint and actually living the ride would be quite something. But there’s another reason VR would be an interesting mechanic for OutRun. Do you not remember you have a passenger in your car? A passenger who is very… needy in her desire for you to GO FAST! KEEP PASSING CARS! DRIFT MORE! ETC! As she either falls in love with you or, you know, violently attacks you because you clipped a barrier. If you’re actually in the car with her it gives the game an extra dimension as you’ve got to check how your would be lady (or gentleman – I think some choice on who your passenger and driver is should definitely be included at this point) friend is reacting to the ride. They also in doing such act as a distraction, and OutRun is always a balancing act – particularly in Heart Attack Mode – of balancing speed and safety.

For me it’d be a very interesting mechanic to explore.

That’s all for this week. Next week we round off the list some more games including one I suspect none of you will have guessed is on my list. Until then!

* Old SEGA employee note: For some reason THE HOUSE OF THE DEAD is always supposed to be shown in capital letters in SEGA materials. It’s part of the branding guidelines. If you see any SEGA official messaging with the game not in upper case it has actually been done wrong. #TheMoreYouKnow

** In Shadow The Hedgehog the moment young Maria Robotnik is fatally shot by government soldiers sent to wipe out the ARK facility is actually shown in the light of Shadow’s eyes at the end of a flashback. That’s messed up, Sonic Team.