I’m a big fan of The Elder Scrolls. Ever since I first woke up on that boat and became the Nerevarine, fighting off cliff-racers, I’ve been hooked. Morrowind captured my heart but Oblivion captured my soul and The Elder Scrolls has been one of my favourite game series since. Like every other fan, the thought of a Skyrim with multiplayer filled me with a certain amount of dread. The Elder Scrolls games have always been a lonely adventure; you against the magical world of Tamriel. If not cliff-racers, then Daedra or dragons. And now, with The Elder Scrolls Online, Tamriel has been opened up to everyone and their pet mudcrab. You’ve got the likes of 1337killer1999 to contend with.

So, as a devoted and loyal citizen of Cyrodiil, Morrowind, Skyrim etc, I wasn’t entirely sure how this alchemical experiment of TES gameplay mixed in with Massively Multiplayer Online Role Playing was going to turn out. I love my RPG’s and I love my MMO’s. I’ve never been a fan of World of Warcraft, partly because I’m a MMO hipster, but I’m a hypocrite too because some of my favourite MMO’s have basically been WoW clones. There have been some interesting MMO’s of late that have tried to push the boundaries away from being a WoW clone; Guild Wars 2, The Secret World, the upcoming WildStar. And The Elder Scrolls Online? Well…

It was never going to be easy to take Skyrim and turn it into an MMO, but Bethesda have done the best they can to capture the same look and feel. When The Elder Scrolls Online was first announced, it was shown as a third-person affair. It didn’t look like The Elder Scrolls; it looked like a WoW clone set in Tamriel. The outcry was justified. Since then, it has undergone a transformation to be more like Oblivion and Skyrim with a default first person perspective. What we’ve been left with is a Skyrim/MMO hybrid with hopefully enough of Skyrim in the mixture to stand on its own. I personally feel that it is more than just an MMORPG in Skyrim‘s clothes.

The world looks like a sexier, HD version of Skyrim, especially if you start out as the Ebonheart Pact which plonks you right down in the snowy lands familiar to Skyrim players. The UI and HUD has also taken inspiration from Skyrim and should be instantly recognizable. Even the default combat feels the same, allowing you to attack and block in roughly the same way. There are some obvious differences. The most notable is combat. Whilst every effort has been taken to keep it as close to Oblivion and Skyrim‘s play style, it is not a direct translation. There is a taskbar with skills, same as any other MMORPG. You can sneak, but sneaking only leads to a critical bonus and doesn’t feel as immersive. The bow auto-attacks the target you aim for, which removes the necessity for aiming in the first place, and you can only shoot from a certain distance. But the major complaint with the combat system is that melee combat can feel weightless, as all enemies are corporeal and can literally be stepped through. Nothing new in the world of MMO’s, but again, this can break immersion for those Oblivion and Skyrim players who want to feel some ‘oomph’ to their attacks. However, learning skills help alleviate some of that, bringing much needed ‘oomph’ to combat. The bow on its own grows tiresome, but with skills to rain down arrows from the sky, it’s more fun. The sword and shield combination also feels quite fun when you have skills to stab and throw rocks at people’s faces. Using magical staffs and magic spells feels even more natural in a MMO environment.

The Elder Scrolls games have always been open when it comes to picking out your character and choosing their destiny. The character creation system is as detailed as you would expect, and whilst there are standard MMO classes for you to be boxed in to, you can choose which weapon and armour combinations you want to invest skill points into, and like Skyrim, you place a point into either health, stamina or magicka open levelling. This gives you a lot more freedom than most MMO’s and you can still have your battlemage Orc if you want.

One of the other big differences I noticed straight away within the starter islands was the scope. Everything is so much bigger. The villages, the houses, there’s plenty of space for everyone. It did feel a little empty at times, but there are plenty of NPC’s and natural life running around to help counteract that. Whilst everything feels bigger, the starter islands are much smaller than what we’re used to, and is this is also a common complaint from people who have played the beta. Thankfully, the game really opens up after the starter islands with more optional dungeons to explore, and in the final game, player’s will have the option to skip these smaller islands if they wish. They serve as a good introduction to the game, lasting about two hours unless you really explore, but the real Elder Scrolls vibe of exploration didn’t kick in for me until after these starting areas.

For those who really take their role-playing seriously, you may wonder how it feels to have 1337killer1999 and his group of criminal scum running around you whilst you’re trying to sneak into a cave to complete a quest. Honestly? It can feel odd to have other player’s jump in and act out the exact same quest, and this may take some getting used to. The game could do with more instanced-based areas for people who just walk to explore a dungeon on their own or with their pals, as these smaller areas don’t really lend themselves to a massive world of people. Seeing a tavern full of player’s strumming on their lute and doing push-ups on the ground is something I’m not likely to see on my own though.

I’ve played through two weekend beta events, through the starting areas of all three game factions. For those completely out of the loop, the nine races are split between the Ebonheart Pact, the Daggerfall Covenant and the Aldmeri Dominion. The Ebonheart Pact is an uneasy alliance between the Skyrim Nords, the Morrowind Dark Elves and the Argonian lizard-folk of the Black Marsh. It’s predicted that this faction is likely to be the most popular of the three due to the success of Skyrim and the nostalgia of Morrowind. Compared to the other two, the world is much darker, focusing on the snowy areas of Skyrim and the alien volcanic ashlands of Morrowind. Next up is the Daggerfall Covenant, a mix of the human-ish Breton, the Orcs and the Redguards. Out of all three factions, I enjoyed the story of these guys the most. With the Covenant, you’ll get to explore deserts and what felt like the quaint English-countryside of Cyrodiil. It was whilst exploring the territory of High Rock that I had an odd flashback to Oblivion. I was happily skipping along the fields when I heard the familiar twang of Nirnroot. Having been haunted by that awful ringing all of Oblivion and Skyrim, I clenched my jaw and tried to ignore it, until I realised I wasn’t playing either of those games.

One race I have missed out is the Imperials. These have always been the default all-rounder race in The Elder Scrolls games and, sadly, are only playable if you are willing to slap down almost a hundred pounds on the Imperial collector’s edition of the game. Which brings me to another common complaint of the game; locking off content. The Elder Scrolls Online uses a subscription based model, and the default nine races are locked to their specific faction unless you pre-order the Explorer’s Pack version. This is disappointing enough, but to also lock off the entire Imperial race is taking greed to a new level and makes me wonder if these options will be available later… At a price.

I haven’t made it to PvP yet, so I can’t comment on that. I was having too much fun doing what I do in every other Elder Scrolls game; wander around aimlessly and shoot helpless animals with my bow. I’m told the PvP combat is some of the best fun you’ll ever have in a MMO, and the entire PvP area is supposedly the size of Ovlivion‘s Cyrodiil, partly because it is set in the entirety of Cyrodiil. Quite how this will turn out, I have yet to discover, but I am keen to do so.

PvE questing feels more like Skyrim, less like any other generic MMO quest. After a few hours of story-based quests, I realised that I had not once being tasked with killing fifty mudcrabs or fetching a bazillion Nirnroot. Instead, hunting and farming for materials was a task I took on myself to experiment with the crafting system. There are natural resources and helpless animals all over for me to pluck and crafting will allow you to make weapons, armour, food, potions, enchantments… It was fun and easy to use, and each race have their own racial style when it comes to creating armour or clothes.

So far, my experience with The Elder Scrolls Online has been a positive one, not just because I have the chance to explore more of my beloved Tamriel, but also because as a MMO, this feels different from every other MMORPG that I have played. If you’re a fan of The Elder Scrolls series and MMORPG’s, then £8.99 a month is a small price to pay for such a massive and amazing world to explore, I feel like I have barely scratched the surface. However, if you loved Skyrim but hate MMO’s, or hated Skyrim and love MMORPG’s, then this may not be for you. The game still has the usual Bethesda bugs that need to be ironed out before its release in April, but with more beta weekends on the horizon, now is a good time to grab a beta key and try it for yourself.

Of course, the console version launches on the PlayStation 4 and Xbox One in June, and there isn’t much MMORPG competition on consoles these days. Time will tell if The Elder Scrolls Online is better served on console, than on PC. 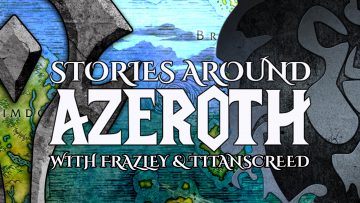 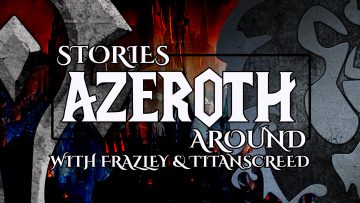 Stories Around Azeroth: Something to Rage About (w/ BerzerkerRage & Nav_Ox of Unshackled Fury) 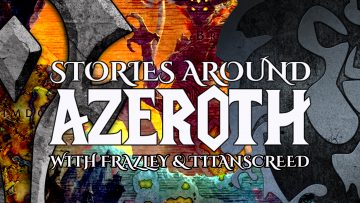