Japan had it – obviously in 2016. America had it at MAGFest. Now it looks highly likely that the UK is also going to get a chance to check out the Sonic Adventure Music Experience (S.A.M.E), a live performance of music from the Sonic Adventure series and more led by SEGA musician, Crush 40 guitarist and friend of LMC, Jun Senoue.

Should the Kickstarter be fulfilled, which at the time of writing stands at approximately £9,000 of its £13.5K goal, Senoue will be joined from Japan on December 8th at venue The Garage in North London by long-time Crush 40 bassist Takeshi Taneda and Act (yes that’s really his name) who is also the drummer for Crush 40.

You can join us in backing the campaign over on Kickstarter here.

The Kickstarter has been put together by Svend Joscelyne and Adam Tuff of the Sonic Stadium, and co-organisers of the Summer of Sonic events. In fact the whole shebang is ‘Summer of Sonic presents S.A.M.E.’. 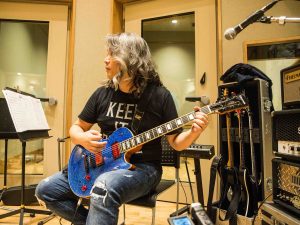 “The Sonic Adventure series defined the sound of the modern Sonic the Hedgehog era, firmly cementing the rock theme as a staple for the games that followed. It is an honour to play host to the Sonic Adventure Music Experience, and a privilege to be given the opportunity to hear them perform live in the anniversary year of Sonic Adventure‘s release.” Said the duo in a statement on the Kickstarter page.

Senoue adds: “I have attended the Summer of Sonic convention five times since 2010 and I have had a wonderful time every visit. I have enjoyed playing Sonic-related music at the event, but I have always wanted to bring the full band with me, to create the full-band performance like we have for our shows in Japan.

“Finally in 2018, MAGFest brought all of us to the United States to perform Sonic Adventure Music Experience show and it went really well. We want to celebrate the 20th anniversary of the western release of the Sega Dreamcast and Sonic Adventure along with the huge success of the latest Sonic related game, Team Sonic Racing, with you all in London.”

Much like an SOS backers are coming from all over the world. Kickstarter stats tell us fans in the UK are being joined by those in the USA, Spain, Netherlands, Canada, France, Italy, Poland, Romania and Sweden.

We will know if the campaign has been successful by the end of the month.

Just to be clear to folks out there and other news outlets who are reporting on this, as I have seen some confusion over it and already had to field a question about it, it is the Summer of Sonic organisers, and not the ‘SOS team’ that is presenting this. No one, to our knowledge, from the decade-long core team at SOS of The Sonic Show, RadioSEGA, SEGA Driven, Emerald Coast or ourselves at Last Minute Continue are involved with the event. Nor were we aware this announcement was being launched yesterday. While steered by TSS (at one time with Sonic Wrecks, LMC’s former identity), ‘Summer of Sonic’ is and always has been a combination of efforts by multiple fan outlets and many, many loyal and extremely talented people.  Whilst we of course wish the event all the best, as any excuse to see Jun is amazing, this clarification is regretfully required.