When it came to celebrating Sonic Wrecks’ birthday, there were many things that happened to coincide with the annual party. AAUK would be busy hosting the festivities at the DJ booth, Blake would be the life and soul of the party with the very draconic Ram, and Vger would be at the port…Though he probably wouldn’t need a celebration for that. And in one corner, Urtheart would be telling the others about his many adventures. Probably with an Akhmin nomming on his head.

Seeing as the final chocolate cheesecake slice was taken by those Last Minute Continue guys, I’m in a foul mood. And that can only mean one thing…

Hello, and welcome to Upon the Quartered Border, where awful webcomics burninate. Today, we’re looking at a comic that redefined the whole nature of web comics. A tale of love, loss, betrayal, rings and squishy things. Sadly, it’s for all the wrong reasons; with inconsistent characterisation, stupid plots and delayed updates that make “Revolution of the Mask” seem regular. We’re taking a trip back in time to where it all began many years ago. Today, let’s dig into Sonic Wrecks #001 to see how it all started and where it all went wrong for our hoggy hero.

Firstly, some background. Sonic Wrecks was created in 2004 by Kevin Eva (originally known as Angelus, then AAUK, then AABL, then back to AAUK and finally as supreme overload of the 9th dimension). Sonic Wrecks is part of the most sinister of all webcomics genres – a sprite comic. For those who don’t know, a sprite comic is a cut & paste style of webcomic that is often used if the creator can’t draw very well. However, in most cases it’s a symptom of absolute laziness and normally exposes bad writing and poor ideas. So kinda like a Sonic game then.

In its many years of non-updates, Sonic Wrecks started as a basic 4th wall breaking comic exposing loopholes and foibles in the Sonic series. It then later went into its own deranged story, involving original characters from staffers of the site and beyond. The story reached an, admittedly impressive, high point when Metal Sonic managed to “blow up” the site and cause massive devastation before a very disappointing final act. So kinda like a Sonic game then.

But, I’m getting ahead of myself. Today, we’re focusing on comic #001, created on the 4th July 2004. Looking at its cover…well, there is none. Some comics do like to start their comic with a title page, but this jumps straight into what it calls action. But anyway, onwards we go!

We open with two hedgehogs in their super form; Sonic and Shadow. This picks up right at the end of Sonic Adventure 2, when they’re about to stop the ARK falling to…I assume it’s Earth, but given the game series can’t make its mind up between Earth or Mobius, I really don’t know or care which world this is supposed to be. Art wise, the comic starts its series with generic sprites. On the plus side, these seem to be semi-professional custom ones opposed to those ripped from the games and sloppily edited. On the downside, EVERYONE uses them. Thus, they’re not unique and pretty bland. So kinda like a Sonic game, then.

The writing is fairly basic in these opening scenes, and that’s expected. It’s an 8-panel web comic, not Teen Titans or Deadpool. You’re setting the scene, but even so, you don’t exposit things that can be said better via a different medium. The lettering is also fairly bad, with inconsistent text sizes. Sometimes even in the same box. It can be jarring to read but, luckily, this was rectified before too long. Anyway, as the comic goes on, Shadow goes on about his concerns of his alignment 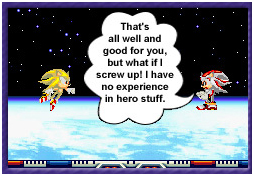 And we all know what happened when you last tried to be a hero.

Okay, yes. I KNOW Shadow the Hedgehog didn’t happen yet in the games. Cut me some slack, will you? 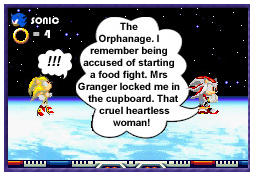 Anyway, the conversation eventually turns to Shadow’s past and his…time at an orphanage? Really? An orphanage? Despite the fact that disregards the entire plot of Sonic Adventure 2 for an odd gag, it makes no sense. Unless it was a failed pilot for Sonic Babies I really can’t see how it would happen. It makes as much sense as me doing a review in the style of someone else. And we all know that’s stupid. 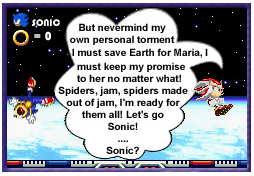 And so we go through some very disturbing imagery involving spiders and jam that seems to echo Rimmer’s “playtime” with his brothers. Seriously, what’s with insects and jam – surely they’d want something to contribute to their 5-a-day instead. And finally, we get the payoff of the entire comic. That Shadow was angsting so much over his “past” that Sonic’s rings deplete and he dies. Lovely. Small, teensy plot hole here through. Why did Shadow not die either? Surely he’d die at the same time given that rings are shared. The logic and plotting here is loose and idiotic. So kinda like a Sonic game, then.

If you thought the weak punch line means the comic is over, then you’re in for a “treat” as there’s more! You see, there’s a huge credits disclaimer that tries to be witty and pop culture focused. Short term, that’s okay. Long term, a HUGE mistake. Chances are, all those gags that were referenced that seemed popular then are stale or unknown now. It sticks the whole thing in a time lock and renders it pretty much obsolete after a few years. This kind of thing really bugs me, though thankfully not at level akin to Adamantium Rage.

So, in conclusion, what is good about this first entry of the webcomic? Well…the panels are nice. As in the actual panel frames. And the comic logo is nice too. But overall, the comic is a visual and wordy mess, the characterization random and the storylines bizarre. I had more fun constructing Cybermats out of Play-Doh. Overall, I think I can sum it up with three simple words:

…Can I still do that review of Sonic CD then? [You’re fired – Editor]

Many thanks to Sofia “I Am A Woman!” Rey for the art and Kevin “80’s Kid” Eva for letting me do this review in the first place. Enjoy Wrecks’ Birthday, and I’ll see you at the next review

Sonic Wrecks to Close Next Year