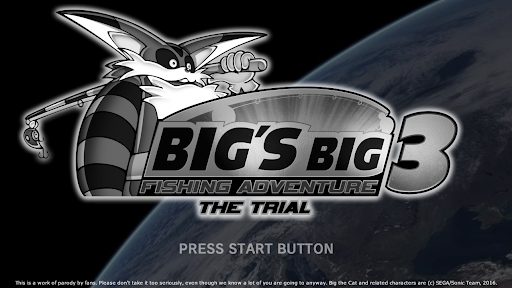 At long last, after months of anticipation, Big’s Big Fishing Adventure 3 has been released! I was one of a select few to beta test this game the day before it was released (this all was connected to other things but the collaboration I was referring to in previous articles was put on hold for now so this is somewhat unrelated), and I figured I’d review the game. So sit back, relax, and let’s get started.

Big’s Big Fishing Adventure 3 is a pretty straight forward game. The basic plot is as follows. Big and Froggy are working on their own game for SEGA, when Froggy goes missing and Big must search for him. Along the way, he runs into a couple of familiar faces and can take part in three interesting mini-games. Let me touch upon them.

In a normal run of the game, you will encounter only two of the three games. This is because your first mini-game will vary according to what you choose from the following screen:

Depending on that choice, you will either encounter a maze mini-game, or a mini-game that will remind you of a certain mobile game. The third one is the familiar “fish for Froggy” game that Big is known for, and that one is a guaranteed encounter.

The rest of the game is pretty simple. It’s cutscenes. You press the “enter” key to control them. What I mean is that you can press it while the text is scrolling to speed it up, and you can also press it when the dialogue is on full display to advance the scene. Either way, this will make up 85% of your gameplay. But the game does keep you entertained with witty dialogue as Eggman tries to convince Big how his own game is a bad idea while Sonic keeps him off Big’s back. The ending does suggest this is not the end of the story, however, but I’ll let you see what that is by playing it yourself. You can do that via the link I shared at the top of this article.

Back to the game itself, it also has an interesting soundtrack. Big’s theme from Sonic Adventure is heard in all its glory. Not only that, but it is heard in multiple remixes. The music does not take long to loop, seeing as how most of it is heard in the cutscenes, but it sets the mood nicely.

In conclusion, Big’s Big Adventure 3 has plenty to offer. However, the question is ultimately its appeal. And that is what may hold the game back from its full potential. Some fans may not prefer the light-hearted nature of this game, nor the references to previous Sonic games. This may ruin their experience altogether. Nevertheless, Big’s lazy days in paradise continue to be threatened with Froggy’s disappearances and we have no question that this is not the last time we’ll be seeing Big in action. And, judging by the ending, we may just have more in store on the horizon.