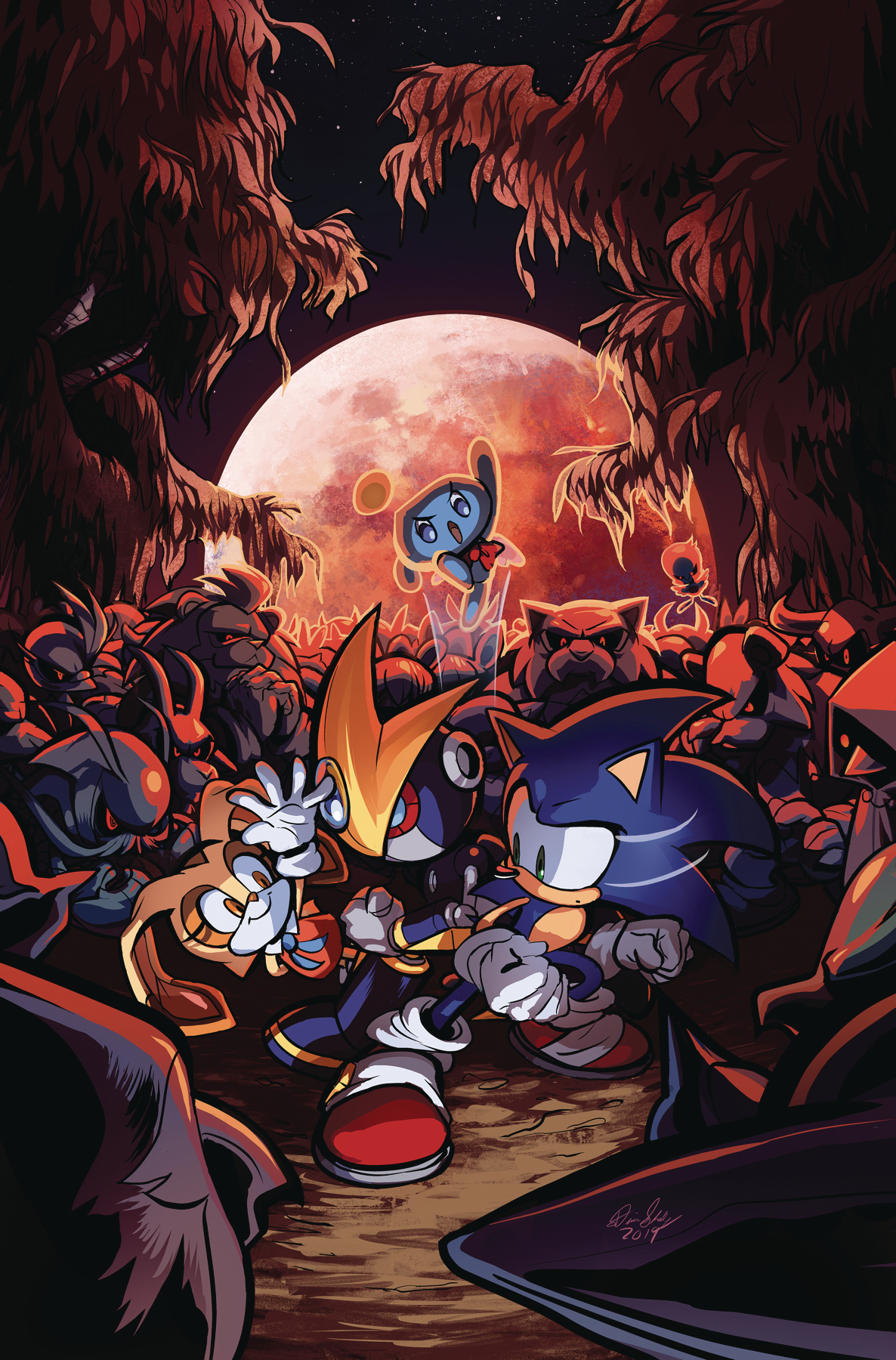 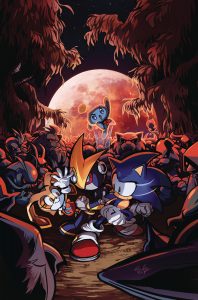 Oh boy. This one is quite the comic. Buckle up everyone, because this one is going to be a long one.

Here’s your official Spoiler Warning for the series, and issue 18. Read at your own risk!

I’ll go ahead and recap what’s been going on in this plot arc up until now. Dr. Eggman and Dr. Starline created a virus capable of turning anyone who is exposed to it, (by touch), into a robot, or Zombot, as Sonic has dubbed them. In issue 15, our hero Sonic becomes infected by the virus, though in issue 16 finds he’s able to keep it at bay by running the virus off. However, it can’t be cured by Sonic’s running. In issue 17, Team Chaotix fights off the Zombot horde and gets some of the residents in Seaside City to an escape pod. However, due to Vector promising Charmy they would come back for survivors, Charmy leaves the group to go save a woman who had been quarantined by Vector, which results in Charmy succumbing to the virus himself. Issue 18 picks up shortly after Sonic learns of Charmy’s fate.

Issue 18 starts off with Sonic running from Dr. Eggman’s flying base, heading towards a small village in which Cream and Vanilla, her mother, reside. Eggman reveals his plan to attack this village is not strategic, but purely to attack Sonic’s friend Cream. Sonic is determined not to let this happen, especially as he’s still mourning the loss of Charmy. Sonic continues running towards Cream’s village.

Meanwhile, as Dr. Eggman begins his attack on the village, Vanilla tries to keep Cream safe in their home. Cream wants to go and help the citizens of their village, but is convinced by Vanilla it’s better to stay and keep the house safe. Instead, Cream sends Gemerl out to help. He agrees, and goes out to fight.

I should probably mention that by this point, the Zombot virus has spread so far that Eggman can’t control the newest members of his Zombot army. This leads to Starline questioning his hero and whether or not he’s capable of defeating Sonic, even confiding in Orbot his concerns.

Back to the main story, Sonic arrives at Cream’s village, alerting the citizens of a shuttle headed to take them to a safe zone. He heads to Cream’s house but is stopped by Gemerl, warning Sonic that his infection is spreading rapidly and he poses more danger than safety to Cream and her family. After much back and forth between the two, Gemerl convinces Sonic to leave the house and run off the virus before saving Cream. Gemerl turns back to the horde of Zombots to attack, only to be stopped by Cream and lectured on how he treated Sonic and how he plans to deal with the infected citizens. Gemerl agrees to use non-lethal force on the infected citizens, (and apologize to Sonic for his actions when he returns).

Cream heard a cry for help from her house. She rushes to help her mother, who’s being attacked by several Zombots. Cheese and Chocola are fighting the Zombots and become infected themselves. Vanilla grabs Cream and runs away from the house, as Cream cries for them to not leave her beloved Chao friends behind. Sonic returns to the house and convinces Cream to take her mother to the shuttle, telling her to be strong and that he will make things right. Cream does as she’s asked, and Sonic sends Gemerl to ensure the two make it to the shuttle and it leaves. As Gemerl follows his instructions, Sonic catches the two infected chao, and receives a frantic call from Rouge alerting Sonic to Eggman’s next target: Sunset City. She tells him Omega and Shadow are already on their way to intervene, but they’ll likely need backup. Sonic agrees and leaves the chao under glass containers. The issue ends with the chao breaking out of their glass prisons.

For starters, I’m someone who adores darker stories. All one would need to do to confirm this is look at the books I read or the games I play. This series is incredibly dark for a Sonic the Hedgehog plot, and frankly, I love it. This arc is honestly one of my favorite comic arcs between the Archie and IDW comics. Ian Flynn consistently nails the writing in the comics, ensuring you’re completely wrapped in the story. When something happens to a character, you feel sad or happy for them. I felt genuinely upset when Cheese and Chocola became Zombots. I’m always worried about Sonic and whether or not he’s going to be able to outrun his inevitable Zombot doom. I’m an avid reader, and it takes a lot to keep me interested in a story, and Flynn is able to do so. That’s a mark do an incredible writer. I am never disappointed when I read what he’s written.

Further complimenting the writing is the art in these comics. Tracey Yardley worked on the art for this issue, and the issue was colored by Leonardo Ito. As an artist myself, I love seeing how people depict the characters near and dear to my heart. I’m always excited to see what art the IDW comics have in store. One aspect of art that not many people realize is as difficult as it is would be facial expressions. This is an area I’ve personally struggled with in my own art, and to see how Yardley is able to depict the feelings of each character is amazing. A solid example of this would be any panel on pages 15 and 16. The art in these pages shows intense expressions as Vanilla fears for her life, or Cream watches her two chao sacrifice themselves to save her and her mother. I love the art in these comics.

I thoroughly enjoyed Issue 18. It was a great follow up to 17, and continues the Zombot Arc nicely. I really have no complaints about this comic. I’m very excited to see what happens in issue 19, when Team Dark is introduced. Personally, I’m predicting Sonic beginning to be unable to outrun his infection and him becoming a Zombot, and that being the catalyst for a cure being found. Or, Shadow gets infected, and if that happens I’m going to be upset because he’s my favorite. Either way, I look forward to the continuation of this arc.

This review was originally written by the author for TSSZ News.