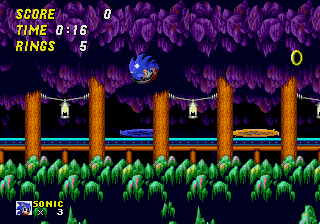 Another entry spotlight shines on another Sonic Hacking Contest 2015 entry as our coverage of the contest continues. In this article the spotlight lights up Portal Gun In Sonic 2 by snkenjoi!

The portals in the game actually affect objects other than sonic – to the extent that you can kill an enemy with its own projectile if you fling it back at it.

I attempted to recreate the portal gun as best I could, but it turns out the sonic engine isn’t a huge fan of warping. You can probably break the game in many unimaginable ways, but I think I covered all the major issues.

Many thanks to E-122-Psi who agreed to build this fantastic spritesheet.