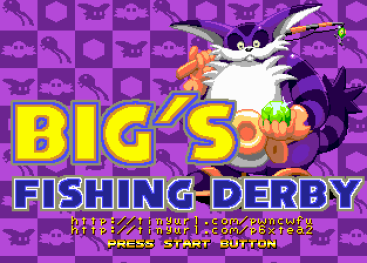 Our Sonic Hacking Contest 2015 coverage continues with the spotlight shining on another contest entry. This time it’s a hack that may be familiar to those who followed last year’s content. This year it returns with a big update. Big’s Fishing Derby by flamewing!

* 14 brand new levels, and many old ones improved!

* many new multiplayer options: play random levels, or play them in sequence, or play a ‘best X out of Y’ game.

* rebalanced power up probabilities, and a brand new shield power up.

A historical note: since last contest, I became aware that this hack has been widely claimed to be a hack of Sonic 1 (even on Retro’s own Wiki, which has been fixed). This is incorrect: it was based on Sonic Classic Heroes, which was based on Sonic 2. If in this day and age you insist on distributing IPS patches (I have seen it done), at least patch the correct game: Sonic Classic Heroes. Or, if you must, Sonic 2.

If you like this hack, please vote for it. But not for the Big trophy, unless you really think this is the worst hack overall.