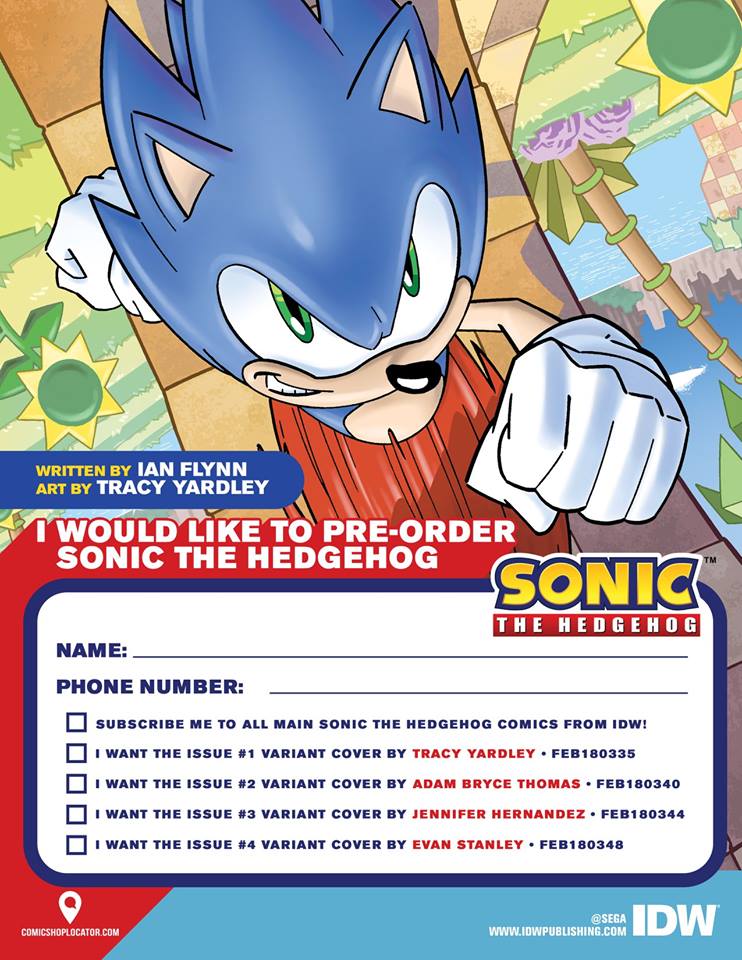 It has been a Sonic IDW bombardment of news so far this year. And yet, we still don’t know exactly what the lore of IDW Sonic will be like. Currently, Ian Flynn’s BumbleKast series has been our best insight into the lore of IDW Sonic. The latest episode gave us some more tidbits on the comics:

– Ian doesn’t have a limit on story arcs this time. He said to treat the first year as one big arc.

-The term “Mobian” or any similar term is not allowed to be used. Any “Mobile” that’s allowed is the Eggmobile.

-Besides Rough, Tumble, and Tangle, there’s one more heroic character that hasn’t been hinted at all yet, as well as something to do with the end of the arc that will mostly be explored in Year Two, but he doesn’t count it due to not getting there yet. Aside from that, not many new characters.

It’s another sign that the lore of Archie Sonic is being almost abandoned, if not entirely. Pre-orders have also started, but if you think it’s similar to the Archie Sonic method…well it’s not. Here’s what the IDW Sonic Facebook page says you can do:

IDW does not have a subscription service, I’m afraid. But there are ways to get your Sonic comics! The first thing is to go to your local comic shop and pre-order the issues. By pre-ordering, it guarantees you’ll have the issue waiting for you in-store the day it is released! Check out the cool graphic here for info on ordering from your local comic shop and go to comicshoplocator.com/storelocator. And I’m not entirely sure all the countries where the comics will be available, I’m afraid. Definitely the U.S., U.K. and Canada, but I’m unfortunately just not sure of other places. 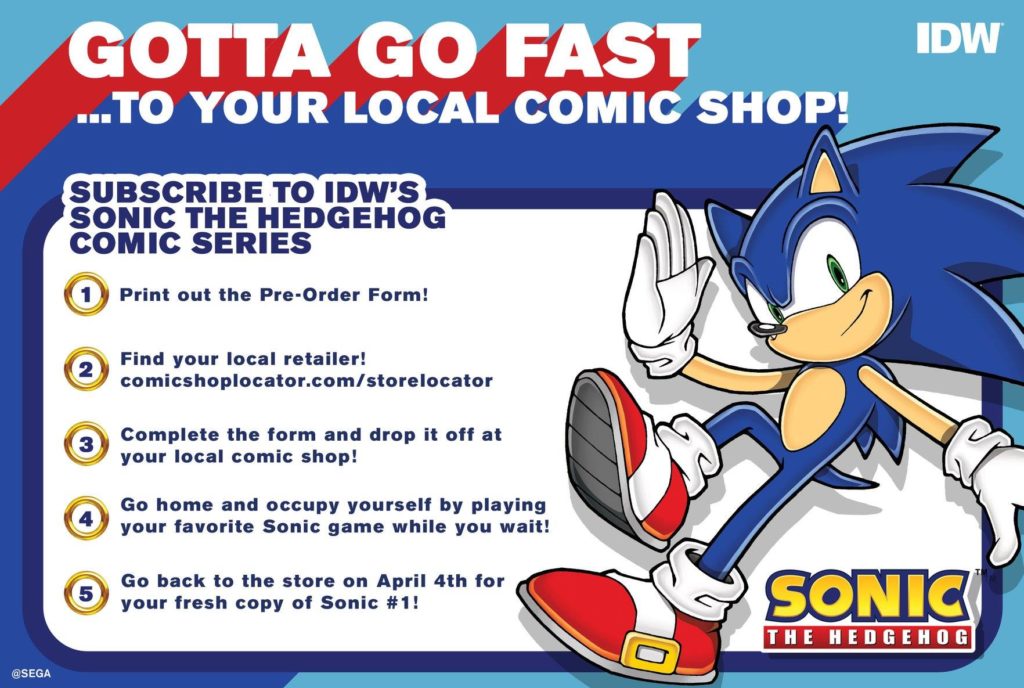 Don’t worry, if you forget it, the shop will still let you pre-order. Plus, while you’re there, look around! Ask questions! A good comics shop will help you!

I know, having grown up in rural Arizona and having the closest shop 2 hours away, that not everyone has a “local” comic shop. If that is the case for you, don’t fret! There are still plenty of options!

1. Check for comic shops online! Some of the larger stores (like Midtown Comics) even allow you to preorder from their website. And some folks have shared online shops where you can even set a subscription!

2. If you want to wait for the collected edition, you can pre-order that now online or through your local bookstore.

3. If digital sounds better to you, you can preorder now through Comixology and subscribe to the series!

4. if no other option works for you, you can order the issue from the IDW website when it comes out. But, I will say, our supply tends to be limited and you won’t be able to read it the day it comes out (unless you get it digitally from us).

There were also remarks about the creators. Matt Herms is back:

Just as a reminder, the series is being written by Ian Flynn! And the first 4 issues feature art by the likes of Tracy Yardley!, Adam Bryce Thomas, Jennifer Hernandez, and Evan Stanley! Plus covers by them and people like Tyson Hesse, Kieran Gates, Nathalie Fourdraine, Jonathan Gray, Rafa Knight, and Jamal Peppers. And Matt Herms is back coloring too!

We also learned a little about SEGA’s restrictions:

Sega has been a wonderful partner. There are certainly some restrictions on what we can do with Sonic (spoiler alert: he will not be red or wearing pants in the comics!), but there’s also a lot of creative freedom. It’s part of the great thing about a fresh start. Yes, we have an idea of who Sonic is, but since this is a new version of him there’s definitely a lot of room for growth.

About merchandising and “seeing certain characters coming back soon”:

There could be, but that’s above my pay grade, I’m afraid! Most merchandising decisions come from Sega and our agreement is to do comics. There will likely be the occasional promotional giveaway (like the New York Comic Con flyers you may have seen), but I can’t speak to merch beyond that.

Ya got me. I went through an entire thread without mentioning Big the Cat! I’m sure he’s around somewhere…

We learned that IDW Sonic will be its own separate universe:

It is certainly inspired by some of the games and the long history of Sonic, but is it’s own separate universe!

On whether the IDW Sonic story will have “a deep lore or a serious story, a more lighthearted romp”:

I mean, the answer is kind of all of the above. There’s serious beats, there’s humor, the world clearly existed before the comics and we’ll reference some events from before what we started, but it’s still accessible to someone who barely knows who Sonic is. And if I say much more, we’re in spoiler territory.