It has been a while since we last heard news on the status of the UK premiere of Sonic Boom on television.  However we have learned of one channel that isn’t a candidate to broadcast it there.

A user on the SEGA forums, SonicsBiggestFan, sent in an email to Cartoon Network UK to find out when Sonic Boom will begin airing. After getting a response saying they will get back to them later once they have gotten more information they did just that.

The answer? The UK branch of Cartoon Network “currently has no plans showing Sonic Boom in the UK”, according to the SonicsBiggestFan‘s screenshot of the email: 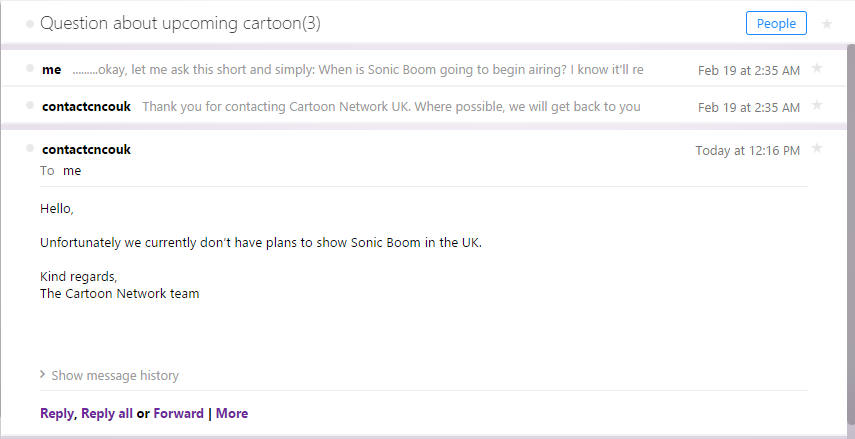 So what does this mean? It seems Cartoon Network’s rights to broadcast Sonic Boom are probably restricted to only the United States.. In fact the show’s broadcasting rights may likely be involved with someone else entirely. This doesn’t mean that the cartoon will not be airing in the UK. The cartoon is supposed to begin airing in other regions of Europe as early as this autumn.

More news should come in the near future. But one thing is for certain: do not count out the UK on airing Sonic Boom for now.