You may recall Bentley Jones and his Finally Free album, an album which if you ask me or Sonic Yoda of SEGA Driven we will forcably insist it is one of the best things we’ve heard this year. Considering we’re half way through Decemeber that probably means it IS good. Seriously, have you heard Down In Tokyo?

Anyway whilst the album, which includes the ballad version of the Sonic & SEGA All-Stars Racing vocal theme is primarily a digital one through the likes of iTunes, Napster, etc one of the options you may recall was the purchase of a limited edition CD pack. This was not a normal cd single format unlike the aforementioned SASAR mini-album, but was actually a limited edition signed master reference CD-R accompanied by a signed print. Ours arrived a week or so back and we thought you might like to actually see it. 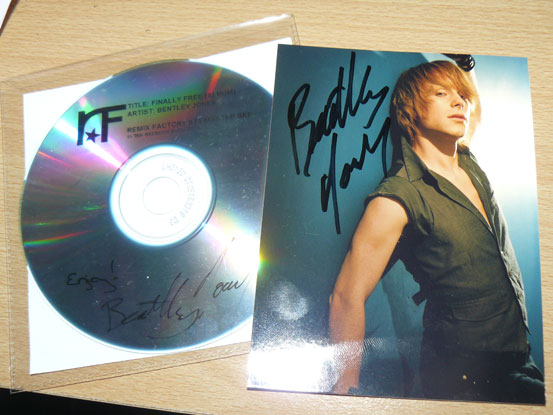 The cd which has the songs in Redbook Audio formatting is an audio CD-R “hot out the studio”, normally only used by technicians, engineers etc. So pretty rare. As you can see its all printed up with the Remix Factor logo and things. Which is kinda nice. It does appear to have been signed by a “Beattliy Toad” whoever the hell that is. The signed photo, though not my thing, mysterious disappeared after this shot, taken by a mysterious female-shaped blur moving like greased lightning and leaving only the sound of some giggling and distant sighing in its wake. Echo tells me she’s looked high and low and can’t find it anywhere.