Home Articles VR vs. VR vs. The New Sensation 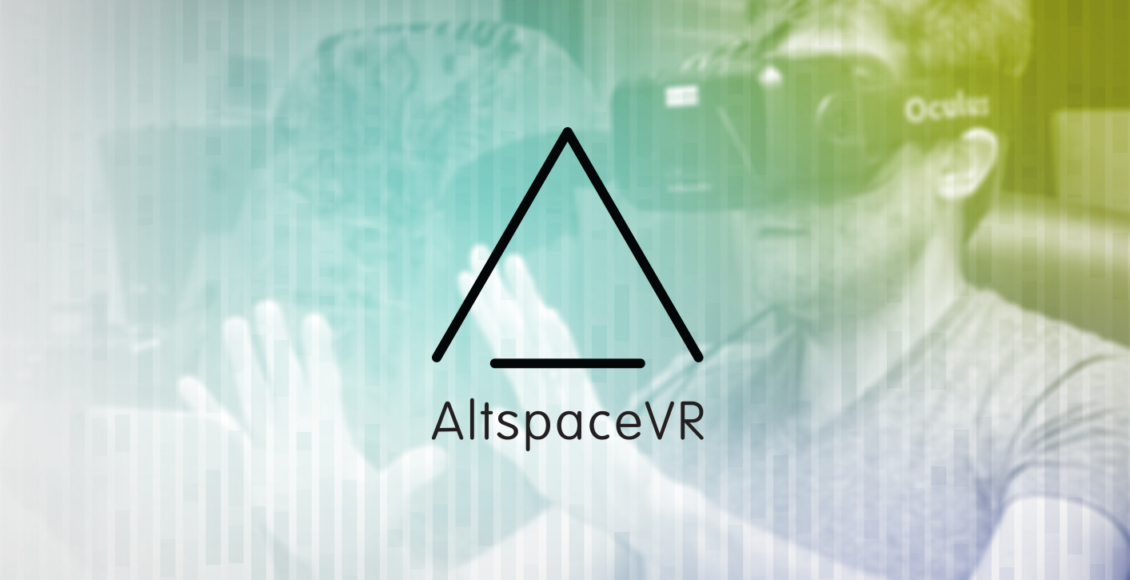 So. Here we are again. It seems we can’t get through one week without the need to address something or the other that’s happened in the world of virtual reality (VR). Some scandal or disaster or so forth that in reality is less Kilimanjaro and more Standardmolehillo. However, since I am on holiday for most of this week and the next, finally cashing in a chunk of my acquired lieu time and am looking to explore among other things a rumoured concept called “sleep”. Added to that this week’s column was decided to be required reading at a relatively late time, this will be, if you will forgive me, somewhat briefer than I otherwise would have liked.

So here we go with the first in a possible series of relatively quickfire opinions on some recent items. 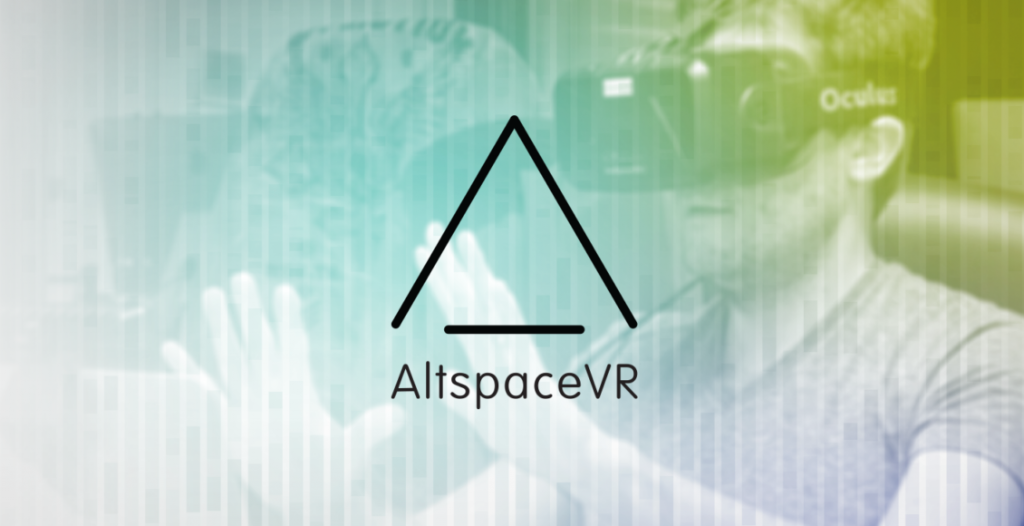 The big story of the last week or so, ignoring the HTC standalone news, was the announcement at the end of last week from AltSpaceVR that due to a cashflow crisis they sadly could no longer afford “to keep the virtual lights on”.  Of course, this is a terrible shame for the hardworking AltSpaceVR team who have been one of the trailblazers of social and non-gaming VR. Unfortunately, as is often the case, business doesn’t care whether or not you were first and these things can happen. You can argue that AltSpaceVR’s role has in many ways been replaced by the likes of Facebook Spaces in many people’s minds, but the service had a very dedicated audience of users, continued to have a number of firsts for VR and had only just come off a deal with ESPN of all places that could’ve been a great door-opener for them. (Learn more about that in last Saturday’s edition of This Week In VR Sport, by the way.)

But is it, as oh so many publications debated in the follow-up, the beginning of THE END OF VR?

Urgh. Sorry, but I’m at the point now where if my eyes rolled any more on seeing these they’d be hired as dice in Las Vegas. If we ever do an article in response to such an event asking “Is This The End Of VR?” I fervently hope it is just the title followed by a one line answer of “Of course it f****** isn’t. Don’t be stupid.” No, AltSpace going down – whether or not Palmer Luckey will act on his Twitter poll where he mused over marching in to save it* – isn’t a sign of the beginning of the end.  Put away your sandwich boards and tin foil hats people. Even if one of the other head mounted display (HMD) creators pulled out of VR tomorrow it wouldn’t be the end

Do I need to whip out your favourite image out again? Yup, I probably do. 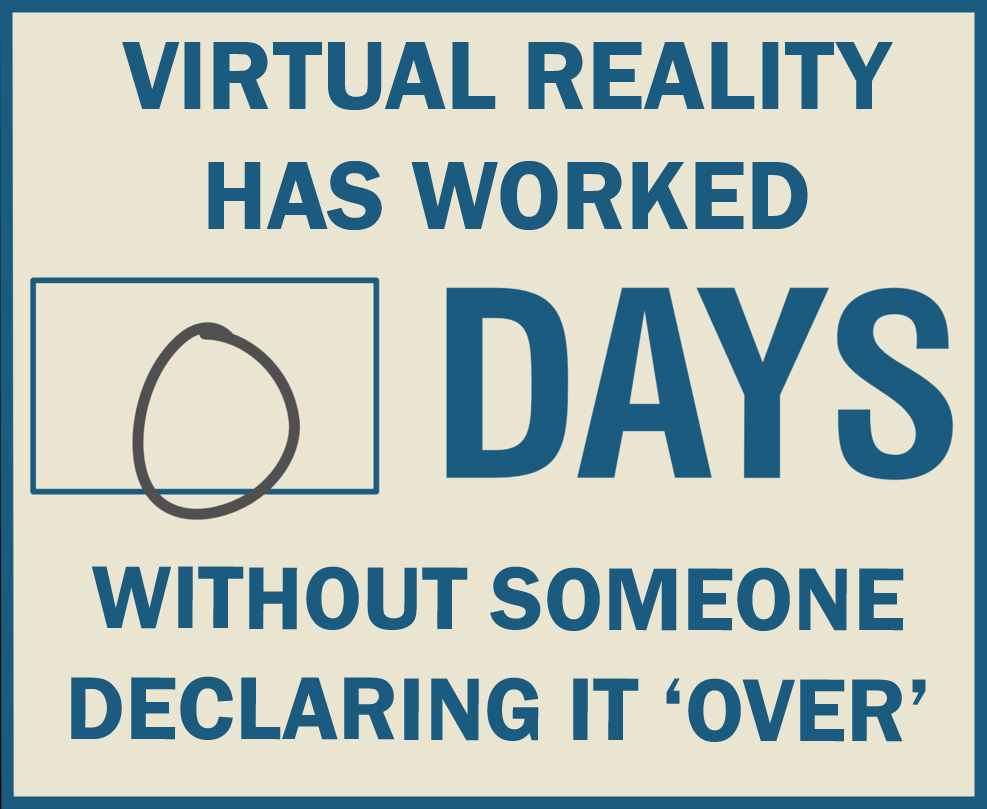 *Incidentally regarding that poll: Doesn’t that come across – inadvertently I readily admit – as a little bit toying with people’s fate? The addition of a (thoroughly sensible) ‘it might not be possible regardless’ caveat or not; when everyone knows you have the power to do so putting the future of people’s livelihoods to a Twitter poll doesn’t exactly feel right.  If you’re interested in saving it, and there’s a sound business reason upon looking at the books to do so, then obviously please do. Social media is a great thing but there’s a danger of false hope in this instance.

Unfortunately, and brutally, that’s just business. What about all the little AR creation service that have been around for years likely feeling the pinch now ARKit has come out and Apple is stealing their thunder? If they go under will that mean THE END OF AUGMENTED REALITY? No. If a film flops at the box office it doesn’t mean it’s the end of the cinema. If a book fails to become a New York Times bestseller it doesn’t mean we should all give up on that silly ‘reading’ thing. Pfft. What’s it ever done for us anyway?

How often have videogame fans, myself included, mourned the loss of a great and talented studio owing to mismanagement by its ultimate owner or the failure of a singular game? Heck, even having a successful one doesn’t mean a studio is safe in today’s climate.  Many have fallen, more will do so in the future, others will rise to take their place. That’s the way of things and I don’t recall, other than the collapse of Atari, any other time a game business went under that anyone anywhere asked if this was the end of video games.

Which of course it is. It’s all over people. We’d best get back to learning how to play the harpsichord or how to crochet or something to pass the time. I wonder if you can turn knitting a jumper into an eSport? Maybe hemming a dress? Intel: Call me. Let’s set up a Sewing Bee Challenge League.

All the best for the AltSpaceVR team. I sincerely hope you all find yourselves on your feet again soon.  Your hard work and contributions to the early days of this generation will not be forgotten.

GETTING AWAY FROM IT ALL | Firewatch #1