Home Articles VR vs. VR vs. The Darkness – A CES Story 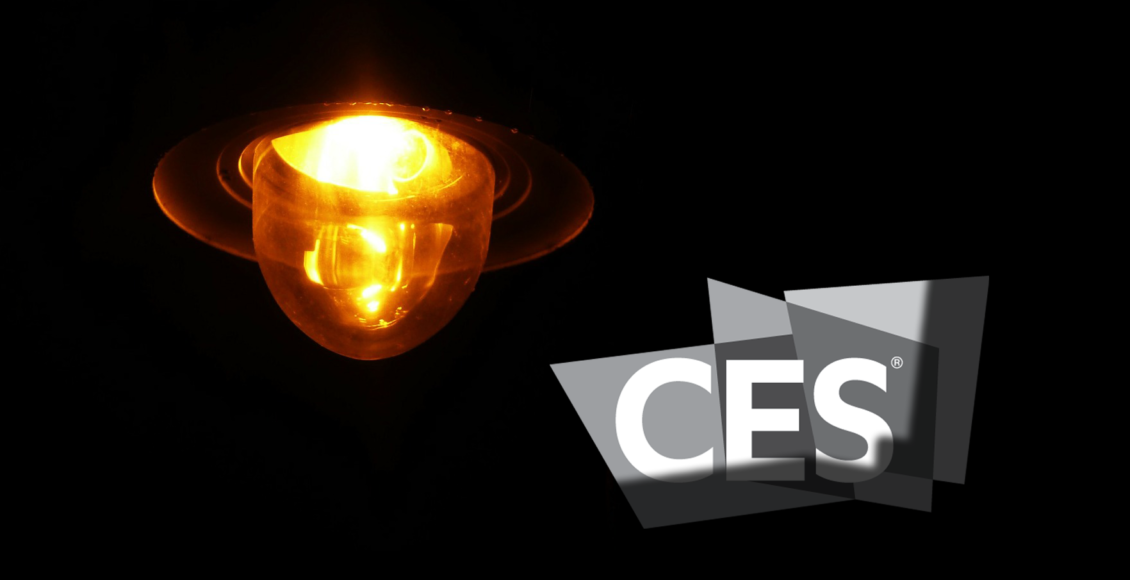 Everything was fine. People sat, stood, worked alone and in groups, thought reflectively on what they’d seen or talked in excited terms about what they were going to. Was it going to be good? Was it going to be bad? What exactly were they going to say about it? For the VRFocus team out in the US it was pretty much the same for all the other attendees at this year’s International Consumer Electronics Show (CES) in Las Vegas. There was the usual problems. Get to your meetings on time. How on earth do I get an Uber in this mess?

Then things started flickering, like an omen of nothing but bad times in a Hollywood thriller the power blipped briefly then went down.

For me, sole survivor of #TeamLeftBehind after poor Rebecca finally gave in to the illness that had bothered her since well before our Maltese trip there didn’t seem much of a fuss to me initially. As anyone who has hosted or organised events, particularly big events will tell you, no matter how well you organise it whatever can go wrong will go wrong. Murphy’s law is a regular attendee of conventions around the world. The trick is to affectively (and effectively) roll with the punches.

A minor blip, a power surge perhaps. Lightning struck a generator or a substation or something, I mused from back in the UK. Dismissing things and getting back on with my work. They have backup generators, contingencies for this sort of thing. I mused as a slight note of panic began to creep into the messages. Unfortunately, as the people who are left behind during events will tell you, when you’ve been working long long hours and there’s an inconvenience over wherever it is everyone else is, by day three your sympathy for such incidents is pretty much zero.

However, the power stayed off.
The drama had begun!

I have, to my knowledge never written a ‘bonus’ VR vs. for VRFocus before, but I thought it would be a good thing, considering all that happened that evening if we didn’t keep for posterity some of the fun that was had during that short time period. And fun we did have – well I did certainly, at the helm of the VRFocus Twitter account. The most fun I’d had (not) at one of these events in years.

Things began when it became clear that the power was not coming back anytime soon. Back in the UK I started laughing, well, you had to didn’t you really? Here they were in the City of Lights and all the lights had gone out. I started joking that next year somebody would come on stage and announce a revolutionary new design: 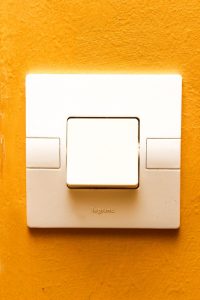 As technologies go, I think that one is gonna be a corker. As panic began to set in, and when it also became obvious whatever we talked about until this was over was kind of irrelevant to what was going on live. I set about keeping the Twitter audience informed on just what was going on and offered a suggestion how things could be salvaged.

CES BREAKING: There’s no WiFi in the press room and no power . The power has turned off in the north hall.

Someone put a coin in the meter or something over there would you?

Kevin J was back at the hotel, however the maid had ushered him from the room and he wasn’t able to sort out anything. Peter and Nina on the other hand were in the press room where it had already been dark for a uncomfortably long time.

“There’s no WiFi in the press room and no power. The power has turned off in the north hall.” Nina confirmed via Skype.

“What?” Was Kevin J’s reply. “Great.” And he was right this really wasn’t the best of times for us for this to happen. I did however get my first response.

Wait, does this mean CES is now #BROKEN or #WOKEN? Will we ever know? Probably not.

“Pete has no power on his laptop. Apparently it’s gonna start up soon.” Nina confirmed to us, but time passed quickly. We’d also heard not a heck of a lot from Pete

“Yup.” Came his response from the beyond, “Wrote the headline for my Noveto hands on then RIP. Power’s fluctuating all over CES.” It was with a heavy heart I informed Twitter of our loss.

Nina again: “Guys central hall has completely shut down… Everything is on battery and is going to die in 10 min ”

She sent us a candid shot of the press room, all confused. Just as I found a CNBC tweet of them broadcasting footage of the power going out and people looking unsure as to what exactly they were supposed to do next.

Thankfully VRFocus is a fan of older technologies as well, and as tech goes this one is pretty retro. 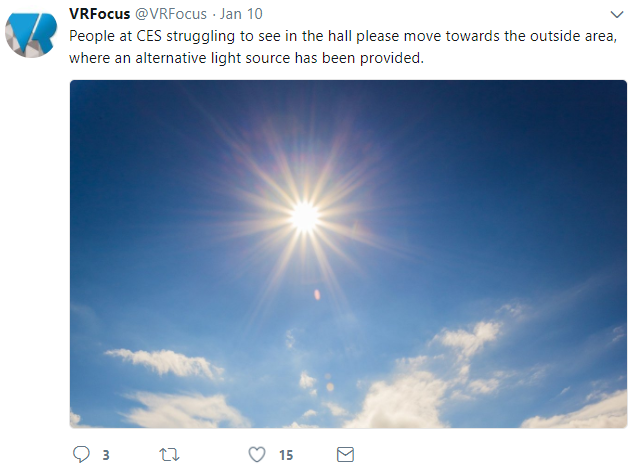 Some did have some issues with this revolutionary new tech paradigm that was now on display.

See you're too close. Take a couple of million steps back.

And working on the Metal Gear theme… 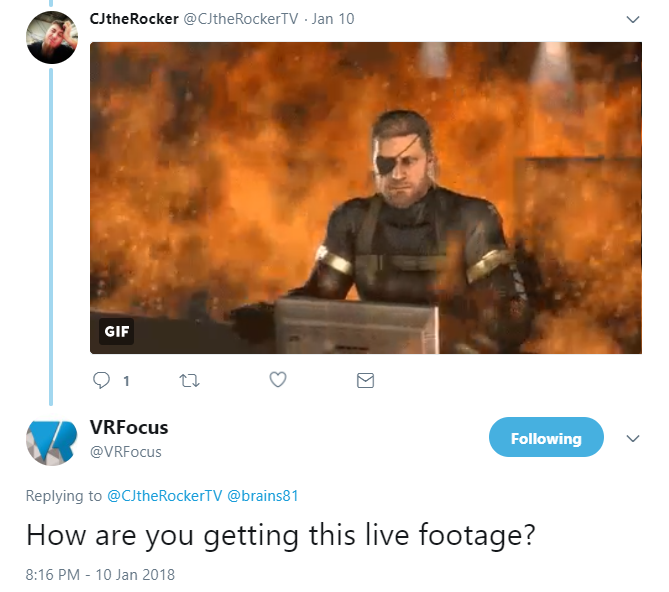 But others agreed that the new reveal was going to change everything.

We're mighty impressed at the visual quality of this new wireless "sun" on display. There's no screendoor effect at all present. Official hands-on coming soon.

I'm hearing this might be an additional surprise release. Lots of rumours on Reddit over at /r/moon.

Some people were still reading what we’d written at least. Though one reader’s eyes were playing tricks on them with our Arizona Sunshine article.

Another update from Nina had grave news. “I’m gonna be down too soon. Phone battery dying too.” 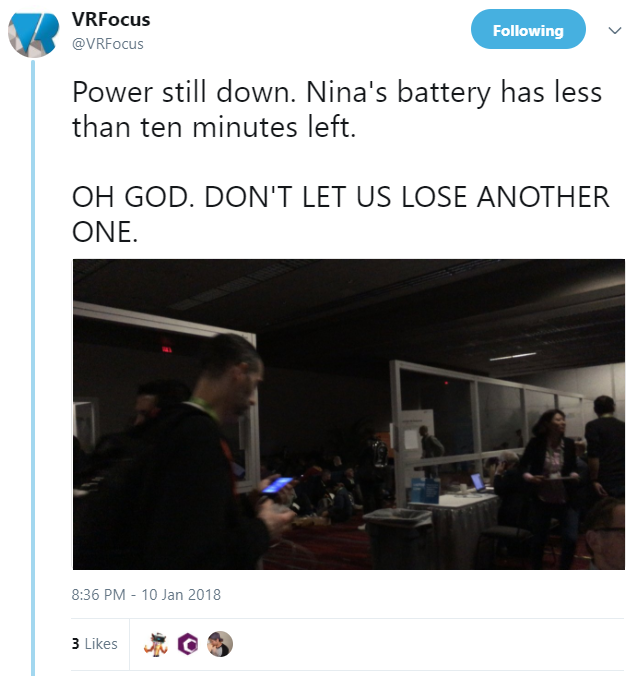 And barely a few minutes later she was lost to us as well. 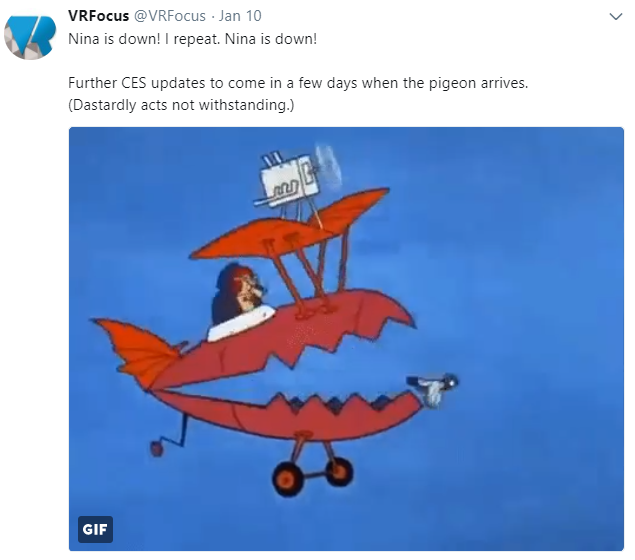 Being a forthright sort of fellow I then decided to knuckle down and get planning straight away for next year.

Prepping the team for #CES2019. pic.twitter.com/nmnAzhVj0i

Ultimately though, all good(?) things must come to an end.

THE POWER IS BACK ON. CHARGE ALL THE THINGS! pic.twitter.com/07WNIXr6rp

There were still questions to ask, of course, in all of this. Like whose fault was it in the first place?

Google had to close their booth the other day because it rained and their booth wasn't waterproof.

(No word on whether it was shockproof, but it is very difficult to drop a booth to test it I guess.)

Whatever the case, the power came back on and everyone was reunited with their wi-fi connections bringing to an end this little CES story.

And they all worked tiredly ever after…

Get Ready for Out of Ammo on PSVR