Home Articles VR vs. VR Vs. The Carmack Takeaways (Part One) 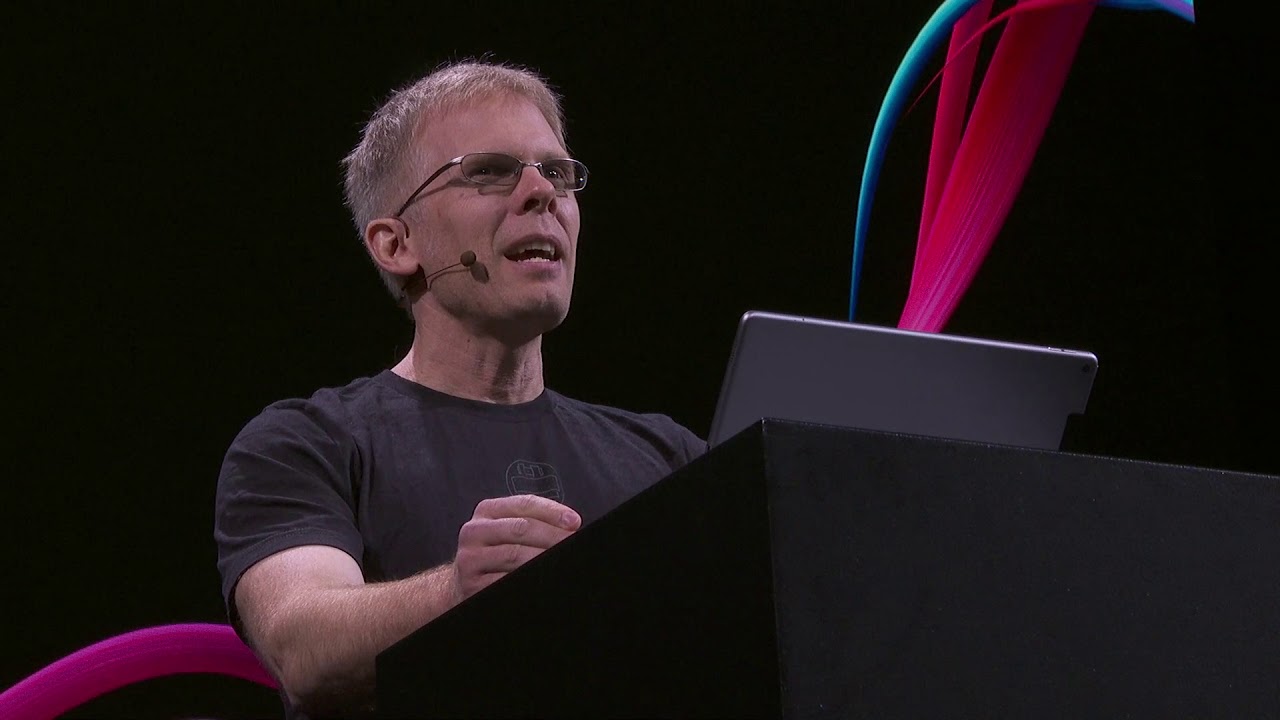 Well that’s another Oculus Connect done and with the surprise announcement that there’s not going to be a PlayStation Experience in 2018 and with EGX and Tokyo Game Show also done and dusted we are officially out of major tier level events with the exception of Paris Games Week but I know some people are on the fence as to its importance.

Oh, there are still actual events going on between now and December. There’s GTC Europe starting today for instance. VR Days and XRDC before the end of the month as well. VRX 2018 hits in December and there’s a few other ones here and there around the globe. But for the big hitters that is apparently, that’s, err… that. Next stop CES 2019, I guess?

As usual there was lots to talk about during the event, especially the announcements relating to the former-Santa Cruz, the Oculus Quest. I guess I won’t be able to make jokes relating to The Thrills’ song any more. On the plus side, jokes about The Real Adventures of Oculus Quest are now very much in.

For this year’s post Oculus Connect VR vs. I thought I’d focus on one particular part of Oculus Connect 5 (OC5). At least initially. Maybe I’ll go back and re-watch some more at a later date to see how I feel about things. I definitely need to re-watch Michael Abrash’s section because I missed a rather big chunk of it – and as regular readers will know I’m an unabashed Abrash fan. (I found out on day two Peter is not, and he is now officially dead to me.)  Instead, I thought I’d go through the 2018 edition of Oculus Chief Technical Officer John Carmack‘s “Unscripted” keynote and point out some things I took away from the whole thing. Because despite issues getting to watch it – which we’ll get into – there were some things that leapt out during the session. Some important, some not so important.

This’ll actually end up being a two-parter, since 90 minutes of John Carmack is a lot to digest.  For this week let’s start with some general items as well as the first 45 minutes of the 90.

What Is It With Facebook And Not Being Able To Stream Video Properly?

Before we begin let’s start with something that plagued both keynotes for those of us stuck watching on Facebook: the lag and coverage drops. This really is inexcusable for what is a Facebook run event. Video is so problematic for Facebook yet is also a key pillar of their business direction. If you’re going to insist on making us use Facebook (and having to immediately turn on Quiet Mode to get rid of the silly emoji clutter) can it at least be stable? At some points in the stream you could tell the audio and visuals were slightly out of sync and frankly Facebook, compared to other events that deal with far bigger numbers you guys really should have this down pat by now, but I’ve yet to see a livestream without issues.

The Carmack stream died for me again, judging by the subtitles apparently at the point his teeth started chattering. pic.twitter.com/ArVmYgxzAO

Long-Term Goals Are Fine, But If You Suck You Suck

One of the things people tend to not like about me is I am pretty honest about things when they fail. Today’s mistake is tomorrow’s disaster. It’s like you presenting the murderer in Cluedo with the gift of a new candlestick and being surprised they kill again. Ill-conceived ideas shouldn’t be given a pass just ‘because’, especially if the evidence says otherwise.  Hard honesty is not ‘being negative’.

Whilst we all know that Carmack is the counterpoint to Day One it was very interesting for him to directly address that fact.

“It’s not that [long-term planning] isn’t important.” He insisted, stifling a chuckle. “A lot of people find a lot of great motivation from it, and some things do need long-term commitment – I am really happy that Facebook does have this long-term commitment to research and development of new technology. But, in some ways a ‘long-term vision’ can be a carpet you sweep your current shortcomings under.”

Oculus Go Might Not Entirely Please Him, But How Well It Has Done Pleases Everyone

“I was probably the most optimistic inside Oculus about how well Go would do, but it turned out that it exceeded even my expectations.”

One thing I do agree with VR naysayers about is a lack of clarity as to sales figures of VR head-mounted displays (HMDs).  We didn’t get any figures here either, but with the ‘hard honesty’ full on displayed (Carmack did acknowledge having issues with certain aspects of Go’s software) both Oculus and Carmack bigged up how well the HMD had done. To the point where they acknowledged the response had actually surprised them.  That bodes particularly well.

Oculus don’t know why Go is as retentive as Rift.  They don’t know how many people can’t deal with 3DOF tracking – “but we know they exist”.  They don’t know what exactly is going to be the ‘magic’ element that brings people to the Oculus Quest. There were admissions of Oculus not knowing all manner of things on Day One as well. I’ll be honest, I’m not sure whether  I’m concerned or unconcerned about that.

Last year Carmack, on several occasions held Samsung up the way things should be done. This year they didn’t fare as well, despite being “by far the most successful VR headset” according to Carmack. Carmack this time noted how the Gear VR despite giving a pleasing performance doesn’t persist as an interest point to buyers.

Okay, It’s Good For Something

It turns out Carmack isn’t too enamoured of the Go’s strap and that Oculus didn’t get what they were aiming for. But there is another option, apparently.

“You can actually take a Gear VR strap and with a little bit of scissor work on it get it to fit inside a Go and have the conventional one backstrap.” The facial interface for the Go wasn’t to Carmack’s satisfaction either so he took a pair of scissors to that too.

“Have we suddenly gone into an episode of Blue Peter?” I asked the VRFocus team, wondering how a Fairy liquid bottle and sticky back plastic was going to factor into things.

A solution, albeit a limited one, is coming to Go. Licencing is an issue as is power AND drive formats, but that’s something I’ve seen people asking for a while and was last addressed by Carmack way back in March .It’s clearly problematic for the team at Oculus but good to see they’re going to make it happen somehow despite all that.

Oculus Straight Up Admitted To Taking Design Ideas From Google

When I managed to wrangle Facebook’s video into showing me OC5 again I came back into something that made me do a massive double-take.

“We did come around to basically doing what Daydream does with recentering. I think they made the right call in retrospect. Where the recenter operation, by default, recenters not just your controller but also your view unless the application explicitly opts out. We had long debates about this, but I think that is the right call in the end.” Said Carmack before plunging straight on. “And there’s a couple of little other things that we’ve cribbed from Daydream. I added the little thumbprint on the controller that they do- every time I take a hint from them I try and do it a little bit better.”

“I managed to get the video working again to find Carmack admitting they’ve been nicking design ideas from Google?”

Often it’s left unsaid that company A is inspired by, or just plain clones choice B from rival C. It’s unsaid because, well, designs are rather by default copyrighted. So, for Carmack to out-and-out admit they’d taken cues from the Google Daydream was surprising. I mean, can you imagine if Oculus were sued for copyright infringement? …Again?*  If I were Google I’d probably begin looking at forthcoming UI updates and other things a lot closer after that.

(* Incidentally we must be due our next batch of updates soon on that whole debacle with Zenimax, surely?)

“You know, I chuckle whenever our promotional stuff where we have people-atheletic people- swinging around wildly and ducking and bending with VR where that’s not going to be the reality of the way people are going to be using this product most of the time.” Carmack said with a smile. “Making company specific decisions around your development, around that, might not be wisest thing.”

They’re not the only ones. You’ve all seen this Vive picture, right? I wonder if Carmack has. 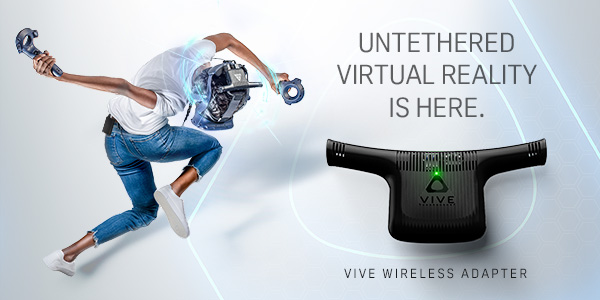 There was a lot of discussion about Quest’s intention of being 80% games vs 20% media in its usage, as opposed to Rift which is currently the reverse. Carmack, quite rightly in my opinion, disagrees that media will be so low. He then pointed out that there was a recent study which showed that media use trumped videogames “even on games consoles”.

I mean… Hasn’t that always been the case since last generation and DVD player support? How on Earth has he only just heard this?

Unfortunately, Carmack ran out of time and had to stop very abruptly indeed. It made me wonder what happened to his countdown clock he had last year in front of the stage that gave him a constant indication of how long he had so he could prioritise and wrap things up.

It felt like a mistake to (apparently) not have that this year. If there was a clock going on his tablet the evidence suggests that went by the wayside quickly.

Lots to digest as usual in that keynote. More soon on it no doubt. pic.twitter.com/sFZOYC3tXr

We’ll leave it there for part one, I’ll come back to the second 45 minutes in the next column or one after that. For now though, have a good rest of the week.