Home Articles VR vs. VR vs. Some Very Stern Words 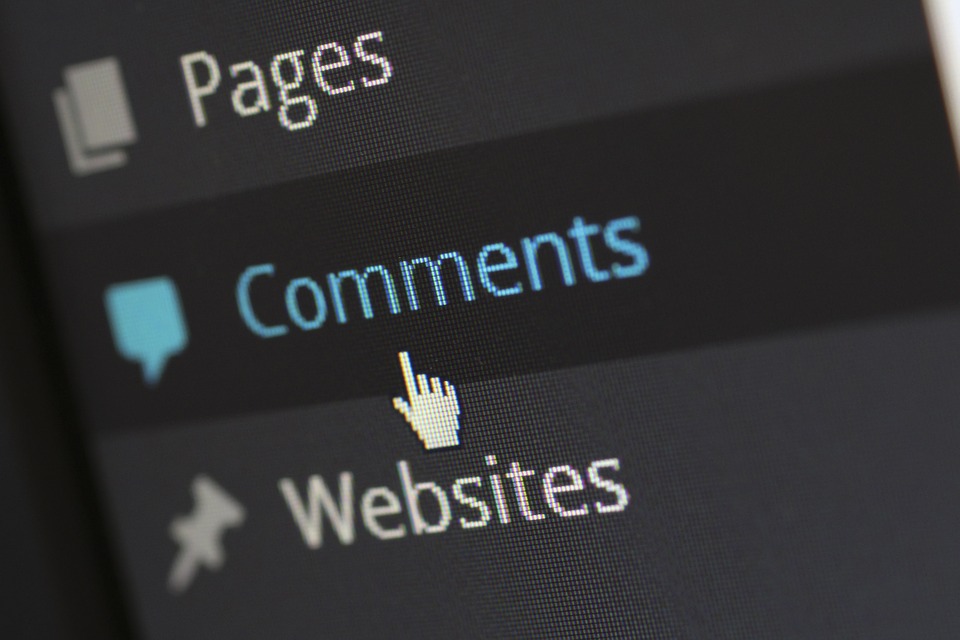 It’s odd what some people get bent out of shape about. Spending your career (I think I can call it that at this point) in an online role means you see plenty of it – and if you’re involved in social media you’re going to see a heck of a lot of it.  You’re also going to get a lot of it too. Over the last decade or so I sort of fell into social media as it rose to be a marketing tool and I’ve had all sorts slung at me down the years. Threats, abuse, slightly too interested in my personal life girls (and guys), people ringing up the office to ask the legal team personal questions about me. The works. So, if you’re gonna call me an idiot just know that, well, I’ve had worse. In fact, I’ve said worse about me myself, so, there you go. 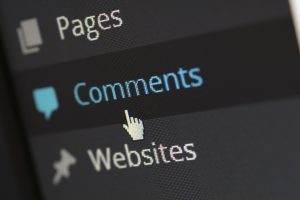 Recently there was an interesting two and eight in the comments about a post where a virtual reality (VR) video game was announced and someone was very angry it was listed on the ‘PSVR feed’ when it was not a PlayStation VR title. The reason why it was tagged as PlayStation VR was because the developers expressly said they had plans to bring the title to Sony’s headset. News about PSVR? That’ll be tagged PSVR then. Except, they insisted, that was news “not relevant” to PlayStation VR at all. Any title could come to PlayStation VR, so we shouldn’t tag that. It was an interesting argument, one I couldn’t understand for the life of me. The developers expressly mentioned Sony’s headset but it isn’t news about it? Huh?

In the end I apparently failed to explain to their satisfaction that, well, 1 = 1 and we’ll obviously tag a story with whatever it is about. Instead I was a jackass who didn’t know what they were talking about and I should take my “condescending attitude” and “shove it up your Mod ass”. Rather un-phased by the whole thing I just responded that “my ass is glorious and majestic. Thank you for noticing.”

All of this got me to thinking about another set of comments we once got on the site. Which had me heading over to YouTube to ‘relive’ what is quite possibly the most epic and, frankly, unhinged rant a channel I’ve had a hand in has ever received.

Now, YouTube is as YouTube does at this point – am I right? Being a channel owner on YouTube is like spinning the wheel on Wheel of Fortune. Who knows, you may have a big hit. At the same time the way YouTube is setup and ever changing its own rules you know there’s the chance all your had work will ultimately be for naught and your channel lost to the ages. It’s felt for a while that YouTube’s ‘Wheel of Fortune’ has been adding more and more ‘bankrupt’ sections as the years roll on. It has also been on a bit of a redesign kick in recent months and a Beta of YouTube Studio is waiting in the wings to fundamentally change the back-end experience for YouTube channels. To that end I got thinking about whether or not the aforementioned rant was still there as I’d been ‘saving it’ for a special occasion.  In that way Social Media Managers always save messages that prove points or are so outrageous as to be something to discuss at later events, panels or what have you.

This rant was particularly special in that it came, of all things, at the expense of the poor Samsung Gear VR. It’s terrible crime? It launched.

Back on November 23rd 2015 we put up the Gear VR Launch trailer aka “It’s Not A Phone, It’s A Galaxy” as Samsung celebrated the launch of their smartphone-based head mounted display (HMD) and showed both it, and some of the Gear VR experiences that you could enjoy at the time, off.

One man though was very, very angry about this and his name was Chua Neng Lis. I know very little about him. He used to work in a plastics factory in or near Minnesota. He also got very upset about North Korea, America and South Korea once on a CNN video, so I imagine wherever he is now he’s been pretty miffed about the last few months. Lis was not pleased about the situation with the Gear VR at all – especially as he seemed to think he’d come up with the idea in the first place.

I should point out that I’ll be posting the message text as is without changing any punctuation, spelling or presentation.

“thats still not virtual reality. your. just. mocking. and. manipalteing. my. ideas.

There is of course something to be said about corporations and capitalism and the ability of the rich and poor to earn a fair living, and on reading the first time I honestly thought up until this point that this is what Lis was trying to convey.

That was just the first of nine messages left on the video by Lis which proceed to get more and more bizarre.

“HOE. WAS TELEPATHY. STEALING MY IDEAS FROM TELEPATHY AND TELEPATHY CHANNEL. OH RIGHT. I CAN DO ANYTHING ABOUT IT. BUT WAITE. TO KILL YOU AFTER IM DEAD.

AND NOW YOUR TRYING TO STOP THAT. LOL. NOW ASK YOUR GHOSTS THOUGHTS STEALING FROM. YOU. IS IT EASY OR HARD TO KILL ME AFTER IM DEAD. OR ALIVE.”

Whose ghosts? Ours? Samsung’s? I should point out that no he’s not referring to ghosts as in spooks/spies, but actual ghosts. It seems Lis has a BIG thing about ghosts. Also vampires. According to him America is full of cults and vampires. I blame Buffy. She’s slacking off.

“AND THATS STILL NOT VIRTUAL REALITY. YOUR USEING THAT DEVICE TO STEAL MORE IDEAS. FROM PEOPLES BRAINS AND HEADS. EVEN USEING AND STEALING OLD DATA AND INFORMATION. YOU ALL TOOK PART HACKED. AND STOLED. INTO YOUR OWN MINDS BRAINS AND DATA. TO ACT OUT LIKE ITS YOURS. WHEN YOU KNOW IN YOUR BRAIN AND MIND. ITS NOT YOURS. EVEN IF YOU WOULD. “LIKE”. TO THINK SO.

THEY KNOW I CAN KILL YOU. USEING THAT DEVICE.

NOW HOW ABOUT THAT ARE YOU GOING TO STEAL. AND UPLOAD WHAT I JUST SAY AND SAID. AND MY BRAIN. UP TO THAT DEVICE ALSO TO. CONTROL AND KILL THOSE PEOPLE AND MINDS.”

He can kill ghosts with VR? Literal ghosts working for or with the Government?

“yeah i can kill you with that device of yours. AND IM NOT JOKEING.”

Well, that clears that up at least.

“MISTAKES. ARE MADE. AND PROBLEMS. HAPPEN. AND YOU DONT THINK. I DONT ENJOY OR HAVE FUN. KILLING PEOPLE ON MY OWN. LOLOLOL.

YOU SHOULD LOOK UP YOUR NEWS MEDIA FEEDS. AND HOW MANY DEATH IS OCCUREING. DEFINETLY NOT YOU HOOKING ME UP. ITS YOU HOOKING YOUR SELVES UP. TO. SOMETHING. THATS KILLING YOU. AND WAITEING. WAITEING TO JUST NAB YOU AND KILL YOU RIGHT AFTER. YOUR BRIGHT IDEAS AND SHOWS. ^_^. NOW WHOS WATCHING AND LISTENING TO ME OVER THIER. HRMMMMMMMMMM.”

Yoda’s changed a lot over the years, hasn’t he?

“HONESTLY THOSE GHOSTS GIVEING YOU IDEAS. AINT SAVEING YOU OR YOUR ASS.

YOU CANT CONTROL THEM. THIER CONTROLING YOU.

LOL. CANT HELP YOU THIER BRUHHH. YOU CANT STOP THEM. LOL.”

So if you’re keeping track on this and I can’t blame you if you’re not. Either we, Samsung or the American Government (I assume) are in league with the undead who are stealing minds potentially via VR which isn’t VR and he invented it.

“NOW. WHO CAN STOP THEM. THAT YOU HEARD. YELLING AND TALKING ON TELEPATHY CHANNEL. HRMMMMMM. 2013. was. the. DATE. LOOK IT UP YOUR SELF. I HAVE THE SECRET CODE TO KILL YOU YOUR CULTS RELIGION GOVERNMENT AND RACE OFF. AND YOU THINK. YOUR GOING TO BE RECORDEING MY THOUGHTS ON TELEPATHY.”

Well, no… I mean you’re kind of telling everyone your thoughts via a YouTube comments section. Not really the same thing as telepathy.

Incidentally though reader, those thoughts you’ve been having? Demonetised.

“NOW HRM HRM HRM. WHY WOULD YOU GO AND SAY THAT. YOU CANT EXTRACT THOUGHTS YOUR SELVES. AND WORSHIPING A GHOST TO.

HOW ARE THOSE GAY CULTS. AND GAY VAMPIRES AND VAMPIRES TREATING YOU. HUNTING THEM DOWN VERY WELL. ARENT WE.”

Ah, there are the vampires I mentioned earlier. And yes, he also has something of an issue with homosexuality too. Because clearly we needed some issues with homophobia in the rant as well.

“ALSO YOUR STEALING MY MORES CODE FROM ME. STEALING FROM. TETRIS. AND. ASIANTOWN.NET.

EVEN MY PERSONALITY MORE CODE. WHERE I CREATED MULTIPLE PERSONALITYS. HRMMMM. NOW WHERE AND HOW DID YOU GET THAT FROM. HRMMMMMMMMM. FOR SURE YOU KNOW YOU STOLED. IT. AND FOR SURE. YOUR PLAYING THE BLAME YOUR SELF TO CLAIM GAME. NOT YOURSSSSS. FOOO.”

Yeah, foo. That L block’s got it coming.

AND NOW YOU HAVE TO LIVE WITH IT. KNOWING. I WILL KILL YOU ALL OFF. FOR GOOD. AND HUMANITYS SAFETY. BECAUSE OF YOUR OWN RULES AND LAWS. YOU STATED. ON TELEPATHY CHANNEL. AND IN YOUR MOVIE SCRIPTS SCRIPTS. AND DOCUMENTS. ABOUT ME. AND MY KIND. AND PEOPLE.”

Well, er, I think killing us all off because Gear VR launched is a bit over the top. I mean, why can’t you just write a grumpy petition on Change.org?

I won’t go into the next bit too much because he just descends into ranting about whoever his targets are at this point being gay and getting their comeuppance (I guess?) by being violated by the supernatural. Needless to say, it all comes to a universe redefining climax with the inadvertently hilarious phrase-

“SPIRITS. UP THE BUTT HOLE FOR YOUU. FOO;”

And to prove I’m not making this all up… 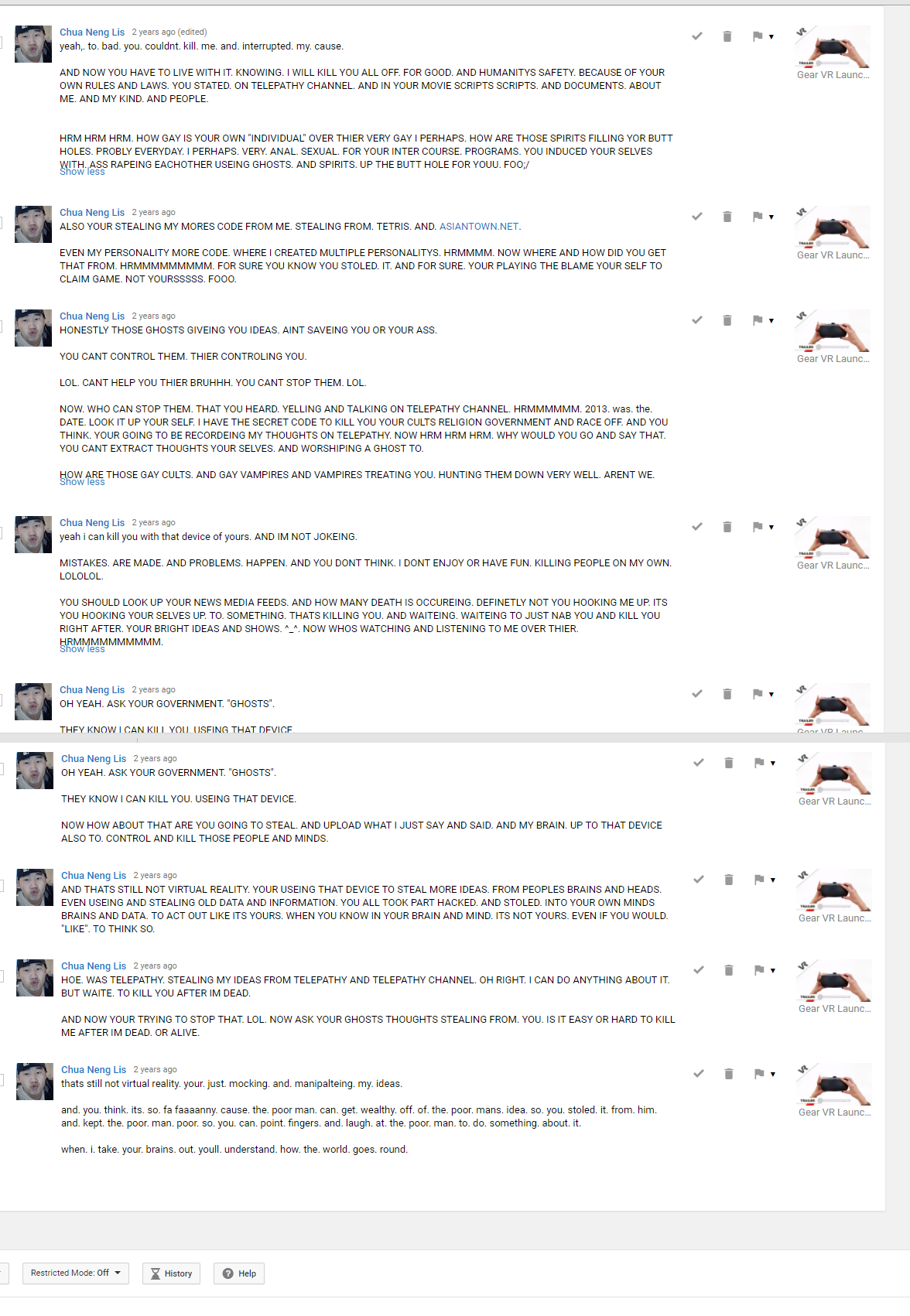 Yes, these did get reported by the way and I’m very much hoping someone got to speak to them.

But when you get upset with me or us online just bear this in mind: I’m really not that phased, and that’s because honestly you are not in the same league as someone like this guy. Hell, you aren’t even in the same dimension, probably. And here you were thinking people getting bent out of shape over exclusivity periods was over the top.