It’s a pretty hectic week for us, so for today’s VR vs. column we step back into the world of fiction for my little sub-series where I discuss instances where virtual reality (VR), augmented reality (AR), head-mounted displays (HMDs) of any kind or related immersive technology appear.

Today we enter the world of anime, and the first of two series linked by the voice of its principle character. For those who may have heard of the term previously, but aren’t entirely sure what that means, anime is a shortened version of the Japanese word animēshon and it refers to “a style of Japanese film and television animation, typically aimed at adults as well as children” – to quote the definition that comes up on Google. 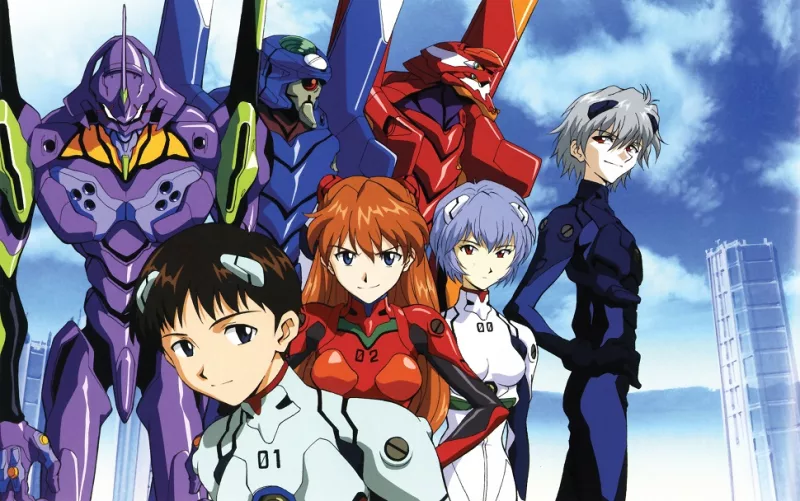 Ever seen a Studio Ghibli film? Anime. Watched the original Voltron? Anime. Someone flung a VHS copy of Akira at you in college? Anime. Even The Mysterious Cities of Gold is anime, although that has the distinct weirdness of being a French-Japanese series.

Today I look at the first of two series which are among my first exposures to anime ‘proper’ and are also among my favourites to watch; both of which feature the use of immersive technology.

Where do we even begin with Evangelion? It’s one of those series that straddles the genre. A colossus that has left an indelible mark on the culture of Japan itself.  The backstory in short is thus: The Earth is a mess after ‘Second Impact’ a catastrophic event akin to the meteor that wiped out the dinosaurs. After the death of his mother and abandonment by his father at age six, shy and retiring boy Shinji Ikari is summoned by said father to futuristic fortress city Tokyo-3. Because he now “has a use” for him. Nice chap. The use turns out to be as pilot of the gigantic purple mecha known as Evangelion Unit 01 – and by-the-way get in it RIGHT NOW and defend us from this mysterious gigantic alien monster bent on destroying the world, would you kindly?

Already (and deliberately, I might add) traumatised by his upbringing, Shinji is basically blackmailed into piloting the EVA after they wheel fellow pilot Rei Ayanami out on a gurney, still bleeding from a previous accident. Did I mention that Shinji can feel the injuries inflicted on the EVA and his first sortie ends with being stabbed through the skull and the mysterious EVA going berserk? 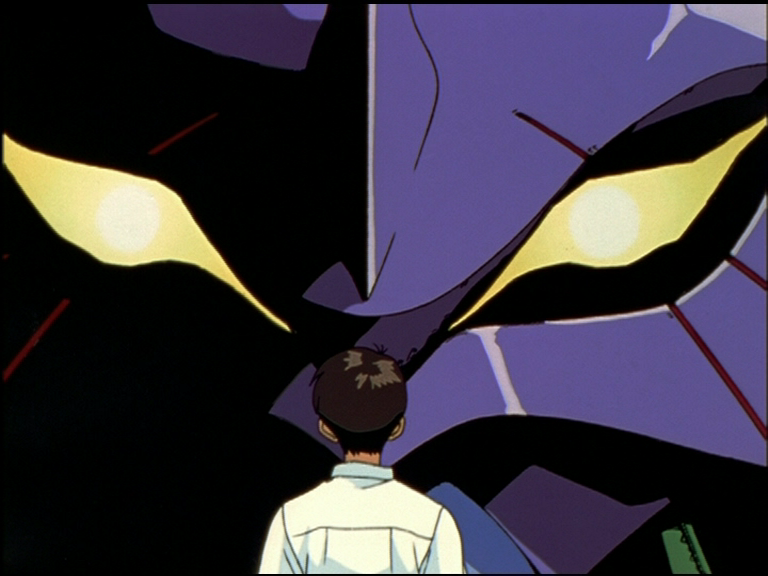 What follows are conspiracies, secrets and lies everywhere as the only real truth seems to be that as the pilots battle the Angels, mysterious beings foretold in the Dead Sea Scrolls, they are nothing but pieces in a far larger chess game. Expendable when the time is right – and in the meantime free to be hurt and injured in pretty much every way it is possible for someone to be hurt. War is misery in this series, and the brief moments of happiness for the teens are ones to be cherished. As they are, in many ways, as orchestrated as the battles they fight.

So where does immersive technology feature into this? Well, it actually does so twice.  The first instance requires a bit more explanation though.  You see the Evangelions aren’t actually robots, they’re something far more than that – synthetic lifeforms cloned in part from the very beings the organisation NERV is fighting. Including the one they effectively have nailed up in their basement. (Long story…) To fight, the pilots must ‘synchronise’ with their EVA, which is how they end up feeling the pain the EVA feels, as the higher the sync the more power and the greater the degree of backlash the pilots feel. Even generating sympathetic injuries.  Essentially, they have to put their mind inside the Evangelion – and it’s not an easy process.

In order to pilot, and make sense of everything the pilot uses an ‘entry plug’, essentially a tube of technology which is screwed into the mech through its neck (see above). Inside the entry plug, which Rei describes in a moment of introspection as “the throne for a soul” there’s the pilot’s seat and the interior is surrounded by some sort of wraparound LED screen. What it is, is never really confirmed. As the pilot synchronises it essentially shows the viewpoint of the Evangelion, and sometimes other visuals, such as a heads-up display (HUD) for information and communications.  So, all those Evangelion related experiences in Japan are pretty accurate by way as to what the pilot would see.

he main function of the screens though is to act as the equivalent of headset-less VR, there’s been plenty of equivalencies to this that we’ve seen down through the years – as well as people suggesting inputs be directed via the nervous system/direct brain access.

In the third of the modern ‘Rebuild of Evangelion’ films, Evangelion: 3.0 You Can (Not) Redo, a time jump shows this technology expanded to contain not just an EVA pilot but the entire bridge of WILLE’s aerial battleship the AAA Wunder and its crew.

Yet Evangelion also shows off the pilots using a targeting scanner headset/visor on numerous occasions when utilising long distance firearms.  Shinji first uses it in battle against Ramiel, the 5th Angel (original series timeline) while both the pilot of Evangelion Unit 02 Asuka Langley Sohryu (aka Asuka Shikinami Langley in the Rebuild films) and Rei inside Prototype EVA Unit 00 both use them in the battle against the 15th Angel, Arael.

Outside of this in the Rebuild films, Mari Makinami Illustrious – whose inclusion the series has yet to actually be explained, frustratingly – uses a prototype version of a more traditional style helmet in Evangelion: 2.0 You Can (Not) Advance.  The beginning of the follow-up film, 3.0, shows a battle in space with both Asuka and Mari using an evolution of this design.

Next time in this sub-series we’ll be looking at a more conventional use of VR in an anime that in many ways is the polar opposite of Evangelion. Until then.