Home Articles VR vs. VR Vs. The End Of The World

Repent! Repent foolish sinners of VR, for the time of judgement is at hand! For doom has descended upon thy technological domain and hath wrought its final curse upon thee. Tremble in fear for your harbinger of doom is here, the terror that is…. a bad TIME magazine feature!

It was relatively early in the morning for the VRFocus team; both those at Gamescom and those back in the UK, when we were made aware of last night’s sudden raging storm of fury and outrage. It was all a little too much for our bleary eyes and sleep-befuddled minds to take in. If you’re not familiar with the story so far, to summarise the latest issue of TIME magazine features Oculus founder and undoubted face of virtual reality (VR) Palmer Luckey on the cover in an interesting representation of enjoying what VR can offer. 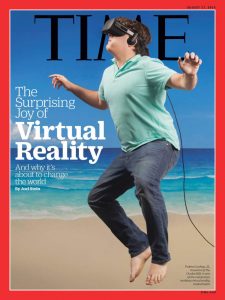 It’s awkward and doesn’t exactly do the image of VR, let alone Luckey himself any favours. Whilst the headline is relatively positive, the imagery is deep in the ‘this is a slightly awkward thing that will make you look silly’ .

It was though perhaps not nearly as awkward as the contents of the article itself. It initially described Luckey “not like other Silicon Valley nerds” and that “he’s cheery and talks in normal sentences that are easy to understand”. Ire from the VR community was raised still further on the description of Luckey as not looking “like a guy who played Dungeons & Dragons so much as a character in Dungeons & Dragons. “

It was an opening so utterly detached from the last two decades of social change and so rooted in eighties-to-nineties stereotypes that it might as well have made fun of him being distracted by silly comic books or mentioned how, shock-horror, he didn’t wear glasses –  not even ones with tape holding them together, all whilst the writer wore a pristine varsity jacket.

The Twitter firestorm led to a number of outlets and an even greater number of regular followers of the technology either stating as fact or asking the question has TIME Magazine killed VR?

No, of course it hasn’t. It’s given writing about VR a bit of a bloody nose, but the technology itself hasn’t changed. In fact it has probably done more damage to TIME than to VR, sparking a wave of mocking photoshopped image of the Palmer Luckey cover image on increasingly bizarre adventures.

The graphics are amazing. pic.twitter.com/tn1FZF1gO8

And there was The PalMatrix.

Whilst some even dared to ignore the warning of “don’t cross the memes”.

The HTC Vive was shown to ‘perform’ in just as silly a way as the Oculus Rift.

Am I doing this right? pic.twitter.com/ZmCx969V1e

And even major studios got in on the act.

– all of which has been much to the amusement of Luckey himself.

But let’s be clear, all the initial anger has in no way been at VR, nor have the memes been having fun at the expense of the technology or Luckey himself really, but are a dig at TIME’s presentation.

It is somewhat symbolic of the problem I raised in my last VR Vs feature; the problem of marketing a technology that really requires you to experience it via media that does not allow you to adequately do so. Although in this instance it isn’t so much the stereotypes and fictions of the medium but those about the creators themselves that act as a detriment.

So no. TIME didn’t kill VR. Some outlets have compared the cover to the story of how one Google Glass user’s photo of them wearing the device in the shower (somehow) damaged its credibility. I note that Google Glass 2 is on the way… so in much the same way as that this is hardly a fatal blow. Technology, progress and innovation are not something you can stop in that way with one photo. Delay or inconvenience, certainly.

Where does that leave us? Well if you want to find out what the technology can do, firstly I would recommend becoming a regular of VR specialist and technology websites (sites like ourselves), and second if you ever have the opportunity please do try it out yourself.

Or would you like a bit of a more down to earth interview with one of the men behind the technology? If so here’s a sit down interview we conducted with Luckey at SVVR 2014 that you can watch.

Either way, VR is very much alive and kicking. Consider yesterday and today a minor bump in the road; a road populated by a tech savvy public – and we know when someone probably shouldn’t be driving on it.

'Cause this is VR.
VR, right?
It's utterly amazing,
And it makes your life take flight. pic.twitter.com/0M87YOsjQE