Home Articles The Tangent: The Next Nintendo

Before we begin, I’ll take a brief moment to reflect on the previous Tangent. It’s fantastic that, at least for the moment, we really are seeing “a true embrace of past and present both within the brand.” It will be interesting to see how Sega accepts the feedback from their 20th Anniversary celebration, or if they simply ignore it. I want to see a little more of the upcoming game before I sing its praises, but I’m very excited by what they’ve shown off so far.

Now let’s turn our attention to a brewing storm, a frenzy of rumors and whispers tumbling out the door one after another. Three years ago, almost to this day, one of the earliest Tangents was posted, The Tangent takes on: The Micromote. The subject of that article was the talk of Microsoft’s supposed project “Newton,” a remote-shaped controller much the same as the Wii controller, or as it’s since been revealed since, the PlayStation Move. Whether there was truth to those rumors or not remains unclear, as Microsoft bucked expectations and focused on a purely camera-based motion-tracking system. But just as the original article focused on the inspiration for and logic behind the Wii Remote, we must once again echo those same inspirations when sifting through the muddled, jumbled rumors surrounding the next Nintendo console. First, let’s summarize some of the most prominent rumors.

Originally suggested as “Project Butterfly” by NGamer magazine, rumors quickly centered on the development work being titled “Project Cafe” or “Project Café”. Naming aside, the most prominent aspect repeated over and over is that the controller somehow houses an approximately 6″ (on the diagonal) touch screen. There’s been lots of speculation about the actual dimensions of the screen, its presentation and integration in the controller, not to mention whether it will sport an HD resolution or multi-touch capability. But the screen is the most-echoed aspect, over and over again. There’s also talk of an embedded camera on the controller, and backwards compatibility with Wii titles, although given that the Wii’s backward compatibility required you own GameCube controllers, I wouldn’t presume that the primary controller will be designed with legacy titles in mind. Horsepower is expected to clearly exceed the 360 and PS3, which to be truthful is not a difficult task for a console still in development versus one released to market over five-and-a-half years ago. The GPU’s thought to be an extension of the ATI R700 family, and from there, the current focus is IGN’s rumors of a 360-sized, SNES-styled device, that to me sounds nothing like something Nintendo of this era would actually release. I’m not saying I couldn’t be wrong, but it flies in the face of Nintendo’s design logic for a decade now. Size does matter, especially when you’re talking about the Japanese market. 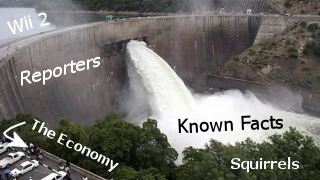 So, why should we put any faith in these rumors? There’s always talk of the next Nintendo console to be revealed any moment now, where we’ll don our ham hats and ascend to the 26th dimension, and there’ll be a new Mario game too. Here’s a vague drawing, note the squishy knobs made of an element not yet invented, Miyamotanium. There’s a couple of reasons why there seems to be more to this than the average wishful thinking. First off, the explosion of rumors both sourced from and linked to by popular sources. To put it one way, it had the feeling of an exhale. Now even the biggest sites do sometimes jump on faulty rumor trains because they want the hits it will generate, but they also want to be known as the people who broke the story early on, and were right. Understand that even if a site like IGN knew about a brand new Nintendo console, knew what it was called, knew the specs, they can’t tell us. They can’t even playfully hint. It would completely wreck their relationship with Nintendo, not to mention other console manufacturers, and they depend on that to survive. They can’t say anything, until someone else says it. It has to be a fairly notable site, it has to have already gained some mileage, but then they can report it as a realistic-sounding rumor, or a leak. It’s not just IGN either, and while there’s no guarantees Nintendo has talked to them or anyone else about the console, word does have a way of creeping out. Even publicly, Nintendo-friendly developers have shared rather loaded statements about the Wii platform going past its prime, and Brawl developer Masahiro Sakurai has mused about HD game development. If this were simply some wild speculation, it’s difficult to believe it would be converging all so suddenly, from so many sources. Not impossible, but unlikely.

Secondly, and this is a simple reason, Nintendo has an investor meeting on the 26th in Japan. The timing of the explosion of rumors and this meeting doesn’t seem coincidental, but that doesn’t preclude the possibility that one was inspired by the other. In other words, it’s a prime time for a false rumor, just as it could explain a real leak. Even if they do deem to pull the curtains back a bit, we might hear as little as a project name confirmed. In related news, there was a quiet Wii price cut, the type of cut you’d see just before news of a successor, or alternate model, hit.

Finally, Mr. Miyamoto himself. There’s something you have to remember about Miyamoto, and it’s really nice when you think about it. He’s not a number-cruncher, he really does seem to love gaming, and in a way he’s like us. He gets excited about it, he wants to talk about it, even when executives want him to button up, even forbidding him from discussing his hobbies in public, as they’re largely the source of his inspiration. Interviewed last week, he all but stated a successor was coming, many sites citing a “Where there’s smoke there’s fire” line, but he also implied that some of the rumors were off the mark, and said the usual line that Nintendo is always working on a successor. He then suggested that we should wait patiently for the announcement. Not that we should focus on the Wii, but wait for the next announcement’s proper time. Something may have been lost in the translation, but if he’s giving the nod to rumors, we can’t be far off from receiving some amount of news on the successor.

But have we seen that successor already? The internet is awash with mock-ups and suspect specs and possible names, including the Stream mock-ups gaining steam (and for the record, I personally suspect those are faker than fake, the name itself might even be a troll). Here’s the problem: Nintendo has gotten very good at throwing curveballs. The 3DS is the most basic “upgrade” they’ve done in a while, and even that had some unique hooks people didn’t expect, particularly the namesake feature of the portable. They also have very specific design requirements, as outlined in the Micromote Tangent. That’s why when I look at these strange, jumbled messes of mock-ups with too many weird quirks and buttons and things that take time to wrap your head around, I know they’re probably far off the mark, unless Nintendo has suddenly changed philosophies in the last few months. The Wii Remote was designed to look simple, inviting, and unimposing. They left off features they could have included specifically so it wasn’t a scary thing to pick up and mess with for the average consumer. I can see them focusing on a slate-style controller, but when you start putting in weird hinges and twist controls and machines that go “Bing!”, well, just imagine the befuddled look on a senior’s face as they held it in their hands. There’s a need for familiarity, and if not simplicity, then at least clear direction. If they need to play Transformers with the controller just to work it, they’re not going to want to touch it. And right there you’re axing a major chunk of market Nintendo’s carefully cultivated over the past few years.

At the end of it all, we have only a few days until the first major goalpost, the investors meeting. If nothing is shared there, E3 will be the next suspected event. If not that, then some time around TGS. Eventually Nintendo will have to reveal something! But all joking aside, as much as I’ve enjoyed some of the games on the Wii, I’ll be more than happy to see the successor. Unless it has weird squishy knobs on it. And even then I might give it a chance.