Welcome to this month’s In-Depth article! If you don’t know what these monthly pieces are that I do, the In-Depth articles serve to provide a case study on a particular Sonic subject. Usually, I do a massive load of research on that topic, with the biggest asset being the historical record.

This month’s article is a doozy. It talks about something that a lot of the Sonic community is aware of in some shape or form. This is mainly due to the fact that it’s a meme that just won’t go away, despite the meme being outdated and no longer accurate. I am, of course, talking about the Sonic Cycle. Let me explain.

The Sonic Cycle is old. Very old. Its origins can be traced back as far as April 7th, 2008. when a NeoGAF user by the name of Baiano19 posted one of the earliest forms of an image that would be heavily associated with the meme. The image was later reblogged by PlayAsia that same day. Coincidentally, this around the same time frame that Sonic Cycle searches began to appear. Another thread created on Digg on January 18th, 2009 evolved the Sonic cycle, when the thread ended up on the home page of Digg’s website. A user by the name of Goldhearted coined how the Sonic cycle actually goes:

This is the typical sonic cycle these days

1. New info release of new Sonic game, people say it’s gonna be Sonic’s comeback.
2. More or less, hype is generated as info, screens, vids, etc. releases.
3. Game comes out, it ends up like mediocre-shit. People say nothing can save Sonic.
4. Go back to #1

We will actually examine the steps of the cycle in a moment. But I want to direct you to the image itself, the one so heavily associated with the meme: 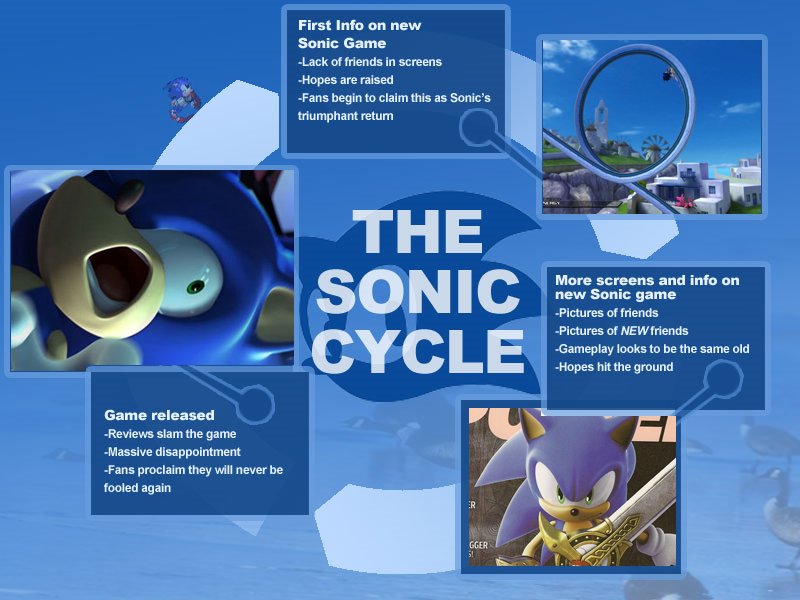 This is the Sonic Cycle. A nearly 10-year old picture. This goes into more detail about the cycle that the Digg post elaborated on. But let’s actually tackle this cycle, bit by bit, to examine just how inaccurate this cycle has become, or at the very least, how outdated it is. So let’s look at step one:

So with that, a full analysis of the Sonic Cycle has been done. I honestly didn’t think I’d have to write an article about the Sonic Cycle, let alone examine every bulletpoint it brings up. And in 2017, no less. But here’s the nail in the coffin for the constant mentioning of this cycle. You see…it was already declared dead in 2010. 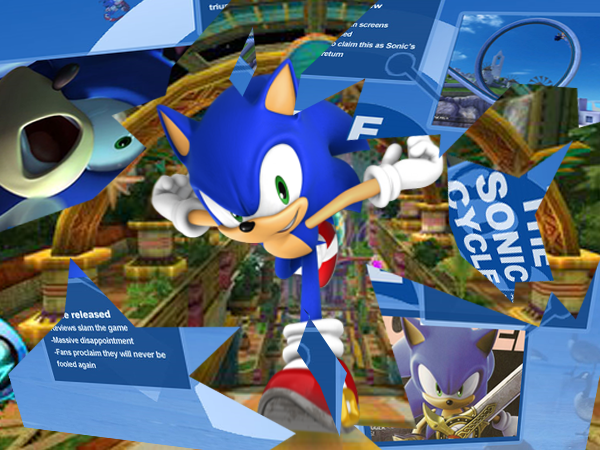 This image was created post-Colors. Some of you may remember it, as it became somewhat of a meme of its own back then. To add even more weight to that declaration, remember NeoGAF? You know, the forum I sourced as being the origin of all this? Yeah, even they don’t see the point in the cycle either. And that post was made a few years ago. Even after Rise of Lyric released. Even GameSpot had a thread that was entitled in honor of the cycle’s death. In fact, since 2010, multiple variations of the Sonic cycle have come out, all of which either criticize the cycle being brought up in the first place or give some praise to how Sonic has come since the cycle was born.

So why, then, is a cycle so criticized as irrelevant, outdated, and dead still showing up? So much so that it has gotten to the point where I’ve actually had to write this article? Because of the mainstream gaming media. They still bring it up. Again and again. Part of why is that one theme that shows up in the cycle: Sonic’s friends. The hatred never went away after 2008. Sonic Generations recieved criticism in IGN’s review for merely having Sonic’s friends appear in the game, and the NeoGAF community is none too pleased about the presence of Sonic’s friends in Sonic Forces either. Sadly, this is why a playable 3D Knuckles or Tails may not happen anytime soon. I would love nothing more to play as Knuckles or Tails in a 3D Sonic game again, and I fully understand those of you who do, but from a business standpoint, it may not be the best thing to do if you want to bring in new fans. SEGA can’t rely on just the Sonic fanbase. The fandom would just stall out and gradually decline. If SEGA’s going to pull off successes, you have to bring in new fans too. And that includes those that may not be so welcome to Sonic’s friends. It’s not so much “playing it safe”, but more so trying to not let the Sonic community decline and, especially, for good sales. Sonic’s sales history has shown that the fanbase is not as large as it may seem. Yes, there’s loads of people who don’t interact with the online community, but it’s not the 500,000-1,000,000+ fanbase that some may think it is. And the Sonic fanbase alone is not going to deliever a Sonic game that sells well. There’s a reason why SEGA relies so much on the gaming mainstream media to get the word of their games out, such as E3 interviews, even though some feel that the gaming media isn’t that fair to the Sonic brand. Like it or not, the mainstream gaming media is how you PR, and it is, perhaps, the #1 asset to have in making your game a success. Sonic fans, and even a gradual increase in sales from word-of-mouth, won’t do it. But I’m digressing a lot here.

Nevertheless, despite all this, the Sonic Cycle is flawed. It’s outdated. And, most importantly, it’s dead. Regardless of how you feel about Sonic’s friends, there is absolutely no point to bring it up anymore. The fact I even felt that this entire article needed to be written, and in 2017, still confuses me. I feel like I’m contributing to beating a dead horse, so to speak. But at least, now, you know why it feels that way. As for how the Sonic community sees the Sonic cycle, it is largely ignored for the exact reasons I have already given. In the case of Stadium’s message boards, it is even banned from being discussed. The simple fact is, even with how critical the Sonic community can be towards new games, the Sonic Cycle is just tiring. The media keeps bringing it up, when people want to move on from it.

Archie Update: Ian Flynn – “I’ve Heard We Should Get [Sonic] News by End Of July”