President Obama stepped forward onto the White House porch yesterday, as per tradition, to pardon a turkey for the Thanksgiving season. This year however, the President in what will be his last pardoning chose instead to pardon Sonic Boom.

The Wii U and 3DS title (as opposed to the promising and highly enjoyable comic and television series of the same name) has been widely panned across the video game community for its broken mechanics, dull gameplay and repetitive characters.

“Today I am taking an action fully within my legal authority. The same kind of action taken by video game reviewers and consumers. The same act taken by Democratic and Republican presidents before me – to spare the lives of two turkeys: Sonic Boom: Rise of Lyric and Sonic Boom: Shattered Crystal from a terrible fate… being played by any gamer with eyeballs and a desire for a great Sonic experience.”

“I would like to thank Gamestop for their hard work in providing me with a copy of each, although I wasn’t pleased that the local store didn’t have the pre-order gift that Joe Biden reserved.” 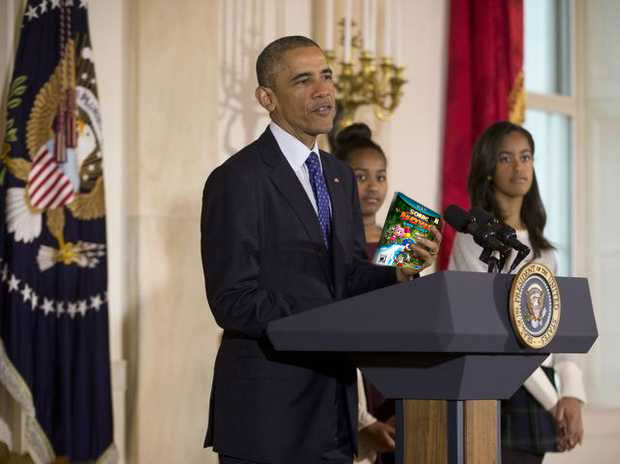 Obama brandishing Wii U title “Sonic Boom: Rise Of Lyric” at the ceremony as his unimpressed daughters look on.

Obama’s radical action has effectively saved the games from being violently attacked by frustrated American gamers with knives, forks and other sharp impliments.

Republicans were quick to condemn Obama’s “reckless actions”, Senator Stevens calling it “A grave mistake from a President creating contrversy at every given opportunity. We need more Green Hill and less Capital Hill.” Before adding, frustrated, “Seriously, if this isn’t impeachment material I dunno what is.”

Democrats were also quick to comment, one voter – an ESRB representative – commenting on Twitter: “Oh ffs, Obama has finally lost it. Thank goodness only #twoterms.”

What will come of the games now is not clear but it is believed they will be given their freedom and placed in the care of a Tampa based Youth Club. We can only hope for the youth club not having any current gen Nintendo consoles.

More on this as it develops.