Welcome to the weekend, its time to get moving with some updates before I swan off to Japan for a week. Naturally thats not what I’m doing exactly, I’m using an aeroplane… not a swan. We’re a bit behind on Radio Redux shows owing to a few things here and there so today three episodes have gone online! 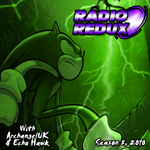 It’s Talk Like A Pirate Day again, so be prepared to swash a buckle as ArchangelUK, Echo Hawk and Blake Draco talk this week’s goings on including Wrecksfest 2010: A more intimate meeting than previous gatherings.

Radio Redux #526 – The Podcast Of Many Colours Show

The crew talks up the prospects of Grope-A-Werehog day, scaring Bentley Jones, who AAUK’s SOA opposite number REALLY is, getting SOS11 guests and AAUK receives an important letter.

AAUK, Blake and Echo debate the awesomeness of the Sonic Colours drill effect, being the true flagship show, knowing weird people and what Emerald Coast is doing with its Dream To Nightmare series. But why would Echo and AAUK need earplugs?