The new Smash Bros is coming; heck, it’s probably lurking outside your door if you live in Japan, and we’ve had several months of teases and reveals of characters old and new. Ever since the previous game Smash Bros. Brawl, new character announcements have felt more and more like an event to the point that, with the rise of Nintendo Direct, they have indeed become mini showpieces.

Of course we all have characters that we believe would make excellent additions to the cause and in the vast majority of cases it simply isn’t meant to be. The LMC team though put their collective heads together and came up with their choices of characters.

For me one character has stood out for some time as someone who would make an excellent addition to the Smash roster. Now I’m sure a lot of LMC’s contributors are going to mention third party characters. However for me whilst the addition of third party characters are great in the game, they shouldn’t come in at the expense of the ‘Nintendo experience’. Smash is a great way of breathing life into old characters and niche characters. There are plenty of leftfield Nintendo characters that could be added and so I also want my choice to not be one who would necessarily be at the top of everyone’s list. So no, I’m not going to pick Ridley – though God alone knows they should really pull the trigger on him at some point. I wouldn’t be against another super-heavyweight on the roster.

So, let’s talk rules. I’ve already said I want my character to be a Nintendo character. I also want my character to add something to the gameplay AND not be from an already overused franchise. Let’s face it. Pokémon has been run into the ground at this point with Smash. The Mario series also needs no further additions, same with Legend of Zelda – which now has five characters with the separating out of Zelda and Sheik. We really don’t need any more interchangeable Fire Emblem characters either. Speaking of interchangeable, or clone characters, we really don’t want to add to that so I want my character to really add something to the selected franchise’s offerings and the playability of the game itself.

My choice is Krystal from Star Fox. 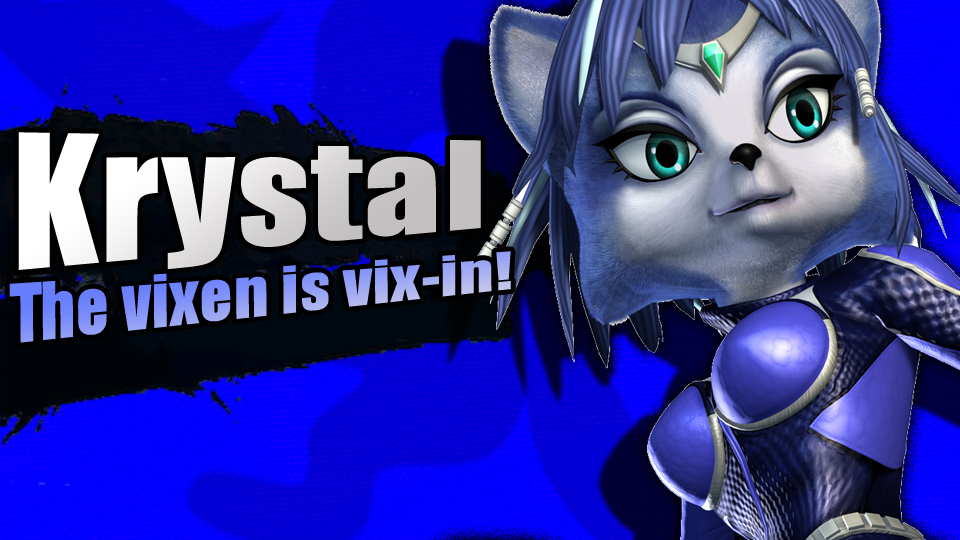 The choice of Krystal might put some of you off, especially as she first appeared in Star Fox Adventures on the Gamecube (aka Dinosaur Planet) but she is a Nintendo character and she has appeared in multiple games in the series. Three to be precise (the others being Command and Assault) and is very much part of the furniture of the series. She’s also appeared before as a trophy and as part of Fox/Falco’s secret taunt. So she does have SOME history with Smash Bros.

Krystal’s inclusion accomplishes many goals. It means that Star Fox as a franchise gets a fourth character which isn’t just a clone – let’s face it, there’s not much variety in what Fox, Falco and Wolf bring to the table. We also get an additional female character (always welcome) who isn’t a princess, but most importantly for me choosing Krystal provides an entirely new fighting style. There is, to date, not a single staff-wielding character in the Smash series. This seems ludicrous to me. Krystal can wield her staff from Star Fox Adventures and you can have a nimble, not physically strong necessarily but technical character who has long, mid-range and close combat capabilities based on the staff’s shown powers.

These includes attacking moves (firing projectiles and creating impact shockwaves), defensive moves (projective shields), movement effects (teleportation/flight boost) and even creating disguises to cause confusion. Krystal also possesses a degree of telepathy so she’s got a lot to play with beyond the base weapon she has. She’s even got a several alternate costumes already established which would also lend itself to Smash. (SFA tribal look, her blue flight suit, Armada’s pink flight suit, Team Star Wolf Krystal and her ‘Kursed’ alter-ego from one of Command‘s more darker endings.

Bottom line stave-type weaponry isn’t boring just because its not got a blade, look to Kilik from Soul Calibur as to how you can animate and create a flashy yet technical character. From a players point of view you get something different and more play styles can only help to enhance the depth of the game.

I’m pretty sure that if any second SEGA character was going to be added to the Smash Bros roster, it would probably be Shadow the Hedgehog. Not only would it be pretty easy to smash him into the game (pun intended) due to being an assist trophy in Brawl, but he’s become such a Sonic fan favourite that there really wouldn’t be any other alternative. He’s apparently one of the most requested characters for a start!

But ignoring boring realism, there are many other SEGA characters which would easily feel at home within Ninty’s Smash Bros universe… Miss Bayonetta would be a perfect choice to tie in to the new Wii U sequel; some of the Virtua Fighter boys such as Akira or Jacky could match the retro throwbacks of new Bros Pac-Man and Mega Man; and Ryo Hazuki would also keep the raging fanboys appeased for all of five minutes. If he’s man enough to fight sailors, he can handle a pair of plumbers.

Of course, there is only one character I would actually love to see, and so I offer you my clichéd, predictable choice; Vyse. 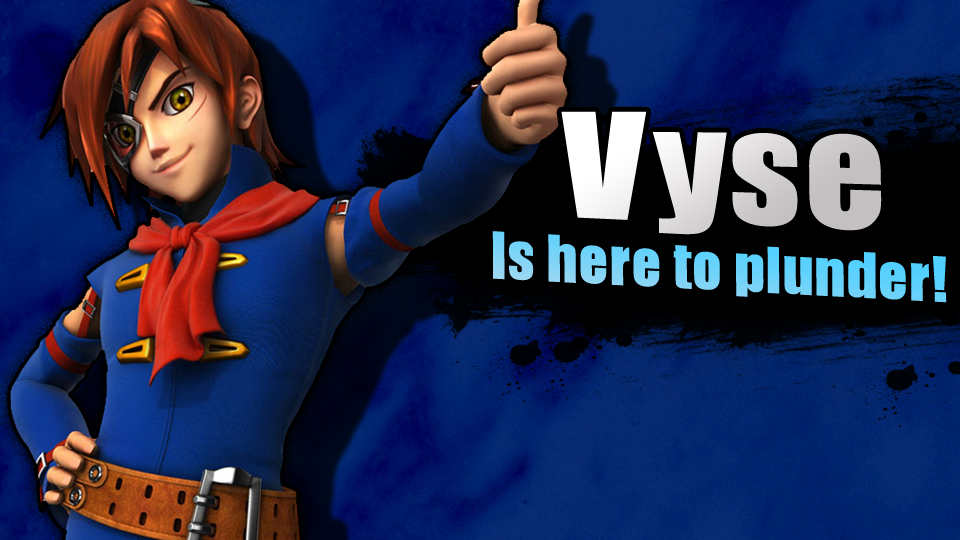 Not just a predictable choice, but a sensible one. Vyse has already tasted modern superstar glory within his Rogue’s Landing stage of All Stars Racing Transformed, and such a level could easily be transformed into a new Smash Bros stage. In fact, there is a lot of potential for fun, fast moving 3D stages that could be taken from Skies of Arcadia. Just imagine; two ships flying side by side, each acting as a level tier which can be hopped upon. One is a Valuan ship, the other is the mighty Delphinus. Cannon balls and loopers fly at all angles in the chaos and at the centre of it all is the Blue Rogue himself.

Vyse would be a worthy opponent. Armed with his trusty cutlass, his main style of battle would be swordplay with the strength of Marth, but perhaps with speedier attacks closer to Link’s style. Though he would favour his cutlass, Vyse would also have access to the power of the moons and use magical abilities such as casting Pyri or Wevli to blast his foes out of the sky. For his final smash, there are many options. Vyse could unleash his own power with Cutlass Fury, or he could call upon his crew mates. Even better, if the Delphinus isn’t being used as a stage then let’s go all out… Moonstone Cannon, FIRE!!

For assist trophies, the vast Skies of Arcadia world also gives us multiple options. Team mates such as Aika, Fina or the dashing Gilder could work, but then you’ve also got the almighty Gigas right down to the cute Cupil that could swoop in. Or, screw all that and bring Pinta back! And if any of those names mean nothing to you, you really need to dig out your Dreamcast. Sheesh.

If any character from SEGA history could prove to be a better, worthier fighter than Vyse, then I’d like to hear it!

When Konami and Hideo Kojima had Solid Snake be added to Brawl a few years ago a lot of people liked it very much but I was thinking he just didn’t fit with the overall Nintendo style of the series. But then I was reminded of a character that was more fitting to the style of Smash Bros and would bring a new light to this long forgot character from the 90’s Sparkster from the RKA series. 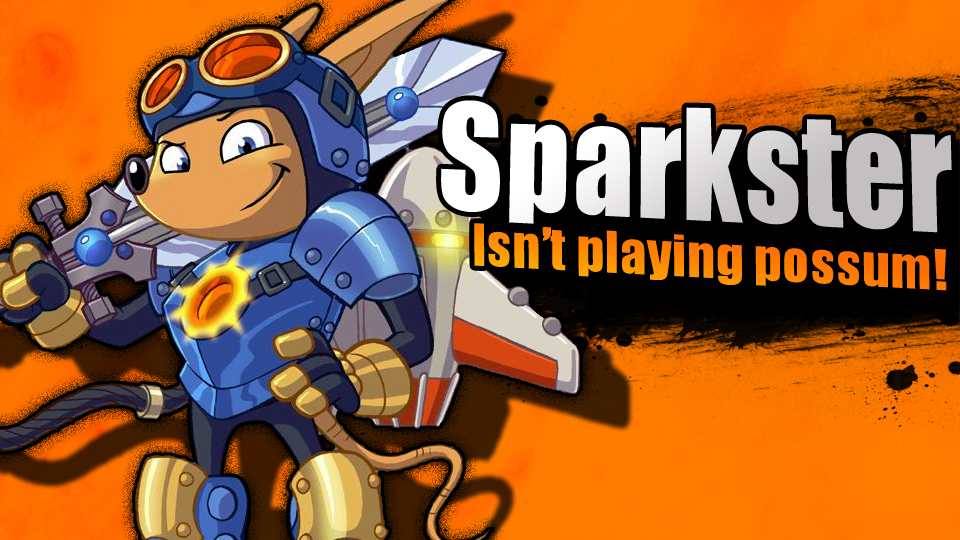 He has made a few cameo’s in Konami games himself and did make a return in 2010 with the download title Rocket Knight, a title which sadly arrived with a criminally low amount of fanfare. Though don’t you think Sparkster is a great choice for a playable character in Smash Bros? He is a swordsman and has a rocket pack on his back to allow him fo a great way to getting back into the fight if smashed out into no man’s land.

Granted we have a few swordsmen in the series so Nintendo wouldn’t want to have one more added but I say he is one with a jet pack, YOU CAN’T TOP THAT!

“Who would you want to see in Super Smash Bros?”

It’s a question that almost everyone has an opinion on. And for me, it’s a very hard question to answer. A vast number of games I love lend themselves to Smash Bros perfectly; from Final Fantasy’s Terra to Ace Attorney’s Phoenix Wright and Persona 4’s Yu Narukami. However, the vast majority of these cases already exist in one form or another in other fighting games, such as Dissidia, Persona 4 Arena, or Marvel vs Capcom. And as such, I think it would be cheating to include them for my choice. Though to be fair, it never stopped the Blue Bomber.

As such, I think the choice I would go for is one that many people wouldn’t expect. I thought about classic characters (such as Spyro) to modern day creations (such as Bayonetta) and even some indie gems (such as Quote from Cave Story). But I think the choice I made fits in with the Smash Bros universe ideally, and would be a perfect addition to the cast: Raz from Psychonauts. 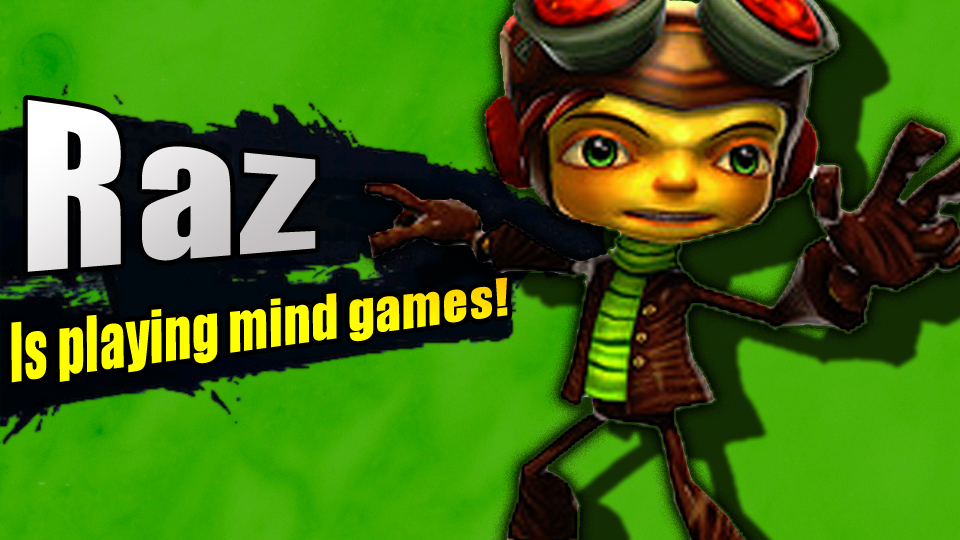 Yes, the protagonist of one of the finest, and most unique platformers I’ve played. And although he has never appeared on a Nintendo console, I don’t think that would bar his inclusion. His vast array of PSI-moves would lend themselves to the traditional attacks found in Smash Bros (such as the PSI Shield for blocking, Pyrokenesis for special attacks and Levitation for his triple jump). A vast stage combining the minds and levels of the game would be very fitting, all centred around Sasha’s Mind Tumbler.

He is also a great character and personality that wouldn’t look out of place at all in the games. And we could have tons of fun with Final Smashes. After all, who wouldn’t want Bowser getting K.O’d by the being known only as Goggalor, or Mario being bested by The Milkman (his milk is delicious). I do believe he’d be a great inclusion to the game, and give Psychonauts the extra recognition it deserves.

Do you agree with the team? Who do you think should be added? Tell us in the comments section below.