Home » Articles » A Summer Of Sonic 2011 Extro: What Exactly Do You Get An AAUK?

A quick little story about the end of SOS 2011 I have yet to tell.

My feelings towards SOS have always been rather conflicting, which probably causes my friends no end of issues. I’ve always wanted it known I was responsible for it, but to get no more thanks than a simple thanks and acknowledgement. To be remembered as the person who did all the stuff I did for it and actually to fade away after a simple goodbye safe in the knowledge it wouldn’t get cocked up. Sounds simple, but probably not. Echo could probably tell you stories about me eating myself up over various things – no one was happier that I stopped. So yes it was an odd situation when we came to the end of SOS with AAUK… I wanted all the stuff I did acknowledged, but didn’t want any kind of fuss as I hate anything like that.

I’m a difficult bastard aren’t I?

Anyway, one fan (or group of fan, I’m not sure) came up with something I found absolutely hilarious and felt was fanatically thought out; I was confronted at the beginning of the day by fan David Austin and friends and presented with what looked suspiciously like an Eggman storage capsule. Luckily there wasn’t any furry creatures inside, there was though this: 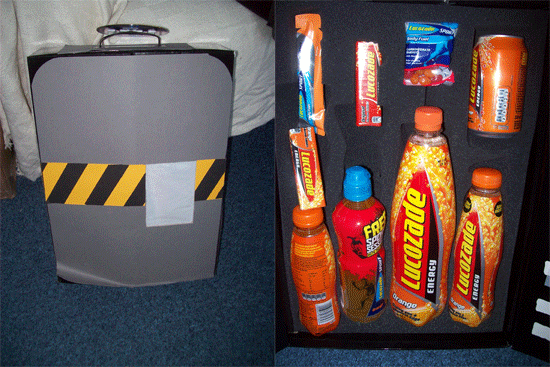 Its become something of a joke about my association with Lucozade Energy drinks, in actuality I don’t drink tea or coffee so it was one of the few things that could give me a caffeine-like boost to keep going. Truth be told it was keeping me going to the point of being “lifeblood” as I termed it – and was being deadly serious. Gavvie brought me oodles of bottles of the stuff on the day just to keep me going, ironically I ended up having to consume so much I ended up poisoning myself and I was actually badly ill on the day, severely so by the closedown as my body litterally began to shutdown. I was quite out of it for about two weeks afterwards as I’d successfully damaged my digestive system. Errrrr…. whoops?

Still this, as a thank you was awesome. It showed creativity and a lot of thought and was presented to me “in thanks for all your hard work”. So thank you David, that’ll do me. That’ll do me nicely…