It’s our birthday today, YAY! We would have a cake but it would inevitably be some form of untruth.  In light of our perpetual status as “that one that isn’t Retro or Stadium” and in light of the fact people actually hung around Cage Dome or SonicAnime.net or somewhere instead of being awesome, cool, highly sexually attractive and ALIVE like we are. I thought it’d be nice to dig through the old archives just to show you that things have really changed down the years, and to remind you of some of our most awesome and least seen moments.

Originally of course, Sonic Wrecks was a small part of KevsKingdom.com, my original website back in the day.  It’s actually 14 years since the original thing went up on Geocities. Fear the coolness of the original logo, rendered in all wondement via the power of Windows 3.1!

Okay, the original KevsKingdom.com was a bit…well, lame. By 2004 it was looking a tad better.

The ArchangelUK handle actually came from a character called “Archangel” from KevsKingdom.Com who lived in the dungeon/basement, ate rats and generally did terrible things to people. True story! 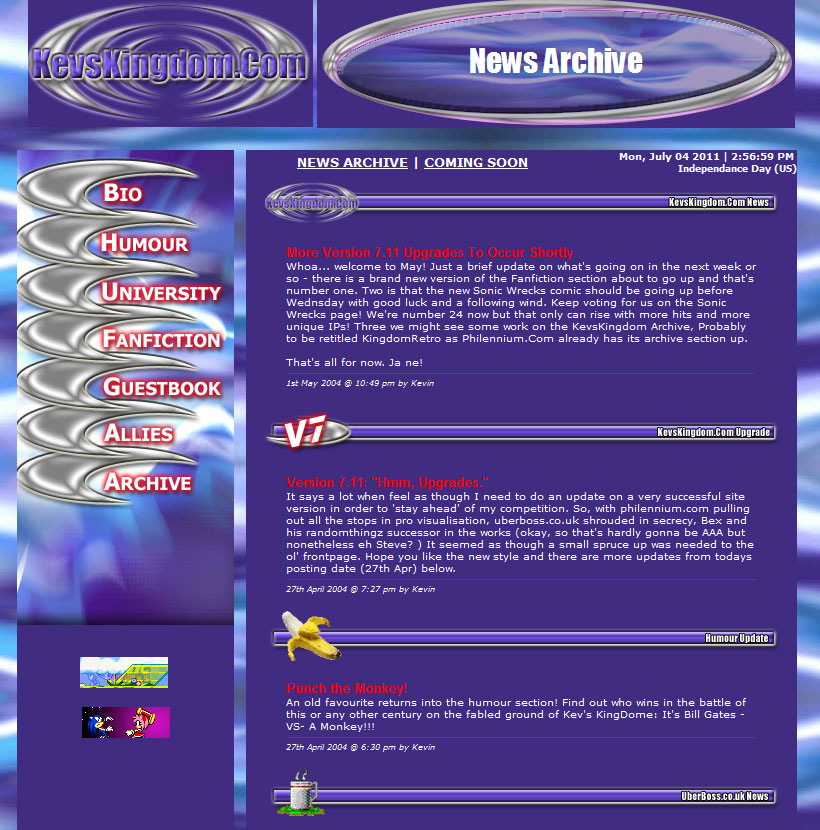 Some things didn’t change much over the years… we still use the “Shadow Head” logo and people still rip it off claiming it was something they drew.

Yes we have not changed our link button since 2004.  Shut up.

Sonic Wrecks became the focus of my attention, as such it got rapid updates… here you can see some comic titles that simply never made it.

By Christmas 2005, we had reached version 3.22 and things were really starting to pick up for the website.

By 2006 Sonic Wrecks had begun to really get a name for itself and 2006 was a really big year for the community and SW itself. Contacts were made, awards were won, we were part of the first Summer Of Sonic event for Sonic’s 15th birthday, SW began to really impress people.

Version 4.0 made the previous version look very amateurish at the time, but even this was rather short lived.

Because in December we would have the “Ragnarok” event… which would see SW be slowly attacked and taken offline by what was coined the “red weed” virus (a nod to War Of The Worlds) over the course of several weeks/comics.  This resulted in parts of SW catching fire, amongst other things.

Ultimately this lead to the “Traitor’s Gate” comic where it was revealed that devious Hawk was in league with Metal Sonic all along, she overrode SW’s system and on 9th December 2006 people logged on to Sonic Wrecks to find, well…

And that was that for a few months, only a letter on the front page gave any indication as to SW returning initially:

However, after a few months hiatus planks of wood appeared, along with signs of the site being “under re-construction” which inevitably revealed Sonic Wrecks 5.0

This design (or variations of) was stuck with for almost two years, during which time we actually created a vast array of themes… which no one then ever used. Sigh.

Several were in response to games, holidays, etc.. But there was “Amy Wrecks” a re-tread of the classic SW April Fools event.

Another SW favourite, the Christmas skin, aka “Merry Wrecksmas”

Sonic & The Secret Rings based “Masters Of The Desert”:

The Mario & Sonic At The Olympic Games / April Fools related Nintendo theme, aka “That’s-a No Good!” (Note “Radio Bowser” and “The Luigitory”.)

And even one for Sonic Rush Adventure called “Sonic ShipWrecks”!

SW changed again during 2009, with the last version of the website before it moved over to WordPress, WordPress would initially mimic this theme strongly as version 7.0.

One notable thing is that SW.com shifted in colour.  Traditionally black and “Shadow red”, SW started using light and dark shades of gray as well as a darker burnt red for the shadow tattoo logo which has transitioned into the role of the Shadow head as our synonymous logo.

And there we go, we’ve reached the present.

What will the future bring for SW? I don’t know.  Though I suspect version eight will hang around for a while yet.

Thanks for sticking with SW for seven awesome years, here’s to another seven beers.